Coronavirus and school exams: despite plan for grading pupils, there may be trouble ahead 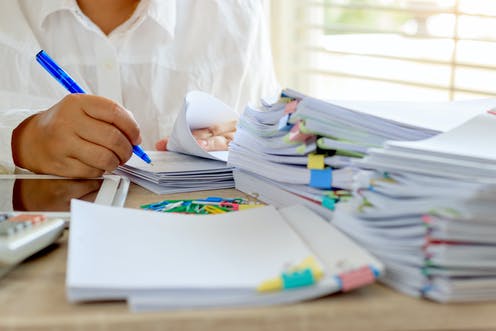 Two weeks after the A-level and GCSE exams were cancelled, English assessment authority OFQUAL has decided how grades will be decided for these qualifications. They will be awarded by teachers in the first instance, and these recommendations will then be moderated by exam boards.

The fact that this announcement was delayed twice suggests that the prime minister was not aware of the problems raised by the exam cancellation when he announced it. This demonstrates the chasm of understanding between those who work in it and those who govern it.

The prime minister closed England’s schools in a press conference on March 18. This was accompanied by the almost casual announcement that exams would be cancelled for summer 2020. With no indication given of how awards would be determined, students with their futures dependent on the outcomes of these exams were cut adrift. Kevin Courtney, leader of the largest teaching union, acknowledged on that night’s Channel 4 News that his organisation had only just been consulted by the education secretary about the closures.

Latest of many battles

The award of exam grades has long been a contentious issue. Successive governments have changed their format and grading system several times. Restricting exam boards to only overseeing this process unleashes a trial of strength between a number of actors in the field. Each of these is vulnerable to, or has its own, strong vested interests.

Teachers know the exam candidates best, of course. But they may feel strong pressure to raise the assessment grades from understandably anxious students, sharp-elbowed parents, and in some cases their own employers. In this competitive market, schools use exam results to recruit future students and to hold teachers accountable. This is one of the reasons the government became sceptical of examinable coursework marked by teachers and mostly ended it in recent reforms.

Exam boards are pulled in opposing directions. They are effectively businesses in competition with each other, and want to avoid a reputation for severity in assessing students for fear of losing their customers – schools.

On the other hand, they work in harness with government agencies. The government will seek to stop grades being exaggerated – but will also want to avoid a scandal like that of 2002, when A-level pass marks were pushed up to stop an increase in A grades. In moderating the 2020 results, exam boards use schools’ prior performance as a guide. This will punish students who attend schools with a record of poor performance, and reinforce their disadvantage.

The universities and colleges to which A-level and GCSE candidates hope to go on have varying interests depending on their place in the market. Less popular institutions will worry that inflated grades will cause them to lose students, as candidates turn to universities which they had previously thought were out of their league.

Popular institutions may fear that their practice of making more offers than they have places will backfire. If higher grades on average are awarded, all of the students they offered places to will arrive, when some would normally not reach the threshold. The government has already admonished some universities for rushing out unconditional offers to applicants in the lockdown.

The announcement about the 2020 process raises at least as many questions as it answers – how grades should be established, how their integrity will be guaranteed, and what the impact will be on the national education system.

Everyone in the education system is determined to be principled and reasonable. However, this approach has risks associated with it – this year more than ever. Everyone is aware of the possibility of “Wild West” behaviour by other actors and will be tempted to factor it into their own calculations: for example, schools changing their grades in anticipation of over-grading by other schools or sweeping downgrading by the exam boards.

Exam results are the currency of the education marketplace. It is telling that the government did not appear to grasp the impact of destabilising this currency. OFQUAL has still not established any appeals procedure for the exam grades to be awarded, though it recognises that one will be needed. Cancelling exams is the equivalent in an economic market of closing the central bank and inviting businesses to set interest rates and print money. The results will at the very least be unpredictable.

Matthew Cole does not work for, consult, own shares in or receive funding from any company or organisation that would benefit from this article, and has disclosed no relevant affiliations beyond their academic appointment.

2020-07-03
Previous Post: Children’s asthma and sleep apnoea has improved during lockdown – a clinician explains why that might be
Next Post: Coronavirus: why it’s dangerous to blindly ‘follow the science’ when there’s no consensus yet