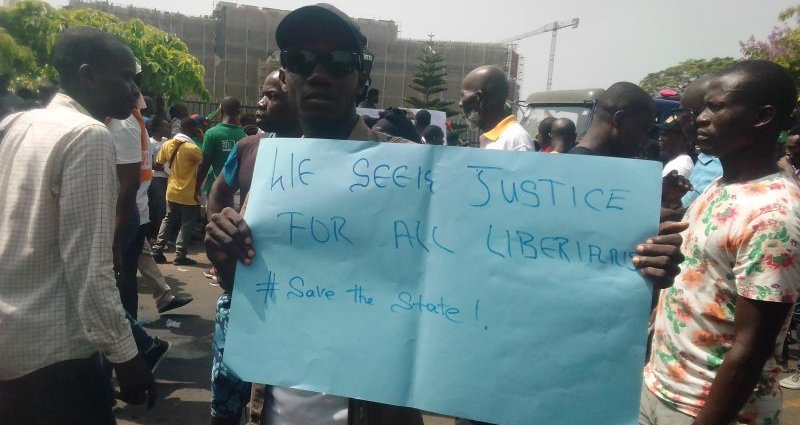 Liberians recount the June 7 protest that led to a shutdown

Protester poses for a photo under the banner “Save the State,” photo by Mark N. Mengonfia, June 7, 2019, Monrovia, Liberia, used with permission.

This article is part of UPROAR, a Small Media initiative that is urging governments to address digital rights challenges at the Universal Periodic Review (UPR).

An internet shutdown last year on the day of a major protest in Monrovia, Liberia, continues to generate tension between citizens and the government over the right to freedom of expression online.

On June 7, 2019, a  group of predominantly young people gathered in the capital Monrovia, under the slogan, “Save the State,” to protest against poor governance and make demands of President George Weah’s government to account for some missing $16 billion Liberian dollars — about $80,282,272 United States dollars.

Throughout the day of the much-publicized protest, the Liberian government disrupted access to social media services for hours.

Social media has taken over traditional forms of communication in Liberia since the late 2000s, and Facebook, in particular, has been an eye-opener to the world. A 2018 social media statistics in Liberia report showed that 10 percent of the country’s estimated 3.5 million citizens use social media, specifically Facebook, with men accounting for about 60 percent of users and women, about 40 percent. Youth between 25-34 years old accounted for 184,000 of these users.

These new opportunities for free expression across a wide range of online platforms have pushed the government to adopt measures to restrict users’ rights to freedom of expression and access to information. According to critics, the Liberian government resorted to disrupting social media access on June 7, to prevent live protest coverage and the mobilization of protesters.

Fidel Saydee, a Liberian journalist and former manager of Roots FM, told Global Voices that the disruption prevented his radio from effectively covering the protests:

The action, which was condemned by a cross-section of the Liberian society, made it impossible for the services on our website, my tuner and other outlets to be broadcast.

At the time, Saydee was the co-host of the “Costa Show,” an online platform operated by Henry P. Costa, a strong critic of the Weah government and lead organizer of the June 7 protest. Saydee told Global Voices that their “listeners could not have a feel of the events.” He continued:

Onsite reporters could not file in live reports through our social media platform for onward transmission on air. On-air personalities were left to wander in oblivion as to what was happening outside of the studio.

Boakai Amara Kamara, who also works for Costa, described the action by the Liberian government as saddening, saying that it was “an act against freedom of speech.’’

The “Costa Show” was a provocative radio talk show that also streamed online via Facebook. The show — and the radio itself — have been known for their criticism of poor governance by administrations of former President Ellen Johnson Sirleaf, and her predecessor, current President George Manneh Weah.

Others also decried the disruption of social media during the June 7 protest.

Some citizens told Global Voices they could not communicate with their relatives abroad via Facebook Messenger and other messaging and VoIP apps. Many also viewed the government’s decision as a total violation of their right to freedom of expression and information in keeping with international human rights instruments, as well as Article 15 (a) (b) and (c) of the 1986 constitution of Liberia, which speaks to freedom of speech, information and expressions.

Diana Teah, a resident of the Township of Johnsonville and a student of the African Methodist Episcopal University (AMEU), told Global Voices that the June 7 protest was very historic:

The government of Liberia, which is supposed to uphold freedom of speech, took on a very bad trend on that fateful day.

She described the disruption as an “embarrassment to the people of Liberia” and other nationals living in the West African nation:

Not only for us but the international observers, those who were present here that day, [they] were all embarrassed, maintaining that social media is one of the important places where we receive and give out information! I advise that the government of Liberia pays attention to the growth and development of our country that is dying rather than focusing on shutting down Facebook.

Other Liberians, however, defended the government’s decision to disrupt internet access, holding the view that it is the government’s prerogative to provide security. Alicemae Kwapo, a Liberian who currently resides in the United States, said the ‘’government was right, they performed their responsibility.’’

Via a Facebook Messenger interview, Kwapo indicated that shutting down social media services “on that day actually had far less impact on the people than the demonstration did. …The general public did not know the risk and reason for which the Liberian government acted the way it did during the protest day,’’ she added.

While the government did not provide a reason for the shutdown, intentional internet disruptions are considered a violation of international human rights standards.

Liberia, a state party to the International Covenant on Civil and Political Rights (ICCPR), should refrain from ordering such disruptions and take steps to ensure the rights of users to freely express themselves and access information online.

2020-08-01
Previous Post: Popular YouTube channel documents what it is like to be black in Japan · Global Voices
Next Post: Anti-pandemic measures in their home countries deter EU tourists from visiting North Macedonia · Global Voices