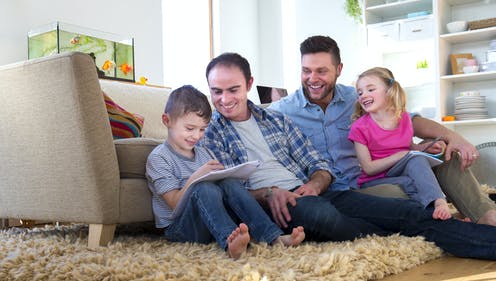 English primary schools will follow revised guidance on education about relationships from September 2020. The guidance emphasises teaching about diverse families, and this approach includes recognition of LGBT+ people.

For many schools, this will not be the first time children have been taught about same-sex parents. Since 2011, the charity Stonewall has
encouraged schools to include same-sex parents in their discussions of families. Stonewall has provided schools with the Different Families, Same Love teaching materials which recognise children’s diverse families.

But my research shows that this teaching approach, focusing on families, has limitations. It introduces diverse families through the lens of the more idealised and better understood heterosexual nuclear family. This can reinforce the idea that a heterosexual, monogamous, child-centred family relationship is what constitutes a “normal” family.

I conducted research into how children responded to the Stonewall teaching materials. I found that children draw on their own, diverse family experiences to understand how some children have “two mummies” or “two daddies”. For example, children adopted by heterosexual parents considered themselves, and were regarded by their peers, as having “two mummies” and “two daddies”, because they had both adoptive and biological parents.

Children could relate to the idea of “two mummies” and “two daddies”, even if they didn’t initially associate it with same-sex parents. And as discussion progressed, this paved the way to understanding same-sex families, where a child might have “two mummies” or “two daddies”.

But my research also found that children were likely to push back against the idea of same-sex families. Through a game and discussion, children often rejected the likelihood of same-sex parents by finding elaborate heterosexual explanations for “two mummies” and “two daddies”.

The research shows that there is a distinction between children’s awareness of same-sex families, and how they are able to feel about them. Understandably, children turned to prevailing understandings which allow heterosexual nuclear families to “make (more) sense”.

This suggests that equality initiatives which focus on families should not be the only approach for ensuring LGBT+ inclusion.

Stonewall’s Different Families came in response to earlier reactions to an academic project which ran from 2006 to 2009, called “No Outsiders”. This groundbreaking project explored more challenging approaches for disrupting the (hetero)sexism which underlies LGBT+ exclusion and restricts how gender can be expressed.

Activities in lessons included creating alternative fairy tales. Books, such as Harvey Fierstein’s The Sissy Duckling, were also used as a basis for activities in different subjects. However, negative reactions from some parents, amplified by tabloid coverage, overshadowed this project.

In some cases, even the less radical Different Families approach has received push-back. For example, a high-profile protest took place at a Birmingham primary school in response to the school’s own LGBT+ teaching project, developed by the assistant head teacher. This project challenged homophobia and gender norms, and used the Different Families approach for recognising LGBT+ relationships.

Media attention focused on Muslim parents’ objections to any kind of LGBT+ education in primary school, and protests outside the school influenced adverse reactions elsewhere.

In the face of protest like this, the government’s emphasis on the less contentious families approach is understandable. However, this alone is not adequate. Holistic and varied approaches are required and primary school relationships education can begin to support this.

Rather than suggesting particular lessons – excellent resources for lessons already exist – the book considers ways to encourage the development of varied approaches to LGBT+ inclusion. This includes within school subjects which address relationships education, but also as part of broader school responses.

Nonjudgmental inclusion training for all staff allows approaches to LGBT+ inclusion to be developed which everyone can understand and support. These approaches should be context sensitive and should acknowledge each school’s distinct character. They are tailored to the individual school and build on children’s existing understandings. This is something a school-wide survey, for example, could establish.

At its best, education on LGBT+ inclusion in primary schools can create an environment that is inclusive and accepting for all students.

The revised guidance which comes into play from September 2020 may not be enough, but it provides a valuable basis for more inclusive education. Central to this would be varied and holistic whole-school approaches to LGBT+ inclusion which benefit everyone, not just those who are LGBT+.

Joseph Hall received doctoral funding from the Economic and Social Research Council and is currently receiving funding from the British Academy/ Leverhulme Trust in partnership with the Journal of Moral Education Trust.

2020-07-03
Previous Post: The International Labour Organization was founded after the Spanish flu – its past lights the path to a better future of work
Next Post: Five ways online university learning can be better than face-to-face teaching