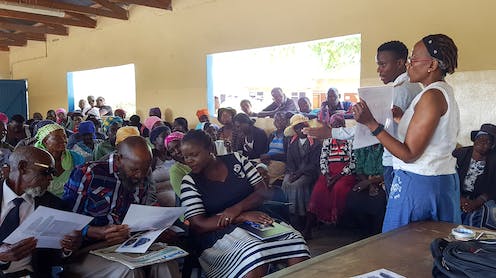 “You know what’s wrong with scientific power? It’s a form of inherited wealth. And you know what assholes congenitally rich people are.” That’s how filmmaker Michael Crichton put it in Jurassic Park nearly 30 years ago. The problem of scientific colonialism has not, however, gone away.

Researchers sometimes carry out fieldwork with minimum local engagement, dropping in and extracting their data like the well-trained crew of a military Chinook. So-called “helicopter research”, where research teams rarely enable local collaborators to steer research-design and often fail to involve local communities or provide local access to data, was a recent topic of debate at a conference on academic integrity. Scientists and ethicists agreed that field research falls short when it comes to academics from high-income countries carrying out field research in places that lack resources.

The colonial footprint of exploration is deeply lodged into the identity of my own research field, which sits somewhere between the geosciences and archaeology. Amplified in Hollywood, the scientist in search of exotic discoveries has captured the public imagination. Neither booby-trapped temples nor rampaging dinosaurs have featured in my academic life, but the explorer mentality has been slow to leave the discipline.

In my early career, field seasons in Africa were spent with colleagues from Europe at the helm of a battered Toyota Hilux, taking sediment samples from the lakes, dunes and peat-bogs of Botswana. There was enough food, water, spare parts and scientific equipment rammed into that vehicle that there was no need to engage with anyone.

That landscape, however, is not wilderness. It is peppered with communities rooted in their environment. Communities we largely ignored. We extracted what we needed and flew our cache of sand 8,000km away to a well-equipped laboratory behind the thick walls of one of the UK’s most prestigious universities. The paperwork stated the sand was “of no economic value” but that is not entirely true. The currency of scientific wealth is data, and we took it without sharing it with those who lived there. This was the status quo of geoscience when I started out my career more than a decade ago. It wasn’t deliberately discriminatory. It was just thoughtless.

In the last few years, as the broader scientific community, particularly in the health sciences, began to reflect on its profession and practice, the insular norms of fieldwork have felt increasingly uncomfortable to some of us. Very few of my research papers include African authors.

Even less have had any impact in the lives of local communities. In the lopsided-land of academic geoscience, those communities were never the intended audience. Career prestige is driven by grants and publications, the impact of which is measured by the number of citations clocked up from other academics.

In a 2020 paper which looked at publications over the last 40 years, researchers found 70% of geoscience articles with a study site in Africa did not involve any African authors. Researchers in poorer countries are often relegated to the role of fieldworkers or administrators, and excluded from the research design, data analysis or publications. As a 2017 study showed, local researchers are left feeling exploited.

Sarah Mothulatshipi, a colleague and senior lecturer in archaeology at the University of Botswana, says she has seen this happen several times in her career. In some projects collaborators “were happy to share the responsibilities of fieldwork but were not so forthcoming when it came to analysing or sharing data. For local students in particular, involvement can feel like it is more about cheap labour than meaningful research apprenticeship.”

At one community meeting in Gweta, on the outskirts of the Makgadikgadi pans (Botswana) in 2019, a village elder told me: “There is a lot of mistrust. People come here with their research vehicles, but they do not talk to us. They do not involve us.”

In Botswana in 2017, the government suspended the issue of environmental research permits out of concern that research was not benefiting the lives of ordinary Batswanans. In the same year, southern Africa’s indigenous San community issued their own research ethics code. San leaders felt “that most academic research on their communities was neither requested, nor useful, nor protected in any meaningful way”.

In recent years I’ve been trying to put right my own failures, reaching out to local communities and collaborators and together finding tangible benefits from our wealth of data. So rewarding was this experience that I returned to student life to study for a postgraduate degress in science communication. In 2022, after asking communities in Botswana what would be helpful to them, we produced and installed information boards on our archaeological findings in nearby villages. A simple gesture that provides local ownership of the knowledge we’ve extracted and generates new tourism opportunities.

Outside of the social sciences, taking the time to listen to local communities is still viewed as a low priority. But things are beginning to change.

It doesn’t have to be this way

A plethora of research papers have called for change and in August 2022, Nature – and all Nature portfolio journals, including Nature Geoscience – announced it had adopted guidelines laid out in The Global Code of Conduct for Research in Resource-Poor Settings. It will ask authors to provide disclosure statements about whether the research design involved local scientists, whether it is locally relevant and are there plans to share it.

The University of Oxford recently adopted a Code of Conduct for Ethical Fieldwork that prompts researchers to ask questions at the planning stage: who are you engaging? Could you conduct a scoping visit to explore the interests and needs of local communities?

The answer to the last question hinges on funders. These are the organisations that could really shift the balance of power within collaborative partnerships. Several, including the European Commission, have adopted mandatory codes of conduct, but few have been so explicit.

Funding requirements to partner with local institutions are not enough. The partnership should be one driven by local priorities and equal participation. In 2022 it feels like there is real change in the air as institutions at all stages of the research cycle begin to scrutinise their systems. It is time to ensure the inherited wealth of science does not just belong to the privileged few.

Sallie Burrough does not work for, consult, own shares in or receive funding from any company or organisation that would benefit from this article, and has disclosed no relevant affiliations beyond their academic appointment.

2023-01-02
Previous Post: Scots strongman Tom Stoltman crowned World’s Strongest Man for SECOND year
Next Post: Brussels sprouts have as much vitamin C as oranges – and plenty of other health benefits