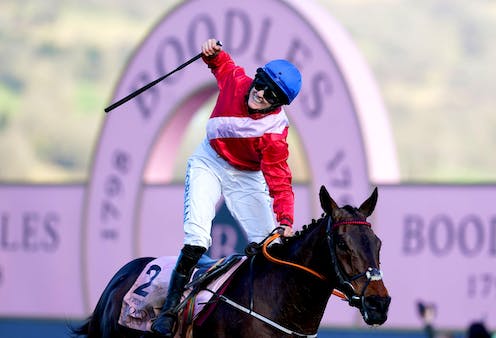 The bookmaker (nearly) always wins, as the adage goes. But if you want to tip the balance in your favour, look to female riders.

Gamblers’ biases have created a situation where punters can make greater returns by backing female jump jockeys. In our recently published research that was funded by the Racing Foundation, my colleagues and I discovered that when male and female jockeys have an equal chance of winning, the odds on horses ridden by women are longer (more profitable) overall.

But while these findings may be a revelation to punters, there is a darker side to our work.

We analysed British horse racing data from 664,536 runners (horses and riders) in National Hunt races across a 20-year period, from January 2001 to January 2021. National hunt races require horses to jump fences and ditches. The races were mixed – women didn’t compete in separate races.

Using starting prices, the odds at the start of a race, we calculated each horse’s probability of winning. We also gauged the expected finish position of each horse by ranking the odds. Then we compared our predictions with the race results.

To our surprise, the results for horses with female jockeys were significantly better than their odds predicted. Indeed, our model estimates that across the study period in a 20-horse race, females would on average finish one place higher than their odds implied.

Starting prices are based on the volume of bets placed. They represent the market’s opinion of each runner’s chance of winning. We found that while the odds predicted race outcomes well, the betting public favour male riders. With less support for female jockeys, their odds are longer than is realistic. But this was not our only surprising discovery.

We also found that the discrepancy between male and female odds is growing. The tendency for the British betting public to underestimate female jockeys has increased over the last decade.

Bettors seem to allow sexist beliefs to harm their winnings – but their attitudes may actually be based on a misinterpretation of the facts. Women accounted for less than 3% of rides in our study period, so punters may find it more difficult to assess female jockeys’ performance than males’.

However, the percentage of female-ridden horses has nearly trebled over the last decade, from 2.4% to 6.5%. There is now more information available about how female riders perform – yet bettors are increasingly underestimating women.

It may be that bettors focus on evidence that supports their opinions. Fewer participants in each race has driven an increased win rate among both male and female jockeys. While the male win rate increased by 1.8 percentage points, female jockeys’ win rate rose by 4.7 percentage points across the study period. Bettors seem to be ignoring this information. Or perhaps they are adapting their beliefs at a slower pace than women’s performance is improving.


It is often more comfortable to tell yourself that an unexpected event is an exception, as it helps you avoid cognitive dissonance. For example, bettors may acknowledge Rachael Blackmore, the first female winner of the Grand National, is a talented jockey and make an exception for her, but still avoid betting on other female jockeys.

Read more:
Why do we feel bad when our beliefs don’t match our actions? Blame ‘cognitive dissonance’


We found some evidence that this is what’s happening. When we excluded the top female riders from our analysis, underestimation of female jockeys increased. Regardless of whether the bias is conscious or unconscious, the public underestimates female jockeys.

Our analysis raises questions about whether the racing industry itself is biased. The low number of female jump jockeys suggests women may face barriers to entering this career. It is curious there are not more professional female jockeys when the majority of racing’s trainee stable-staff are female and women make up roughly half of all point-to-point riders (an amateur form of National Hunt racing). Contrary to media reports that female jockeys are treated equal to males, our analysis suggests gender bias persists in British horse racing.

Measuring the behaviour of bettors offers a window into people’s attitudes towards women more generally. The assumption in Britain is that equality for women in general is improving, but our study shows this is not true in racing. And if the public chooses to avoid backing female jockeys even though they could achieve better returns, how much sex discrimination still exists in our society?