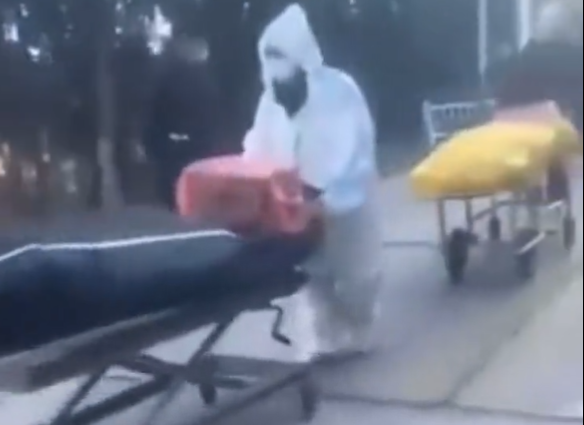 HARROWING images from China show long lines of coffins and body bags being taken into crematoriums as the Covid “mega-tsunami” takes hold.

The government has now stopped releasing official daily figures for infections and deaths, but it’s estimated at that least 5000 people are dying a day.

China is now in the grip of a Covid surge in the wake of its leader Xi Jinping finally abandoning his disastrous Zero Covid policy of draconian lockdowns.

Its population has low levels of immunity because of the lockdown, which stemmed in part from its botched attempt to produce an effective vaccine.

Crematoriums are reportedly already working 24 hours to cope with the number of dead soaring as huge queues of hearses line the streets.

Footage claiming to be from a crematorium in the city of Tianjin shows a long line of red coffins, a common colour for them in the country.

Other harrowing footage shows a long line of bodies being taken into a crematorium by workers in hazmat suits.

According to epidemiologist Eric Feigl-Ding, many Chinese hospitals even “top-level” ones in the capital Beijing are “running out of oxygen”.

Dr Feigl-Ding is chief of the Covid Task Force at the New England Complex Systems Institute and one of the first scientists to warn about the ability of Covid to spread when he worked at Harvard.

He said China was being hit by a “mega-tsunami” of Covid but warned the worst is “yet to come”.

Other footage from inside one of China’s Covid-ravaged hospitals, shows wheelchair-bound patients just feet from corpses.

According to health data analysts Airfinity, daily cases could reach 3.7 million per day in January and 4.2 million in March, up from the current level of one million.

They estimate there are already 5000 deaths a day in China, in contrast to the 7 officially admitted to by the government.

The virus is now spreading largely unchecked across the country, with doubts mounting over China’s statistics, which show no new Covid deaths reported for the six days through Sunday.

Beijing-based doctor Howard Bernstein said he has gone from never having treated a Covid patient to seeing dozens a day.

Patients are arriving at his hospital in ever-increasing numbers with almost all elderly and many very unwell, he said.

“The hospital is just overwhelmed from top to bottom,” Bernstein told Reuters at the end of a “stressful” shift at the privately owned Beijing United Family Hospital in the east of the capital.

He said the hospital’s Intensive Care Unit “is full” as are other wards.

“A lot of them got admitted to the hospital,” he said.

“They’re not getting better in a day or two, so there’s no flow, and therefore people keep coming to the ER, but they can’t go upstairs into hospital rooms. They’re stuck in the ER for days.

“The biggest challenge, honestly, is I think we were just unprepared for this.”

The draconian Zero Covid policy saw the population forced to take continual tests for Coronavirus and millions put into lockdown, even if only a small number of people were testing positive.

Horror images showed those infected being dragged off to quarantine camps and even welded into their homes by brutal ‘Big White’ enforcers.

But a wave of protests following a fire in which the deaths of 10 people were blamed on the harsh lockdown led Xi to dramatically ditch ‘Zero Covid’.