‘You can only take so much pressure’: Residents facing €68,500 bill to fix defective apartments 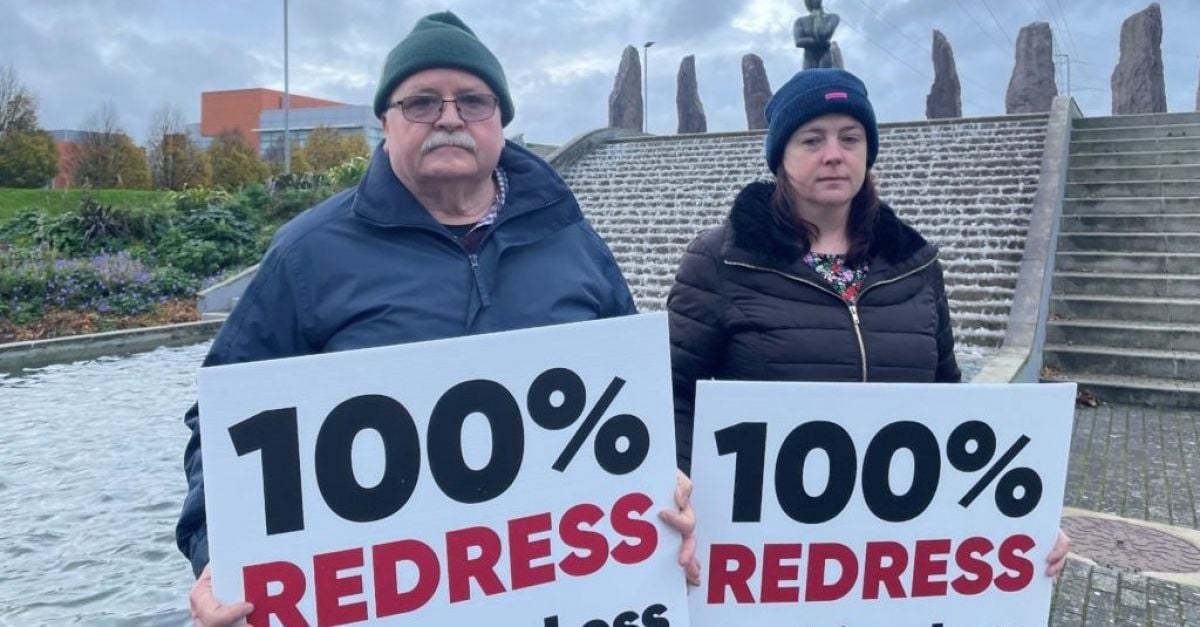 Sam Doran has many reasons to be angry, but over the course of a taxing, two-hour conversation detailing how and why he believes he has been wronged, a crackle of emotion betrays his level demeanour just once.

“I just can’t turn my back on these people,” he says, sitting in the lounge of the Aspect Hotel in west Dublin last November. His voice trails off, just slightly.

Sam (64) owns a one-bedroom apartment in a building that has been deemed unsafe due to fire safety issues. He, along with other residents of The Crescent, Dublin 12, face possible eviction if the defects are not remedied.

In August, apartment-owners were told they must pay €68,500 to fix the problems in The Crescent. It was the kind of news that upends the fragile equilibrium of individual lives, as a cost-of-living crisis rages all around.

Odette (44), Sam’s wife, is sitting across from him. “Everybody was in disbelief.”

“Being human, you can only take so much pressure,” Sam says, invoking the Priory Hall scandal of the early 2010s.

Tallaght-born Sam is soft-spoken, balding and sports a bushy moustache. Most people around The Crescent knows him – he has lived there since 2005, and has a contract to operate cleaning services in the building.

Over the years, he has been The Crescent’s ‘go-to’ man: locked out, maintenance bits here and there, whatever. “I’d help [neighbours] with little things.”

“I was reared around helping people,” Sam says.

Perhaps in part down to this reputation, Sam found himself in a new role. Almost unwittingly, he and Odette have become figureheads in a movement to save their home, and homes of others. The fight has brought them to the gates of Leinster House.

“It’s gone bigger picture for me and Odette,” Sam says. “We’re not just looking for [help] ourselves, we’re looking for everybody.”

Sam and Odette rented, for years, in Bray. Sam is a “hammer and nails” man – he spent time on building sites, operating machinery, then moved into property management, and contract cleaning. Odette worked different jobs, too – she was waitressing when she and Sam decided they wanted to buy a home, in 2003, and finally get a place for themselves.

They settled on The Crescent and everything that came with it. A 232-unit apartment building in the sprawling Park West complex, it came packaged with an aspirational Celtic Tiger lifestyle, marketing material promised. It appealed to Sam and Odette, like it did to many.

The couple settled on a one-bedroom unit in the apartment complex, developed by Dublin-based firm Harcourt Developments and built by the defunct P Elliott & Company. They saved and borrowed, first for the deposit, and then the mortgage.

They did their due diligence, got a surveyor in, and bought the apartment from the plans for IR£179,500. It was the first apartment in the entire complex to be sold.

Odette remembers driving from Bray to Clondalkin to see the complex in construction. It was an exciting time.

On August 16th, 2022, in a Zoom conference with the building’s Ordinary Management Company and representation from Keenan Property Management – the building’s management company – The Crescent’s apartment-owners were told that they were living in a defective building.

An earlier inspection of the building had found numerous fire hazards: gaps in the wall where there should have been fire stopping, and around doors and pipes.

These defects stemmed from the original construction process. “Essentially, when we moved in there in 2005, we moved into a defective building, unbeknown to ourselves,” Odette points out.

Dublin Fire Brigade would later write to residents of The Crescent, on October 28th, confirming that “fire safety deficiencies” had been identified, and that remediation work should be “commenced immediately”.

The implications would be seismic, if these works were not carried out, owners were told. Insurance companies would pull out. That would have consequences on mortgages. The prospect of an evacuation order loomed.

In living rooms throughout the building, the same questions were being asked. Where would the money come from? How can we afford this?

“You’re living under a threat,” Sam reasoned. “Do you have a home? Do you not have a home?”

Harcourt Developments said in an email that they were “surprised and disappointed” to hear of the issues at The Crescent, but stated that the firm bore no responsibility for the “alleged” defects.

They also stated that the complex was built to the highest specification by P Elliott between 2003 and 2005.

“For the avoidance of any doubt, the building was certified as fully compliant with building and fire regulations at the time.”

Protestors and residents of The Crescent at a cost-of-living rally, pictured with actor Liam Cunningham.

Sam was never politically active before that faithed Zoom call in August, he says. He’d never attended a protest in his life.

New details would emerge in the weeks that followed: a fire safety cert had been issued in 2003, two years before the building was completed. It was beyond comprehension: how can you issue a safety certificate to a building that doesn’t yet exist?

The injustice of what owners in The Crescent faced energised Sam and Odette.

Not a month after being landed with news of the defects, they were standing outside the Dáil with a handful of others pleading for Government assistance. On the Luas into town, Sam almost felt embarrassed, clutching to placards reading, ‘100% REDRESS, NO LESS’.

After that, he didn’t look back.

The Crescent is not the only building dealing the fallout of defective building practices during the Celtic Tiger.

It is estimated that 100,000 homes built in the State between 1991 and 2013 are defective, according to a July 2022 report from a Government-appointed working group. Properties were built without adequate fire safety material, and various other structural defects.

Now, an estimated €2.5 billion is needed to make these homes safe again.

In October, owners at The Crescent voted against paying for remediation out of their own pocket.

Not Our Fault, a campaign seeking 100 per cent redress of costs incurred from remedial works, has gathered pace in recent months. Owners of apartments in The Crescent – along with numerous other defective housing developments up and down the country – are calling on Minister for Housing Darragh O’Brien to implement a redress scheme, to cover the soaring cost of remedial works.

Through their campaigning, Sam and Odette learned of other developments facing similar problems: among them, The Metropolitan, in Inchicore, and Hunterswood, in Ballycullen.

On a biting December Wednesday outside the Dáil, Sam said he would be a thorn in the side of Mr O’Brien until a scheme is delivered. Others stood around with placards, representing housing developments in Mullingar, Shannon, other developments in Dublin.

Sam (far left) at a December protest outside the Dáil. Photo: Fiachra Gallagher.

Responding to queries from BreakingNews.ie, the Department of Housing stated that the Programme for Government “sets out a commitment to examine defects in housing”, and “assist owners of latent defects properties by identifying options for those impacted by defects, to access low-cost, long-term finance”.

Mr O’Brien established a working group to examine defects in housing, the statement noted earlier in December, and confirmed that the minister intends to bring proposals to Cabinet on a scheme to assist affected homeowners.

The minister previously stated that he intended to bring proposals on potential supports before Christmas. These proposals to have not yet been put forward.

The statement also noted that given the scale of cost and lengthy potential time-frame in identifying defective complexes and houses, “resources and work will therefore need to be prioritised”.

“In this regard, it would not be appropriate for those in charge of affected buildings to delay the undertaking of any remediation work that is considered necessary from a life safety point of view.”

“We need answers now, because time is ticking,” Odette says.

They’ve appeared on Prime Time to speak about The Crescent, and given interviews to various other outlets.

They are often stopped, around and about their apartment building, to be thanked for their campaigning.

But what hat they really need, Odette says, is more home-owners from other affected developments to come forward.

Over the course his conversation with BreakingNews.ie, Sam sometimes goes off-topic, speaking about values, lessons his father taught him, being straight with people. But he always circles back to his original aim.

“To be honest, I should be winding down, not winding up – this is probably going to be my last good fight, my last hurrah.

They are not angry about the position they find themselves in – they don’t have time to be.

Instead, the couple present as determined, and speak with an urgency. It’s not surprising, given the anecdotal accounts they hear, weekly, daily, from homeowners caught under the weight of this scandal, the mental toll of a looming €68,500 bill, or threatened evacuation.

“Someday, we might get time to sit back and realise what the f**k they did do to people,” Sam says.

It is not immediately apparent who his anger is directed at.

2022-12-25
Previous Post: ‘America is back’: how Joe Biden repaired US relationships with the rest of the world in 2022
Next Post: Hungary and the EU are in an endless dispute that challenges the very foundations of the union