Christmas in wartime: how Britain coped with the ‘bleak midwinter’ of 1942 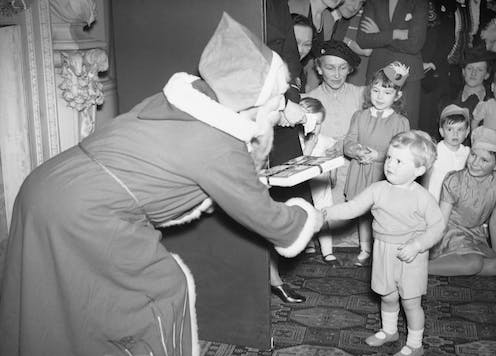 On Christmas Eve 1942, the Manchester Guardian recalled that the first world war had only lasted four Christmases. Now, Hitler’s war also had “four to its discredit, each one more austere than its predecessor”.
Christmas 1942 would be a sadly pared-back affair. Cards were tiny and printed on thin card. Wrapping paper was not available. Festive food and drink was in desperately short supply.

Nevertheless, hope was abundant. In the course of my research into how the British press reported the second world war, I’ve unearthed from the newspaper archives plenty of examples (sadly mostly behind paywalls) of how the home front coped with the privations of total war. And in the midst of the glum reflections on a wartime Yuletide, there was also a great deal of optimism in December 1942.

In November, British forces had defeated the Germans at El Alamein. The presence of growing numbers of American GIs in Britain and resolute Red Army resistance at Stalingrad made it apparent that Allied victory must, eventually, come.

Acute shortages of festive drinks caused great concern, however. In a playful Christmas Eve reference to Sir William Beveridge’s report on social security which had been published to great acclaim on December 1, the Manchester Guardian offered its own “beverage report”. This lamented that “wines and spirits are not only scarce but dear”. The author regretted that his own supplies included “several bottles with less than one drink in each of them” – and he saw little prospect of obtaining fresh supplies.

Turkeys were also in desperately short supply. The Communist Daily Worker predicted that only one customer in 300 would be able to obtain the traditional Christmas bird. The Times agreed that “many British households are wondering if they will get their turkey for Christmas”.

While generous American troops in the UK had surrendered their Thanksgiving turkeys, the Times feared it was too little too late: “We have grown accustomed to do without, and Christmas without a Turkey will inspire a gentle if not too serious a sadness”. It advised readers that they might have to eat beef “and we ought to deem ourselves lucky to get it”.

Sadly, there would be few Christmas puddings to follow. The Ministry of Food had issued a declaration that a large number of puddings had been manufactured, but the Manchester Guardian denounced this as the ministry’s “Christmas joke”. Manufacturers had no ingredients to make puddings, and worried housewives were already calling their grocers to ask where they would find the puddings the ministry had promised them.

Looking on the bright side

The BBC’s weekly magazine, The Listener, regarded the lack of luxury as an opportunity to think about the true meaning of Christmas and contrast the hope it inspired with the state of the world. Cities were being “wrecked by concentrated bombing” and “whole sections of the community” were being “mercilessly put to death for no other reason than that of race or religion”.

Indeed, on December 17, Allied governments had revealed for the first time the true scale and nature of the Holocaust. Foreign secretary Anthony Eden told the House of Commons that the Germans “were now carrying into effect Hitler’s oft-repeated intention to exterminate the Jewish people in Europe”.

The Times attempted to raise its readers’ spirits with images of a nativity play in the crypt of St Martin-in-the-Fields, American soldiers inspecting a huge Christmas tree in St Paul’s cathedral, and Miss Fay Compton as Prince Charming in Cinderella at the enormous Stoll Theatre in London’s West End.

But it was the American presence that offered the greatest inspiration to optimism. From her home in Cheyne Gardens, Chelsea, Times reader Gerda M.H. Morgan wrote to the editor to celebrate another important import from the US: “At this Christmas, when so great a number of our American ally are in Great Britain, it is pleasant to recall that Father Christmas himself first came to this country from the United States.” Morgan speculated that the sleigh loaded with presents and drawn by reindeer was, probably, also an American creation.

The Daily Mail offered the perspective of a soldier serving overseas in the form of a poem. It began:

Tell me how it went, and if the kids had fun,
It isn’t much like Christmas here, You don’t hang holly on a gun.

The Mirror offered austerity Christmas game suggestions for children. These included “button matching” – hiding matching pairs of old buttons around the house and challenging the children to find them. “Black-out guess” involved identifying household objects by touch in complete darkness. It advised that “a raw sausage always produces shrieks of terror”.

In its edition published on Christmas Eve, The Listener offered a unifying wish that “in spite of all the horrors”, readers would summon “that store of essential humaneness that lies at the very root of civilised life”. If Britons could not do this, then the Christmas message would “remain an aspiration unfulfilled”.

Tim Luckhurst has received funding from News UK and Ireland Ltd. He is a member of the Society of Editors and the Free Speech Union and a member of the Editorial Board of the Conversation UK. His book, Reporting the Second World War – The Press and the People 1939-1945 will be published by Bloomsbury Academic on 9th February 2023

2022-12-21
Previous Post: Three leadership qualities that Elon Musk’s replacement as Twitter’s CEO will need to have
Next Post: China faces 4.2 million Covid cases and 5,000 deaths a DAY in ‘thermonuclear’ surge as crematoriums burn 24 hours a day