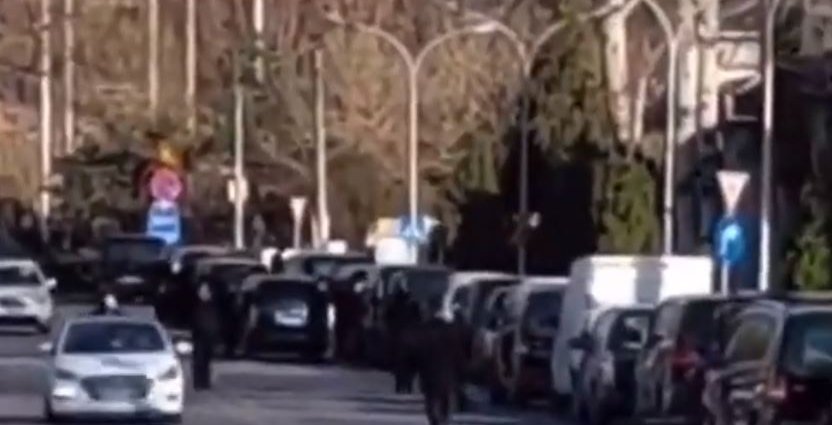 A LONG line of hearses has been seen outside a crematorium in China as the Covid death toll rockets.

Chilling video shoes the vehicles queueing at the Beijing crematorium, which is reportedly overwhelmed with a 20-day backlog as the “thermonuclear” outbreak ravages China.

A body being unloaded at another Beijing crematorium[/caption]

Queues of hearses have been seen elsewhere in the city[/caption]

It’s feared as many as 2.1 million Chinese could die[/caption]

But grim first hand evidence is emerging that the virus is beginning to take its toll after the Zero Covid policy of harsh lockdowns was ditched by China’s leader Xi Jinping.

According to one estimate, Covid could spread rapidly until there are 800 million cases in 90 days, with some experts predicting 2.1 million deaths in that time period.

The footage of the hearses was shared by epidemiologist Eric Feigl-Ding, who has said the situation was now “thermonuclear bad”.

“Staff at Beijing’s largest Babaoshan funeral house confirmed that all of its incinerators were working but were still unable to meet demand, resulting in a 20-day backlog,” he tweeted.

Dr Feigl-Ding is chief of the Covid Task Force at the New England Complex Systems Institute and one of the first scientists to warn about the ability of Covid to spread, when he worked at Harvard.

Meanwhile, another pictured shared by Sky News showed another long queue of hearses at Beijing’s Dongjiao crematorium this morning.

A man told Sky a friend’s 73-year-old mother died from Covid despite having no underlying conditions.

Across Beijing smoke was seen billowing into the air from crematoriums, many of which are now guarded by police, it reported.

Crematoriums working through the night in Wuhan were an early indication of devastation wrought by the pandemic back in 2020.

Video has emerged showing patients rammed into a hospital sleeping on floors and bodies stored in corridors, in a chilling echo of when Covid first hit China

Despite the official figures, even accounts in tightly controlled official media are now saying 50,000 people are reporting symptoms in one city, Guangzhou, alone.

In Beijing, the authorities have increased the number of so-called ‘fever clinics’ from 94 to 1,263 to cope with the surge in patients.

The R number, which indicates the transmissibility of the virus is currently a massive 16, scientists at the China National Health Commission estimate.

That means each person infected will spread the disease on to about 16 others.

Last winter, cases doubled in the US every three days or so.

Epidemiologist Ben Cowling, from the University of Hong Kong is warning that’s now happening in “hours” in China.

“Even if you manage to slow it down a bit, it’s still going to be doubling very, very quickly, he said.

“And so the hospitals are going to come under pressure possibly by the end of this month.”

The draconian Zero Covid policy saw the population forced to take continual tests for Coronavirus and millions put into lockdown, even if only a small number of people were testing positive.

Horror images showed those infected being dragged off to quarantine camps and even welded into their homes by brutal ‘Big White’ enforcers.

But a wave of protests following a fire in which the deaths of 10 people were blamed on the harsh lockdown led to Xi dramatically ditching ‘Zero Covid’.

2022-12-20
Previous Post: Why ambulance workers in England and Wales are going on strike
Next Post: Modern slavery: UK’s focus on ‘genuine’ victims has failed survivors since the 1800s