Why ambulance workers in England and Wales are going on strike 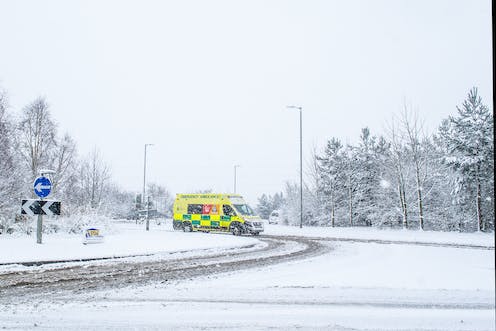 Emergency service workers are set to strike on December 21 2022, to demand better pay. The strike action is happening as the UK is witnessing the worst ambulance handover delays on record. Thousands of patients are having to wait outside A&Es up and down the country in the back of ambulances, as backlogs are cleared.

A parliamentary inquiry was launched in September 2022, amid media reports of “appalling waits” for ambulances – up to 40 hours long – and lives left at risk on a daily basis. Adrian Boyle, the head of the Royal College of Emergency Medicine, recently told BBC Radio 4’s Today programme that this is forcing ambulances to be “wards on wheels” and could cause excess deaths in England.

I have been studying the UK’s emergency and ambulance services for over 15 years. My research shows that they are facing unfair criticism for a situation which is not of their making. The workforce is in crisis, with system-wide pressures seriously hampering their ability to do their jobs.

Ambulance staff I have interviewed, describe their experience of the pandemic so far as “traumatic”, stressful, and a “test” of their “resilience”.

The sector is struggling with staffing shortages and retention and the highest sickness absence rates among all NHS organisations. Research points to deteriorating job satisfaction among its ranks, with staff increasingly suffering from burnout and stress.

When ambulances have to wait outside hospitals to hand patients over, it reduces their capacity to respond to other calls. Since 2013-14, the four-hour A&E waiting time standard has not been met, nationally, in England; since July 2015, it has been missed every month. These longer wait times in A&E are largely due to increased emergency admissions, staffing pressures and reduced bed capacity.

England has one of the lowest rates of hospital beds per person (just two per 1,000 people), among Organisation for Economic Co-operation and Development countries. Latest projections by the Health Foundation charity show that, in order to deliver 2018-19-levels of care, up to 39,000 extra hospital beds would be needed by 2030-31.

We know that one in five emergency admissions is avoidable. We also know that one in three patients across NHS England are staying in hospital for longer than they need. This has, in part, been attributed to the lack of social care provision in the community. However, fears of a “tripledemic” of high levels of flu, COVID and respiratory infections this winter could result into up to half of the available beds being occupied by patients – making an already grim situation even worse.

Since March 2022, NHS England targets stipulate that handovers from ambulance to A&E should take place within 60 minutes. Notwithstanding NHS plans for improvement, a quality indicator for measuring hospital performance in meeting those transfer-time targets has not yet materialised, despite parliamentary recommendations made more than a decade ago. The government’s own policy document has revealed that in the winter of 2021, 45% of ambulance handover delays took place in 15 hospital trusts.

Patients are increasingly being held in ambulances, either awaiting treatment or until a place is available in A&E wards. This raises serious concerns around patient safety and harm, concerns which the most recent data backs up.

According to the Association of Ambulance Chief Executives, in October 2022, almost 44,000 patients experienced potential harm as a result of long handover delays and nearly 5,000 of these, severe harm. Handovers exceeding three hours reached nearly 15,000 in October; those exceeding 10 hours also grew to reach a series high of 860. Month on month, wait times have increased by 28%.

These delays have a knock-on effect. They lead to emergency call handlers having to respond to distressed patients and families with updates on their wait times. They can also lead to thousands of additional
(duplicate) calls, thereby adding to the pressure on the system.

In my research, I have shown how unsuited the NHS ambulance model – which is largely predicated on rapid response, patient stabilisation and handover to hospitals – is to the new realities of increased demand, bed shortage and lack of social care capacity. It also does not take into account the higher clinical skill sets paramedics now boast.

Call volumes have grown exponentially from eight million 999 calls in 2010-11 to over 12 million in 2019-20.
The pandemic has increased mental health calls as well as unplanned primary care calls, due to people not being able to access a GP.

This system has given handlers more time to determine the best response to any given call. However, it remains predicated on targets and response times, rather than on clinical outcomes and quality of patient care. Also, it’s not working.

In October 2022, the average response time for a category-1 call was nine minutes 56 seconds – almost three minutes longer than the seven-minute target. Category-2 calls are taking up to two hours and 16 minutes, as compared with a target of 40 minutes. This continued focus by commissioners, regulators and providers on “meeting response times”, despite the weak correlation with clinician outcomes, is worrying.

Research shows how risk averse the NHS 111 system (including the 999 system) has become, resulting in improper triage. More ambulances are being deployed, with highly clinically skilled crews sent out to non-serious calls.

Paramedics are pleading for help and, as GMB national officer Rachel Harrison recently put it, “leaving in droves”. Unless bold system-wide reforms are implemented, emergency response services will continue to be frustrated in their efforts to save lives.

Paresh Wankhade is affiliated with Fire Service Research and Training Trust (FSRTT) as a Trustee.