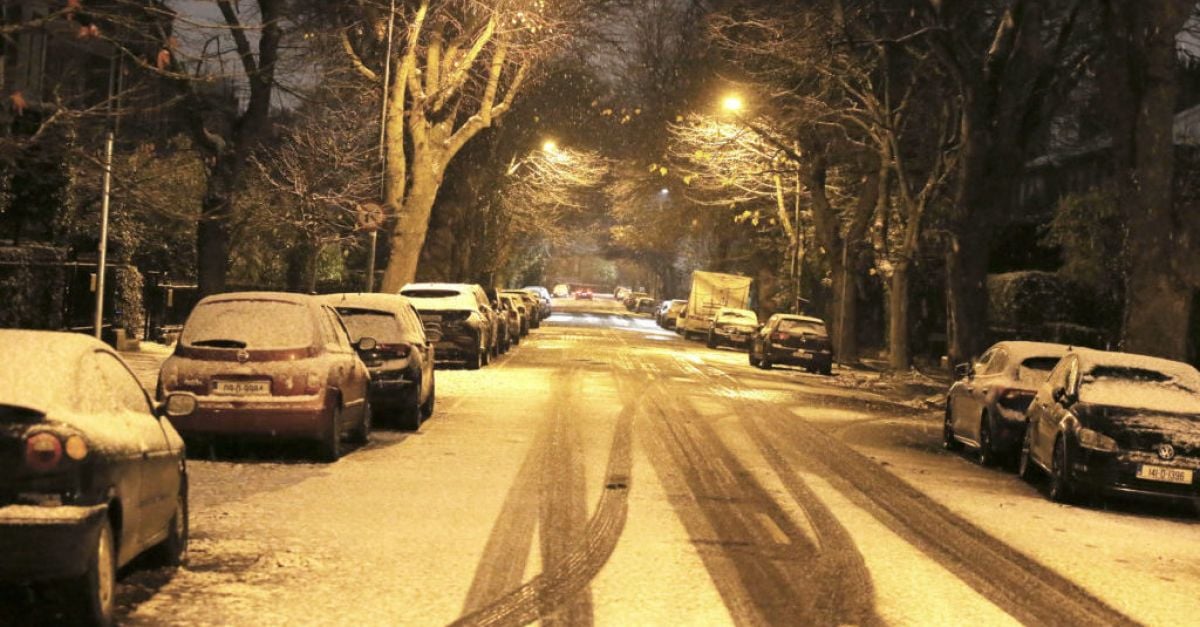 Ireland will see at least another week of arctic weather as Met Éireann extended a weather advisory and issued further warnings for hazardous conditions.

It comes after the first snow of winter began to fall across parts of the country late on Thursday evening, with social media users posting videos and photos of snow falling in counties Donegal, Meath, Kildare, Wicklow and across Dublin.

Temperatures dropped well below zero in much of the country overnight.

Met Éireann said it would remain very cold and dry nationwide through Friday.

The forecaster issued a warning for freezing fog on Friday afternoon, and a further nationwide warning for ice and fog overnight on Friday.

It said patches of freezing fog would cause potentially hazardous driving conditions, while a sharp frost and icy stretches will set in on Friday night as temperatures drop to minus 4 degrees.

A snow-ice warning for Co Donegal remains in place until 12pm on Saturday.

Met Éireann said the cold weather is likely to continue well into next week and has extended its winter weather advisory until Wednesday.

Very cold🥶 & dry for much of the country today with low winter sunshine☀️.

The Road Safety Authority warned that road users should be aware of the dangers caused by a drop in temperatures, and should watch out for black ice.

AA spokesperson Paddy Comyn urged motorists to exercise extreme caution on the roads. Even in parts of the country where there is no snow there could still be black ice, he told RTÉ’s Morning Ireland.

In the North, the UK Met Office has issued a status-yellow ice warning for counties Antrim, Down, Tyrone and Derry, which is in place until 12pm on Sunday.

Snow is forecast for the region on Friday night with temperatures set to drop as low as minus 4 degrees.

Warnings are in force so please stay #WeatherAware ⚠️

The Government has said an energy supply warning could be made in the next two weeks.

This is due to a drop in temperature causing an increase in demand for energy, while low wind levels are expected to lead to lower energy supplies.

Concerns have been raised in particular for the welfare of older people who live alone, and for those who are sleeping rough.

During Leaders’ Questions on Thursday, People Before Profit-Solidarity TD Mick Barry said the looming cold period, coupled with the energy crisis, posed a serious threat to elderly people and families.

“I’m receiving reports of elderly people in my constituency who are not turning on the heat in this cold snap,” the Cork North-Central TD said.

“They were very concerned that their €200 electricity credit will be used during this cold snap and that they will be left in a very tricky situation over Christmas.

“Cold snaps can make or break governments,” he said, expressing concern at the Dáil rising for a month over the crucial Christmas period.

Caution urged as temperatures in Ireland set to dr…

“But I can absolutely guarantee you that the Government will meet through the recess, at Christmas week and also first thing in the New Year.”

He added that the second energy credit of €200, which excludes VAT, would be paid “during that month” while the Dail is in recess. – Additional reporting: PA

2022-12-09
Previous Post: Harry & Meghan – what the first episodes reveal about Meghan’s reputation within the royal family
Next Post: Emotional labour: what it is – and why it falls to women in the workplace and at home