Emotional labour: what it is – and why it falls to women in the workplace and at home 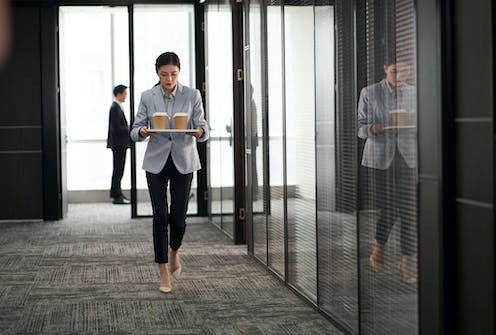 Have you ever been asked to make a cup of tea for your colleagues in the workplace? A recent survey commissioned by Samsung of around 2,000 employees in the UK showed that this is about three times more likely to happen to you if you are a woman.

Women are expected to do more non-work office tasks, such as organising staff away days and cards and gifts for colleagues, than men. Even if a woman says no to a task like this, it’s likely that another women will be asked in her place.

Women are fearful of being seen as difficult and more likely to agree to take on the invisible and unpaid labour that detracts from their other responsibilities. They may think, “If I don’t do it, another woman will.” And women have to hide their displeasure or discomfort and pretend to be accommodating even at the cost of their own mental health. This process of managing, modulating and suppressing one’s emotions to fulfil expectations from others or to achieve professional goals is called “emotional labour”.

American sociologist Arlie Hochschild first introduced the concept of emotional labour in 1983 to mean that emotions have a market and exchange value in our capitalist society. People are required to regulate their emotions to fit in with the emotional norm, and manage their emotions to ensure the smooth flow of business necessary to get a wage.

Emotional labour was never intended to be a gendered term. But invisible unpaid labour, like doing the office tea round, falls disproportionately on women – who then have to manage their emotional response to carrying out unwanted tasks.

As I discuss in my book Hysterical, this is is due to gendered stereotypes that women are more empathetic or nurturing. They lack the “status shield” – the social protection – that men have to act outside what is expected of their role. So women make the tea or organise the office Secret Santa, and pretend that they are happy to do so.

There actually seems to be little difference between men and women when it comes to the ability to empathise. However, there is a more significant difference between men’s and women’s motivation to show empathy. Women are more conscious of their social gender roles and the need to conform to them – perhaps in order to advance their careers.

What’s more, while there is pressure on everyone to maintain pleasantness and conform to emotional rules, people of colour feel this pressure much more than others and have to modulate their emotions much more in the workplace.

This is because their regulation of emotions in the workplace is also likely to include having to deal with racially motivated hostility and micro-aggressions – small, subtle instances of discrimination that the perpetrator may not even realise they are doing. The intersection of the pressure placed on them by both their gender and their race means that this emotional labour is magnified for women of colour.

In academia, Black and brown women may have to perform more emotional labour than men and white women. Research has found that Black women scholars are challenged by non-Black students who perceive them as less capable and competent and confer lower status on them.

Despite microaggressions like these, Black and brown women academics have to manage their anger and frustration to appear professional because any anger outburst will only reinforce the stereotype that they are not, in fact, capable and professional.

This work – constantly being on high alert to figure out the emotional norms in the workplace, making an effort to appear to be warm and likeable, and suppressing emotions in order to create comfort for others – all have a impact on the health and wellbeing of women and women of colour in particular.

While Hochschild does not extend the definition of emotional labour to the domestic domain, I do not agree. In the home, women often bear the responsibility for the everyday running of the house, childcare and all the niggly organisational tasks.

While taking on these roles, women also often internalise the message that they are expected to be nurturing, that this work of caring is their responsibility and shouldn’t seem so onerous – and that they should never complain, or get angry, tired and frustrated. And so they suppress any discontentment.

This emotional load is never higher than around the festive season. In heterosexual relationships, much of the burden of creating magic for everyone, especially the children, and making everyone feel comfortable and joyous seems to fall to women – even in the most gender-equitable households.

What can we do?

A significant part of the responsibility for changing this lies with men. They should reflect on their expectations of women around them in the workplace – and in the home. Men reading this should reflect: do you treat women differently to your male colleagues? Do you expect them to carry the burden of tasks that are often invisible and unpaid? If so, step up, address your internal biases and become an ally.

For women, it is important to learn to say no. It is true that taking a stand like this is another emotional burden for women to bear. But change has to start somewhere.

Or, another solution might be to just make a really bad cup of tea and not be asked ever again. But that is unlikely to change the systemic problems for everyone. More importantly, women of colour do not have the luxury – or the status shield – to fail.

Pragya Agarwal does not work for, consult, own shares in or receive funding from any company or organization that would benefit from this article, and has disclosed no relevant affiliations beyond their academic appointment.