TYSON FURY “looked into the soul” of Derek Chisora as the pair came face-to-face on Thursday.

The WBC heavyweight champion, 34, will take on Delboy for a third time at the Tottenham Hotspur Stadium on Saturday night.

Fury, still undefeated in 33 professional contests, won the first two clashes with Chisora in 2011 and 2014.

And he looked as confident as ever when locking eyes with his old foe once more.

Chisora, wearing sunglasses for the staredown, faced Fury for the best part of 25 seconds before turning away.

When Chisora then muttered that he didn’t care about a staring competition, Fury gave his opponent a chilling message. 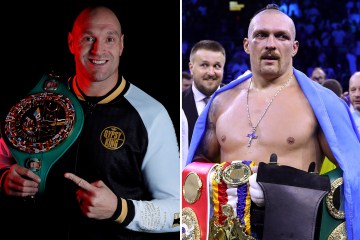 He said: “I do [want a staring competition]. Every time I stare them out. I look into their souls deep within them.”

Fury then proceeded to widen his eyes and fix his glare at the cameras as Chisora laughed off The Gypsy King’s antics.

In their first fight 11 years ago, Chisora lost a wide unanimous decision against Fury.

They then rematched in 2014 and Morecambe-born Fury was even more dominant, forcing Chisora to retire on his stall at the end of the 10th round.

Since then, Fury has gone on to beat the likes of Wladimir Klitschko, Deontay Wilder and Dillian Whyte – while also taking a three-year hiatus from the sport to battle depression.

But last time out he did clinch arguably the best victory of his career, edging Kubrat Pulev by split decision.

2022-12-01
Previous Post: Watch intense Tyson Fury stare down Derek Chisora ahead of trilogy fight as Gypsy King ‘looks into his soul’
Next Post: Standon Calling 2023: When is it, tickets, line-up, and headliners