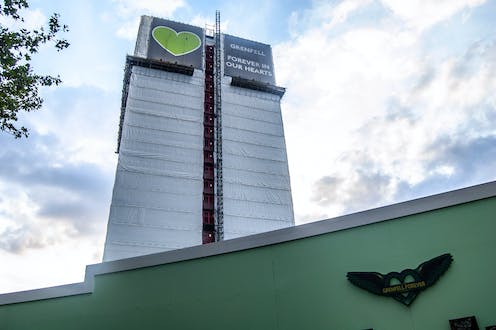 A senior coroner in Rochdale, a large town in England’s northwest, has ruled that two-year-old Awaab Ishak died as a direct result of prolonged exposure to mould, due to the repeated failure of his family’s landlord to repair the property in which they lived.

Both the Rochdale case and the fatal fire at Grenfell Tower in west London are characterised by the lack of accountability on the part of the housing provider and the landlord’s failure to listen to repeated warnings from the tenants affected. They have also seen allegations of racial bias and underhand tactics being used to dismiss tenants’ complaints.

Grenfell was the most catastrophic residential fire in the UK since the second world war. And when the public inquiry closed in November 2022, Richard Millett KC, counsel to the inquiry, concluded that “every one of the deaths was avoidable”.

In response to Rochdale, Secretary of State for Levelling Up, Housing and Communities Michael Gove has ordered all social housing providers in England to make an urgent assessment of damp and mould, and other problems.

Gove has asked that they list the number of civil penalty notices and successful prosecutions made. And he has pledged to cut funding to those social housing providers, including the Awaab family’s landlord Rochdale Boroughwide Housing (RBH), found to be failing their tenants.

The government defines a “decent home” as one which is reasonably warm, in a reasonable state of repair, has reasonably modern facilities and services and, crucially, which meets the statutory minimum standard for housing. Since 2006, the housing health and safety system rates any home containing what it terms a “category 1 hazard” – one that poses a significant safety risk – as non-decent.

According to the government’s 2020-2021 survey of housing stock in England, 16% of all homes (4 million dwellings) failed to meet the “decent homes” standard. In the private rented sector – which houses 4.4 million people – that number rose to 21%, while in the
social sector, it stood at 13%. A parliamentary report published in July 2022 found evidence that some social housing had “deteriorated to the point of being unfit for human habitation”.

Coroner Joanne Kearsley said that Awaab’s death should represent a “defining moment” for England’s housing sector. Surely, the defining, “never again” moment for housing was the Grenfell Tower disaster, in 2017. And yet, as I have shown, housing policy in the intervening five years has been characterised by paralysis.

The parallels between what has happened in Rochdale in 2020, and what happened in north Kensington at Grenfell three years earlier are distressing. On June 14 2017, 72 people were killed when a fire engulfed Grenfell Tower, where 85% of the victims were from minority ethnic backgrounds.

As my research shows, residents of the tower made multiple complaints, for years, about unsafe conditions. The degree to which these were not heeded echoes the experience of Awab’s family.

During the Grenfell inquiry, Alison Munroe KC, who represented victims, survivors and residents, underlined that racial discrimination and Islamophobia had played “a very real part” in the response to the tragedy. She pointed to a community impact assessment by Kensington and Chelsea police four days after the fire which incorrectly predicted outbreaks of crime and disorder, “especially when the majority of those affected are believed to be coming from a Muslim cultural background combined with the incident occurring during the holy month of Ramadan”.

In Rochdale, Awaab’s family have said the housing association’s response to their complaints about the state of the apartment was racist. The coroner noted that RBH had pursued a policy of refusing to tackle disrepair without an agreement from the claimants’ solicitors. She also highlighted that the association had claimed, without evidence, that the family’s lifestyle was at fault. The association has since admitted as much.

Some research has found that the planning process in England is reinforcing racial inequality. Planners and housing professionals can lack the confidence, skills and resources required to actively address racial inequality in housing.

Thousands of homes are in poor condition

Gove has admitted that “tens of thousands of homes are not in the state they should be”. He has pledged to “ensure tenants’ voices are heard”.

This is a crucial point, on which landlords continue to fail. Michael Mansfield KC, who represented the survivors and relatives at the Grenfell inquiry, has highlighted the limited scope of the inquiry – which aimed only to investigate how the fire came about and who should be accountable. To his mind, the exclusion conferred by being a social housing tenant was reflected in the very limited opportunities afforded to survivors to speak or to ask questions during proceedings. “One of the functions has to be that the people at the centre feel represented and that isn’t working,” he said.

Gove has the power to demand that social housing providers improve their performance. But the Conservative party does not have a good track record here. In 2014, then prime minister and Conservative David Cameron promised “a bonfire of regulations”, a policy which cut hundreds of standards for homes. And Grant Shapps, as Cameron’s Housing Minister in 2010, scrapped the Tenants Services Authority, the government agency charged with regulating registered social housing providers in England.

If social housing providers are responsible for the 13% of non-decent homes identified, housing conditions are considerably worse in the private rented sector, over which Gove has few powers. As a result of the acute shortage of council housing, one third of social housing tenants live in the private rented sector, where they pay much higher rents, subsidised by housing benefit.

The private rental sector has minimal regulation, often poor conditions and, according to a 2022 report from the UK housing charity Shelter, even lower standards than housing associations and local authority housing. That report noted that 12% of private rental properties have a category 1 hazard and 6% have damp. A YouGov poll, conducted by Shelter in May 2022, found that one in six private renters – equivalent to 2 million people – face dangerous conditions, including 42% living with mould and 11% with electrical hazards.

Gove has pledged £14 million to bolster inspections in the private rental sector. However, that Shelter report noted that, in the decade to 2019, government funding for local authorities to regulate the private rental sector – and ensure good housing standards for the 4.4 million households it comprises – has been cut by 44%. While the shift in rhetoric is welcome, Gove’s additional funds will therefore only go a small way to making up the existing shortfall brought about by previous Conservative governments.

Anna Minton does not work for, consult, own shares in or receive funding from any company or organisation that would benefit from this article, and has disclosed no relevant affiliations beyond their academic appointment.