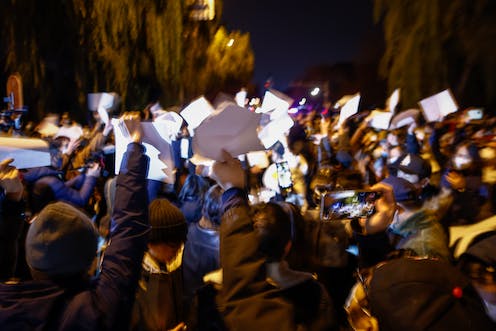 Protests have erupted across China, initially in response to the deaths of ten people in a fire in an apartment block in Xinjiang in the country’s northwest. The demonstrations represent the biggest expression of public unrest since the 1989 Tiananmen Square pro-democracy movement was savagely crushed.

The deaths have been blamed on China’s strict zero-COVID policy. The deceased were reportedly prevented from leaving the burning building and their deaths have sparked an outpouring of grief and anger.

Many of the demonstrations have been led by students. According to reports in the international media, by November 27 public protests of various sizes had been staged by students from at least 79 universities across 15 provinces of China.

Students have a range of grievances, high among them the zero-COVID policy. But, more broadly, many are protesting against the regime’s stifling of free speech and its heavy-handed political control. On one campus – Tsingshua University in Beijing – a video captured hundreds of students gathering to air their grievances.

One young woman made a speech saying:

If we dare not speak out because we are afraid of being arrested, I think our people will be disappointed with us. As a student of Tsinghua University, I will regret it for the rest of my life!

In the background, large numbers of students chanted the slogan: “Democracy, rule of law and freedom of speech.”

The protests have been dubbed the “A4 revolution” or “blank paper revolution”, after the students’ expression of their anger and discontent by holding up blank sheets of A4 paper, symbolising both the silencing of protest and defiance and rejection of state censorship and control.

The trouble with students

Since the 1989 student-led pro-democracy movement was crushed in the massacre at Tiananmen Square in Beijing, campus protests have been rare in China. This has drawn criticism from China expert Elizabeth Perry of Harvard University who has accused China’s academy for what she terms its “educated acquiescence”.

In a 2020 paper, How Academia Sustains Authoritarianism in China, Perry criticises students and academics alike for “acceding to political compliance in exchange for the many benefits conferred upon it by the state”. By doing this, Perry argues, academia has buttressed the authoritarian rule of the regime in China.

But, in recent times – and even before the fire in Xinjiang – discontent has been discernible on China’s university campuses. The growing anger at the prolonged zero-COVID lockdowns has added to an undercurrent of unrest at deteriorating economic conditions which have led to growing unemployment and a waning belief among young people in Xi Jinping’s nationalistic “China Dream”.

China has enforced lockdowns in different parts of the country almost continuously for three years. The chaotic and harsh control measures across the country have caused huge disruption to everyday lives, not only the loss of freedom of movement but also food shortages and various forms of psychological harm.

As on many western campuses, but on a much greater scale, students’ lives have been severely disrupted and there is widespread disillusionment. One tactic of demonstrators which has caught international media attention is the bizarre ritual that has become known as “collective crawling”.

Footage of students forming a circle and crawling around on their hands and knees has flooded social media. The ritual is designed to express frustration at the boredom of endless lockdown conditions, said to represent the attempt to use “meaninglessness to resist meaninglessness”.

Students’ frustration over the gloomy economic outlook and associated grim job prospects is significant. The Chinese government’s legitimacy centres on its economic performance and the 40 years of rapid economic growth delivered by the Communist party.

COVID has changed the course of China’s economic trajectory and, unsurprisingly, the employment market has suffered. In July 2022, the youth jobless rate hit a record 19.9%. And, with 11.58 million students due to graduate into the job market next year, these students’ prospects are not looking bright.

It’s a measure of how deeply this disenchantment is felt among young people that many are accusing the government of censoring coverage of the World Cup in Qatar because crowds there are not wearing masks.

The lockdowns and grim economic prospects are undermining young people’s confidence in Xi’s much-hyped nationalistic vision. We are now seeing even some formerly solid supporters of the administration openly questioning and criticising the zero-COVID policies on the Chinese social media platform Weibo And some of the more daring young people protesting in China are voicing the unprecedented demand that “Xi Jinping step down”.

China’s unachievable zero-COVID policy is being hung around Xi’s neck. The Chinese leader has achieved a cult of personality and control not seen since the days of Mao Zedong and he was recently awarded an unprecedented third term as leader at the 20th party congress in October, essentially making him “ruler for life”. But what looks like a political miscalculation over the zero-COVID policy, which has no end in sight as infection numbers continue to rise to record levels, has brought him the most challenging test yet.


Students have now been sent home from their universities. And the security services are working overtime to stifle dissent on the streets and in cyberspace. But Xi’s reputation is now tarnished, perhaps irrevocably. And it’s hard to see these grievances on campuses and beyond simply disappearing quietly.

Tao Zhang does not work for, consult, own shares in or receive funding from any company or organisation that would benefit from this article, and has disclosed no relevant affiliations beyond their academic appointment.