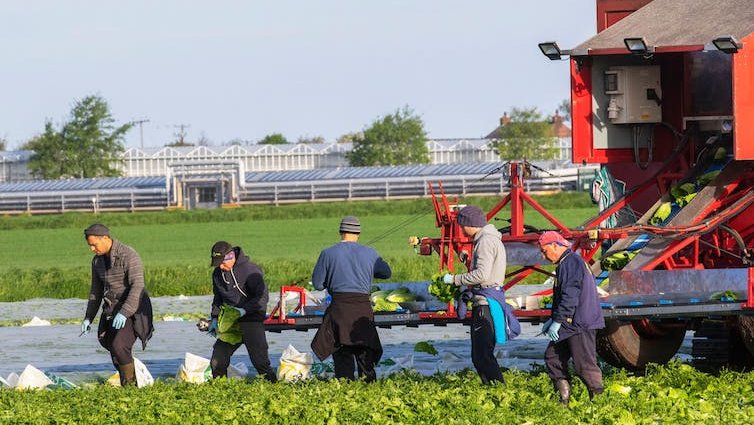 Keir Starmer has given a glimpse of what immigration policy could look like under a Labour government. Speaking to the Confederation for British Industry, the party leader’s key message was about reducing the UK’s dependency on migrant labour.

Former Ukip leader Nigel Farage, known for his headline-making commentary, has claimed that Labour is now to the right of Conservatives on immigration. In terms of broad rhetoric, Starmer and the current government aren’t dissimilar on the basic point of ending what they call Britain’s dependence on migrant labour.

This is also something former Labour party leader Jeremy Corbyn implicitly put forward in his 2019 party manifesto by vowing to ban overseas-only recruitment practices and regulate the labour market including “stopping the undercutting of wages”.

Post-Brexit, businesses have urged government to be “practical” on immigration. This plea has largely fallen on deaf ears. UK prime minister Rishi Sunak told the CBI his focus is on “tackling illegal immigration”, and the government’s most recent immigration plan is almost exclusively focused on asylum. The home secretary, recently under fire for harsh rhetoric on refugees, has said she’s obsessed – but not with making it easier for businesses to hire from abroad.

Starmer acknowledged the need for skilled workers from abroad, saying: “We can’t have a situation, as we did with HGV drivers, where temporary shortages threaten to cripple entire sectors of our economy.”

But he makes it clear that any changes to the current immigration system would come with a price for business – clear plans to boost skills and more training, for better pay and conditions and for investment in new technology.

The desire to reduce immigration dependency and give domestic workers more skills is shared by politicians of every stripe, though it’s harder for the Conservative party, so long the party of business, to pursue a strategy that displeases industry so explicitly.
Sunak’s immigration minister, Robert Jenrick, says he wants to see employers putting British workers first, reminiscent of Gordon Brown’s infamous “British jobs for British workers” pledge. But there’s no policy substance behind this platitude.

New Labour was particularly keen to facilitate and encourage migrant workers under their managed migration policy. Some factions of the Conservative government, including the recent prime minister, Liz Truss, are too.

Read more:
How New Labour made Britain into a migration state


Migration and the economy

Starmer’s underlying message is about transforming the UK’s political economy from a liberal labour market towards a more coordinated one. Liberal labour markets have low employment protection, light regulations and a large low-wage sector. A key element of this is flexibility, of which migrant labour offers plenty.

Before Brexit, the UK managed to have a very restrictive immigration policy, precisely because EU nationals filled the labour market gaps. However, due to Brexit and now the pandemic, this surplus of flexible labour has dissipated.

Starmer is correct that the UK is structurally dependent on immigrant labour, but this is a product of the government’s (and employers’) own making. Low-paid sectors such as agriculture, manufacturing and hospitality rely on migrant labour, particularly from central and eastern Europe due to the low pay and poor working conditions offered.

The health and social care sectors are a good example of how the government and employers have created dependence on migrant labour. Chronic under-investment in the sector has kept wages low, working conditions poor, and led to major labour shortages.

Apprenticeship schemes have also declined, and recent governments have been reluctant to invest in training and vocational education to move to a more coordinated market economy, where education and training of Britons parallel labour market needs.

Instead, recent governments have relied on points-based immigration systems (PBS) as a panacea for immigration woes. This isn’t just a Conservative issue – New Labour introduced the UK’s first PBS in 2008, though David Cameron’s Conservative-led government dismantled it.

Former prime minister Boris Johnson brought in another system in 2020 but it is a points-based system in name only. In reality it is a series of mandatory requirements with a bit more flex than previously.

The high salary threshold of £25,600 is lower than it was (£30,000), but still nowhere near the salary of many low-paid workers. The excessive red tape of the current post-Brexit system has caused further problems with hiring foreign labour, particularly for small businesses.

An olive branch to unions

One aspect of the speech marked a fairly bold shift in tone and direction from the last Labour government. Starmer made clear that trade unions will be part of the conversation with employers about how to reduce dependency on migrant labour. During the New Labour years, neither Tony Blair nor Gordon Brown saw any real role for trade unions in immigration policy.

It is unclear how this will work – trade unions may be part of the conversation on deciding where businesses should invest in training, or in how to improve working conditions and career progression for workers.

In some respects, Starmer is taking Labour back to its protectionist, trade union roots. Since Labour left office in 2010, the party has been soul searching, struggling to resolve the key tension between protecting working-class workers and credibly appealing to competitive, global business. Trying to configure a party that speaks to two diametrically opposing but essential constituencies is a tough gig.

Starmer is not popular with the Corbyn-backing side of Labour, nor the Brexit-voting faction, who have a distaste for Starmer’s remainer credentials. Starmer’s message might appeal to these factions, who want to see more regulation of the labour market and in turn, greater employment rights for citizens.

Trade unions will be pleased to have a privileged seat in policymaking –- an important group to appease as the country faces mass industrial disputes across sectors. Starmer has been at odds with unions after advising frontbenchers not to join picket lines. This is an olive branch at a key moment.

Erica Consterdine does not work for, consult, own shares in or receive funding from any company or organisation that would benefit from this article, and has disclosed no relevant affiliations beyond their academic appointment.