We were told to ‘stay home’ to stop COVID. Then our homes became disease hotspots 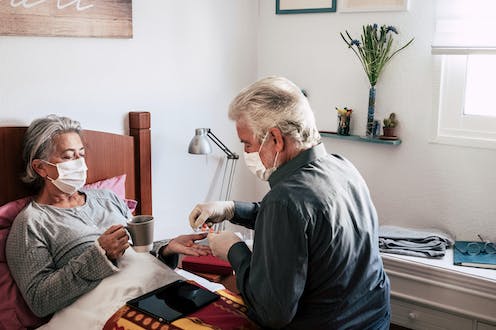 The rapid rise in COVID cases and deaths in March 2020 led Boris Johnson, then prime minister, to tell the British people: “You must stay at home.”

These comments marked the beginning of the first nationwide COVID lockdown, and aligned with similar pronouncements and policies being introduced around the world. Indeed, until vaccines became available, the main policy used to control COVID was for billions of people to stay home.

Even when lockdowns were lifted, home remained a place for infectious people to isolate, and for vulnerable people to shield.

While staying home protected many of us from catching COVID at work, at school, at the shops or while out with friends, it necessarily increased our risk at home. Yet the risk of infection at home wasn’t researched, advised on, legislated about, policed or managed as much as risk at work, school or in public places.

The fact that the home would be a hot spot for COVID spread was clear to experts and policymakers early on. Research has since concluded that “households appear to be the highest risk setting for COVID-19 transmission”.

The public seemed to agree. According to one preprint (a study yet to be peer-reviewed), the most common place people infected in England and Wales in 2020 and early 2021 said it had happened was at home.

Numerous studies have shown that if one member of a household becomes infected, a significant minority of other members will generally follow. For example, a review of 87 studies in 30 countries found that on average, 19% of other household members became infected. Data specific to the UK showed higher rates of household spread.

Based on this data, and taking into account the fact that some people live alone and some live with several others, I estimated in my new book that from the start of the pandemic until January 2022, 26%–39% of all COVID infections in the UK among people living in private households were contracted at home. I calculated that these infections led to somewhere between 38,000 and 58,000 deaths.

Read more:
Who gets to decide when the pandemic is over?

Dramatic laws were introduced and many billions of pounds were spent on controlling COVID infections outside the home and mitigating the effects of these measures. For example, 11.7 million UK employees were furloughed and supported to stay home at a cost of £70 billion.

However, neither the UK government nor the governments of the nations within it developed significant policy on preventing infection at home, or spent much money on it.

As a result, almost all the burden of preventing infections at home fell to households themselves. Testimonies collected by a series of British cohort studies show that people were aware of the risks. They segregated themselves from loved ones within the home. They moved between homes to separate high-risk and vulnerable household members. They gave up work. They cleaned and cleaned.

However, not everyone had the same resources to manage risk. The UK government’s Scientific Advisory Group for Emergencies (Sage) noted the ability to mitigate risk may be affected by “the physical nature of the home and surroundings”, including house type, number of rooms, ventilation and outside space. Crowded housing with limited facilities would make things more difficult, and Sage said support may be needed for people to ensure their homes were as safe as possible.

Public health advice also highlighted that risk mitigation might not be possible where there were young children, people with learning disabilities or serious mental illness or where an infected or vulnerable person needed or gave care.

The World Health Organization and the UK government advised that infected people should have their own bedroom. UK advice recommended a separate bathroom too where possible. But of course, this wasn’t possible for everyone.

In contrast, of the richest fifth, only 8% had someone shielding and 31% had someone who needed to isolate, but 82% had somewhere for them to sleep alone and 58% had a spare bathroom.

The UK housing system fitted the “inverse care law”, by which people with the most health need have the least help or resources to deal with it.

Lockdowns were essential to stem COVID spread. However, staying home could have been made safer and more effective. Sage noted that while in-home transmission was very common, it wasn’t inevitable.

Sage and Public Health England advice contained a number of recommendations to government to reduce infection risk on the home front. These included offering temporary alternative accommodation to allow for safe shielding and isolation for members of high-risk households.

Another was to provide more advice and practical support, especially for people in shared and overcrowded housing, on safer use of common spaces, as well as management of shielding and isolation.

Read more:
COVID: why working from home leaves the lowest paid at more risk of infection


Finally, Sage called on the government to reduce deprivation and improve housing quality and affordability.

Unfortunately, these ideas remained largely on paper. But more action on infection at home may well have saved thousands of lives and reduced inequalities. This must be front of mind should we face another pandemic in the future.

Becky Tunstall does not work for, consult, own shares in or receive funding from any company or organisation that would benefit from this article, and has disclosed no relevant affiliations beyond their academic appointment.

2022-11-24
Previous Post: Artemis: why it may be the last mission for Nasa astronauts
Next Post: Fans say same thing as Suarez is hauled off in Uruguay’s clash with South Korea