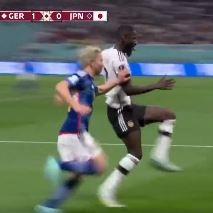 The Real Madrid star was in action for his country as they kicked off their 2022 World Cup campaign in Qatar.

And it was an incident in the 64th minute that really got people talking.

Trailing 1-0, Japan desperately sought to get back in the game.

Manager Hajime Moriyasu threw on former Arsenal forward Takuma Asano in the second half as he chased an equaliser.

Asano chased a long hopeful ball down the channel, but was marshalled by Rudiger.

Rather than conventionally shepherding the ball out of play, however, Rudiger bizarrely jumped into his run as he galloped towards the touchline.

The former Chelsea ace grinned as he ran back into position, with fans noticing his strange run.

One wrote: “Wtf is rudiger doing.”

While a second tweeted: “Rudiger has got to be one of the weirdest players I’ve ever seen.”

A third asked: “What is blud doing?”

Another added: “Look at the way Rudiger runs how can you hate this guy.”

Japan DID equalise shortly after, with Ritsu Doan grabbing a deserved leveller just 15 minutes from time.

And they went in front in stunning fashion moments later, Asano somehow squeezing a brilliant shot beyond Manuel Neuer.

2022-11-23
Previous Post: Voter suppression: how democracies around the world are using new rules to make it harder to vote
Next Post: Fans all say same thing after Antonio Rudiger’s hilarious running vs Japan