Ukraine war: Serbia is shifting closer to Russia – here’s why 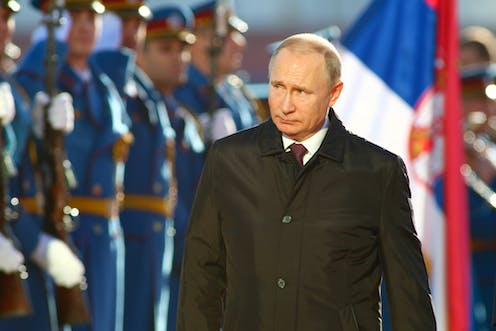 Putin is the world leader that Serbs admire the most and 95% of Serbs see Russia as a true ally, compared to only 11% who see the EU that way, despite the EU being Serbia’s major financial supporter, according to a recent poll.

And 68% of Serbs said in the same poll that they believed Nato, not Vladimir Putin, had started the war in Ukraine, with 82% against the sanctions imposed on Russia.

While much of Europe is backing Ukraine in the current war, Serbia is taking a very different position. In Serbia, the government and the public both display high levels of support for Putin and Russia.

For example, Serbia has not imposed sanctions on Russia or distanced itself from Putin.

Instead, Serbia has signed an agreement with Russia to “consult” each other on foreign policy issues. Putin and the Serb president Aleksandar Vučić also have signed a new gas agreement, and the state-controlled Air Serbia airline has doubled its flights from Belgrade to Moscow.

All this runs counter to the EU’s foreign policy decision to sever some of its ties with Putin over Ukraine. Serbia, as an EU candidate state, is expected to do the same.

After Putin invaded Ukraine, he had strong support in Serbia, where multiple rallies were held in his honour. Graffiti on walls in Belgrade, Serbia’s capital, also included the “Z” symbol, which has come to represent public support for Russia’s invasion of Ukraine.

Since the war in Ukraine began, a mural depicting Putin with the flags of Russia and Serbia and the word “brother” were seen in Belgrade. Billboards featuring a picture of Putin and the words “happy birthday to President Putin from Serb brothers” with the letter Z printed much larger than the others were put up to mark Putin’s 70th birthday.


Serbia and Russia have a long history of close ties due to their shared Slavic and Orthodox heritage. The Serbian language is also closely connected to Russian.

Since sanctions on Russia were put in place following Putin’s attack on Ukraine, Serbia has emerged as the top location for Russian businesses and highly qualified individuals, particularly in the tech industry, to relocate to in order to escape sanctions.

The most recent political alliance between Serbia and Russia is founded on a deep sense of resentment toward Nato for its role in the establishment of new republics that were a part of the Soviet Union and Yugoslavia, namely Kosovo and Ukraine. Putin and Vučić argue that Serbia and Russia have been wrongly portrayed as aggressors when they are only trying to protect their ethnic brothers.

The main driving force behind the recent increase in support for Putin is Serbia’s hopes that a Putin victory in Ukraine will somehow enable them to regain control of parts of Kosovo and other parts of the Balkans. Recently, Vučić has gone so far as to suggest that Serbia might interfere in Kosovo to defend its Serbian minority.

His threats were made in part as a result of pressure that Putin applied on Vučić to threaten an armed incursion into Kosovo and to destabilise the Balkans and draw attention away from Russia’s war in Ukraine. But neither Putin’s actual influence in the Balkans nor Serbia’s facilitation of Russia’s geopolitical goals in the region are being taken seriously by the EU.

Since Vučić came to power ten years ago, Serbia has maintained a facade of neutrality between Russia and the EU. He has done a good job of playing the two sides against one another to increase Serbia’s bargaining power on issues like energy, security, EU membership, and prolong the recognition of Kosovo by five EU member states. Meanwhile, Serbia’s adherence to EU foreign policy has significantly decreased from 64% in 2020 to 45% in 2022.

This strategy has been successful for the interests of Serbia, which is the primary recipient of EU funding in the Balkans and is considered a frontrunner to join the EU by 2025.

The main source of Putin’s influence in the Balkans is Serbia, and as part of cementing that Vučić has welcomed a Russian military installation into Serbia. According to Nato, the facility acts as a hub for Russian espionage operations.

Putin uses the Balkans, particularly Serbia and Bosnia and Herzegovina, as a bargaining chip in his dealings with Nato and the EU. He has even sought to use Nato intervention in former Yugoslavia in 1990s to support his attack on Ukraine.

Putin has also been effective in endorsing or backing political candidates and parties that can enhance its reputation and weaken the influence of Nato and the EU across the Balkans. The conservative Democratic party of Albania received close to US$500,000 (£443,000) during the 2017 parliamentary elections, according to a recent declassified US intelligence report. Some lawmakers in Montenegro, North Macedonia, and Bosnia and Herzegovina also received funding from Russia.

The rest of Europe has not fully recognised Russia’s influence in the Balkans and Serbia’s role in advancing Putin’s geopolitical objectives. Some members of the European Parliament have suggested that the EU needs to reevaluate Serbia’s membership.

The EU states, in particular Germany and France, are still divided over Putin’s considerable influence in the Balkans, and have only expressed their “disappointment” with Vučić’s decisions.

Putin’s influence in the Balkans shouldn’t be ignored and since Serbia has made it obvious that it wants to deepen its ties with Russia, the EU shouldn’t be duped by the facade of neutrality that Vučić’s has skilfully maintained over the years.

If the EU cautions Serbia that a EU candidate state’s relations with Russia cannot be “business as usual” then it may have to rethink its pro-Russia policy.

Andi Hoxhaj does not work for, consult, own shares in or receive funding from any company or organisation that would benefit from this article, and has disclosed no relevant affiliations beyond their academic appointment.