LUKAS PODOLSKI rolled back the years by scoring an outrageous goal in the Polish top flight yesterday.

The former Arsenal winger now plies his trade in the country of his birth for Gornik Zabrze.

Podolski, 37, stole the show during yesterday’s clash with Pogon Szczecin.

With his side 3-1 up with around 18 minutes remaining, the German 2014 World Cup winner picked up the ball inside his own half.

Moments later, with little hesitation, Podolski launched an improbable effort towards goal with his rocket of a left foot.

The ball subsequently cannoned through the air, dipping violently and catching the goalkeeper backpedalling. 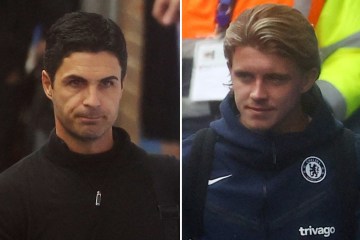 There was nothing the stopper could do, however, as the ball sailed perfectly over his head and in.

Podolski’s team-mates appeared dumbstruck by the sensational effort, either lifting their hands to their heads or running over to congratulate their highly-decorated pal.

Gornik won the match 4-1, taking them up to tenth in the table.

Podolski left Arsenal in 2015 and has been something of a globetrotter in the years since.

After a loan spell at Inter Milan he signed for Galatasaray in Turkey.

He netted 34 goals and laid on a further 18 during 75 appearances for the Turkish giants – helping them win the domestic cup in 2016.

Podolski subsequently signed for Japanese side Vissel Kobe in 2017, where he would play for three years.

He starred alongside the likes of Andres Iniesta and David Villa in Japan – as well as old Arsenal pal Thomas Vermaelen and future Celtic favourite Kyogo Furuhashi.

The talented group won the Emperor’s Cup in 2019, before Podolski was on the move again the following year.

A season back in Turkey with Antalyaspor followed, before he signed for current side Gornik.

He has enjoyed unusual success off the pitch too, opening a string of kebab shops around Germany.

While he also owns an ice-cream parlour, a pub and a clothes shop.

2022-11-06
Previous Post: Richard E Grant discusses facing the loss of his wife on Desert Island Discs
Next Post: Glastonbury tickets take more than an hour to sell out after technical problems