In China, a debate over sanitary pads on trains reflects long-held beliefs about women and menstruation 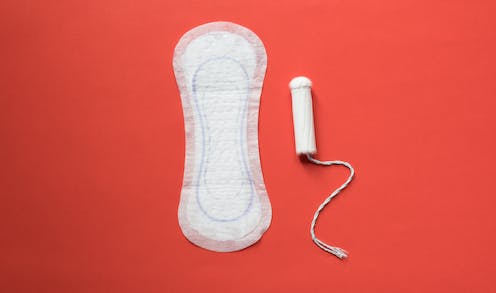 Discrimination against and repression of women is a global problem. In authoritarian states, it is also intertwined with regime survival. Take recent events in Iran, where women-led protests against strict hijab laws are challenging the country’s ruling powers. Nearly 3,000 miles away in China, a different feminist debate is taking hold, over whether sanitary pads should be sold on high-speed trains.

This debate was kindled on September 16 2022 on the Chinese social media site Weibo. A woman posted about her irritation at not being able to purchase period products while travelling on the country’s high-speed rail network: “I don’t want more women to feel embarrassed, so I’m bringing this up in the hope that it may be addressed”.

China Railway responded that feminine pads were private items that women should prepare for themselves in advance. Some commenters agreed that it was “inappropriate” and “dirty” to sell sanitary pads on trains. “Only food is served on train. You don’t want sanitary pads sold alongside food, do you?” one wrote. Comments revealed an ignorance among men about menstruation, notably evidenced by the question “why can’t women just hold it in?”

In China, menstruation taboo has roots in a traditional culture that associates the physiological phenomenon with bad luck and uncleanness. Women are excluded during their menstruation from entering public realms such as temples, ceremonies and ancestral halls. Even today, menstruating women are still not allowed to honour the dead in some rural areas.

Some accused women of demanding privileges and extra rights by asking for period products to be sold. “Women need feminine pads, so they require that high-speed trains MUST sell those products. It is a hegemonic logic”, said a male Chinese social media user with 889,000 followers. Opponents of selling feminine pads on high-speed trains call this demand “pseudo” feminism and dismiss it as taking advantage of feminist movements.

In China, the post-2000 growth of consumer culture and the internet has converged with an influx of post-feminist ideas from the west. In such an environment, female digital influencers often use feminist ideals to attract followers on social media. In what’s been critiqued as “pseudo-feminism”, some influencers have been known to
encourage their female followers to use their “gender strengths”, such as delicate or fragile beauty, biological vulnerabilities, and sexual attractions, to “tame” men in both romantic relationships and workplaces.

This particular brand of feminism, while seeking to help women achieve “happiness” and “success”, reinforces traditional gender roles at the expense of women’s wellbeing and social needs. While this criticism is justified in some cases, some opponents have used the label “pseudofeminism” to stigmatise entire feminist movements. In this debate, some opponents consider proponents to be “pseudo-feminists”. They argue that truly independent women should be responsible for preparing feminine pads in advance for themselves, rather than taking advantage of their biological vulnerabilities to force companies to provide products specially for them, just as they use “female gender strengths” to “tame” men in relationships.

There is a similar dynamic in the disconnect between the positive and negative perceptions of menstruation that persist in China. Menstrual blood is not only considered dirty but also polluting, posing a danger to those come into contact with it. This is the basis for the argument that sanitary pads should not be sold alongside food.

At the same time, the celebration of menstruation as a symbol of female fertility reduces women to their reproductive function. “Menstruation is the basis of fertility. For thousands of years, human life and civilisation were born from menstruation”, said one social media user defending the sale of sanitary pads on trains. The former reflects the misogyny of Chinese society, while the latter panders to the regime’s policy of incentivising women to have more children to address the current population crisis. While the debate over sanitary pads may appear trivial, it reflects a much wider structural system that hurts mothers and all women.

On October 3 2022, a social media user happily posted that she was able to find sanitary pads being sold on another high-speed train. While it’s not clear if there was a change in policy or simply a positive decision by a different train line, the discussion and responses from influential social media users shows that gender equality and changing menstruation stigma has a long way to go in China.

Chi Zhang receives funding from British Academy. This research is conducted together with Ming Zhang of the UK-China Media and Cultural Studies Association, who made important contributions to this piece.