Ukraine war: Belarus is not yet committed to a closer military partnership with Russia – here’s why 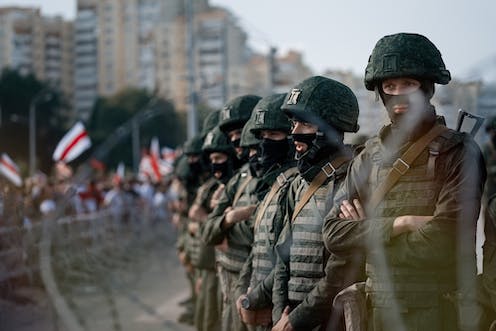 Belarus could be edging closer towards more active participation in Russia’s war in Ukraine.

Belarusian president Alexander Lukashenko recently announced that troops from Belarus and Russia would form a new joint regional grouping near the border between Belarus and Ukraine. Lukashenko claimed this step was justified to defend Belarus from attack by Ukraine.

He claimed Kyiv was being encouraged to do this by Ukraine’s supporters in the west. It follows military exercises held in September conducted by Belarusian forces near its border with Poland.

Video recordings of military equipment being moved by rail towards southern Belarus circulated on social media during the week of October 17. Some analysts suggested that Moscow was putting pressure on Minsk to play an active role in a new Russian offensive in northern Ukraine that could target the capital city of Kyiv.

But there are some signs that Lukashenko is still weighing up the decision.

While the benefits to Vladimir Putin of having Belarus more directly involved in the war in Ukraine are clear, Lukashenko’s interest in joining Russia in a war against Ukraine – a determined and resourceful opponent with powerful backers in the west – is less obvious. To understand the choices facing Lukashenko, and what he might do next, we need to consider the dynamics of domestic politics in Belarus.

Although Lukashenko is an authoritarian ruler who managed to overcome a serious challenge to his rule in the shape of mass popular protests during and after the August 2020 presidential election, the price of defeating that challenge has been greater dependence on Moscow.

Lukashenko was first elected president in 1994 and has used a combination of economic stability, a robust system of political patronage and a well-funded and loyal security service to maintain his position. Although he had made Belarus into the most loyal of Russia’s allies, by the mid-2010s he was increasingly dissatisfied with the economic benefits of that relationship, as Russian subsidies to Belarus became less generous. Lukashenko’s domination of domestic politics meant that he was able to carve out space for greater independence from Moscow by making overtures to the west.

By the summer of 2020, Lukashenko’s position was far less secure. His disastrous handling of the COVID-19 pandemic and the emergence of a more united opposition sparked the “campaign of fighting women” where Svetlana Tikhanovskaya, Maria Kolesnikova and Veronika Tsepkalo led a grassroots movement that brought hundreds of thousands of Belarusians on to the streets.

Lukashenko had to fight for his political life using harsh crackdowns by the security service, and imprisoning activists such as Nobel prizewinner Ales Bialiatski and journalist Andrei Aliaksandrau. But in a clear sign that he was not confident about his own ability to restore order, Lukashenko sought and received assurances from Putin that Russia was ready to provide assistance in the form of military or police forces.

After a recent meeting with Putin in St Petersburg, Lukashenko complained to his senior officials that Poland, Ukraine and Nato were trying to drag Belarus into a fight. This statement does not reflect much enthusiasm at the prospect.

Even more interesting were Lukashenko’s statements in September 2022 suggesting that some Belarusians who had been arrested and convicted of political crimes might be given amnesty. Drawing a distinction between hardened criminals and those accused of minor crimes such as protest, Lukashenko held out the prospect of some, albeit limited, reconciliation between the regime and society.

Also in September, the Belarus foreign minister Vladimir Makei held private meetings with western diplomats during the UN general assembly session, reportedly raising the possibility of better relations between Belarus and the west.

Getting the involvement of another state’s military forces on Moscow’s side would be a symbolic victory for Putin. It would also put greater pressure on Ukraine’s forces while they are focused on retaking territory occupied by Russia, particularly in the four regions recently annexed by Russia – Donetsk, Luhansk, Kherson and Zaporizhzhia – and now under martial law.

The cooperation of the regime in Belarus has been vital for Russia’s war effort in Ukraine since the beginning.


During the build-up of massed Russian forces during the weeks preceding the February 2022 invasion of Ukraine, Belarus provided the staging ground for Russian troops and equipment. This included tolerating the poorly provisioned Russian soldiers raiding local farms and communities for food and supplies.

Putin’s initial attempt at a swift, decapitating attack on the Ukrainian government would have been impossible without the ability to pour Russian troops over the border between Belarus and Ukraine, only 145 miles from Kyiv. When that strategy failed, Belarus provided a safe haven for retreating Russian forces. Since then, Russia has used Belarus as a base for launching air raids and missile strikes on targets throughout northern and western Ukraine.

But for Lukashenko, agreeing to deploy Belarusian soldiers would be a huge step. Unlike the security services, the Belarusian armed forces are staffed through conscription and are likely to reflect the views of civilian society. Independent surveys of public opinion in Belarus show less than 10% of Belarusians support sending their own soldiers to fight.

Making Belarus a combatant could spark mass protests that would bring turmoil into a domestic political environment that Lukashenko seems keen to keep calm. It is also possible that Belarusian soldiers would surrender or even switch sides at the earliest opportunity.

These recent moves suggest that Lukashenko may still be seeking to build relationships, both at home and abroad, that leave him less dependent on Moscow, and that would definitely rule out deploying troops to Ukraine.

Jennifer Mathers does not work for, consult, own shares in or receive funding from any company or organisation that would benefit from this article, and has disclosed no relevant affiliations beyond their academic appointment.

2022-10-23
Previous Post: AI could help predict suicides – but rushing the technology could lead to big mistakes
Next Post: Drake and 21 Savage reveal release date of new collaboration album Her Loss