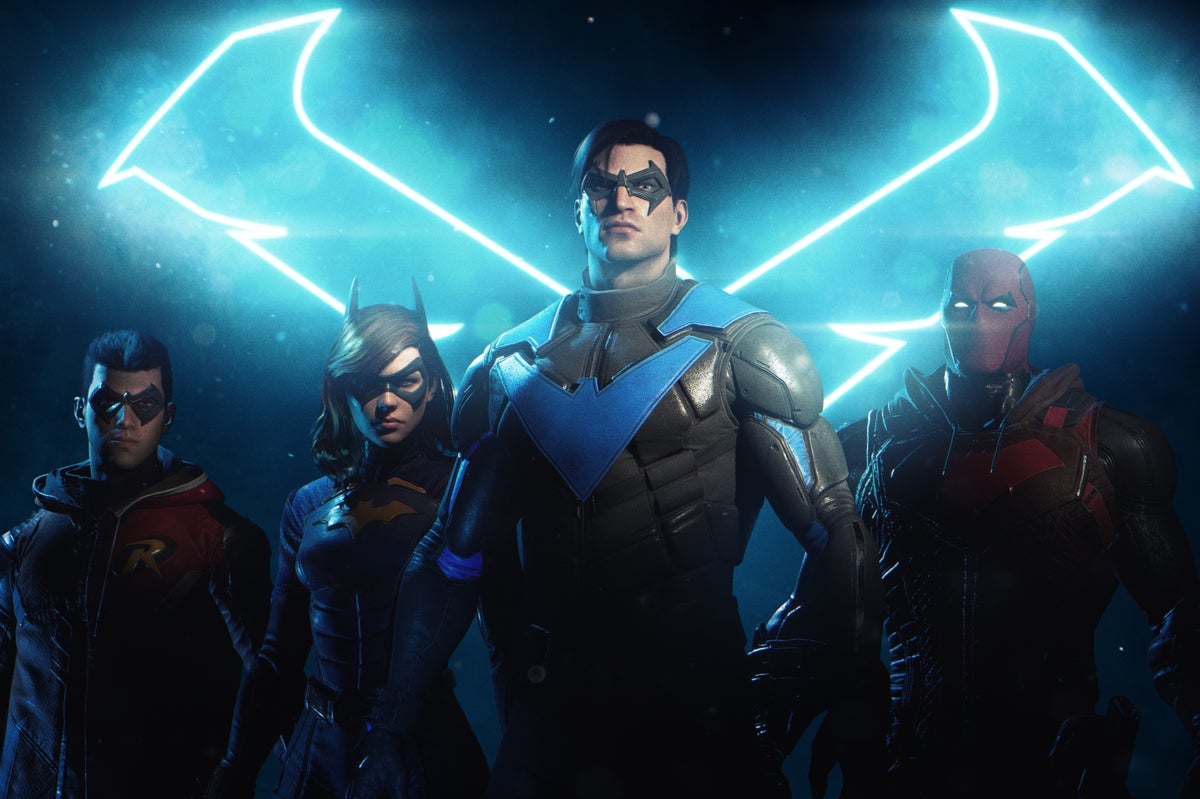 or years, the only plus side to living in Gotham City was that anyone who found themselves in trouble could be reasonably certain that Batman would swoop in and save the day.

In Gotham Knights, they don’t even have that. This is because, in the world of Gotham Knights, Batman is dead (killed spectacularly in the game’s first 10 minutes) and the city’s inhabitants must make do with his protégés.

Our heroes-in-waiting are Nightwing, Red Hood, Robin and Batgirl. Trained by the Bat before his untimely death, they now have to step up and protect Gotham from DC’s rogue’s gallery of villains. That includes Harley Quinn, as well as more niche baddies like Clayface and Mr Freeze.

First things first: game settings don’t come much better than Gotham City and in Gotham Knights you can explore it pretty much in full.

The urban landscape (which you can only access at night, making it feel even more noir) is split into four areas, accessible via a series of bridges. Using the Batcycle and grappling hooks, players can explore it from either the ground or the sky, using the Bat-AI to locate crime hotspots and beat the living daylights out of a revolving band of criminals, alongside pursuing quest objectives to further the story.

However, the game can’t escape the slightly grinding nature of these nightly patrols, where the player will spend almost all of their time. Life as a vigilante has rarely been this granular: every time out “on patrol” a host of new problems will pop up to take care of (foiling a robbery, for instance; or defusing a bomb), many of which end up feeling rather samey. It’s fun for a few hours; after that, it becomes a slog, and I switched my attention to focus on the main storyline. Add to that some at-times clunky controls, especially when using the Batcycle or grappler, and the whole thing has the potential to become eye-rollingly frustrating.

Despite that, the game has the sense to continue introducing new skills and abilities, which keeps the combat interesting. Another big bonus is the ability to switch between any of the four main characters, all of whom have noticeably different playstyles and attacks.

Nightwing is acrobatic and fast, while Red Hood is more of a tank (and has guns) and Batgirl is a genius hacker. The fact that all of the playable characters level up simultaneously means that you won’t have to invest solely in upskilling one of them. It also means that you can match the skillset to your playstyle – ie sneaking past and silently taking out enemies, or just barrelling straight through them, devil-may-care.

Batman does play a role in the game, regardless of his death: in the training area, his voice instructs players in how to execute different stealth or attack techniques; he has left voice-logs scattered throughout Gotham (it’s a voice that’s almost implausibly deep and smooth) and of course, his presence, or lack thereof, is what provides the catalyst to much of the action in this game and drives the protagonists.

The creators of Gotham Knights have clearly put a lot of thought into the world and characters: this is a noir-tinged homage to Batman’s underappreciated sidekicks, and his absence gives the developers some rich material to mine. All of the characters get their own cutscenes that dig into their backstories and baggage, while little Easter eggs (an email exchange about the gang attending Gotham City Pride, for instance) flesh out the world and pay homage to the source material in the comics (where current Robin, Tim Drake, is bisexual).

Despite its flaws, Gotham Knights is a genuinely fun game: packed chock-full of things to do. For my money, it ends up making for a more interesting premise than one where you just play Batman. If only they’d shown as much love to the game journey as they do to the heroes.

Gotham Knights is out on 21 October for PS5, Xbox Series X/S and PC

2022-10-20
Previous Post: Tyson Fury wants to BUY Morecambe and will ‘throw millions’ at League One side
Next Post: Life expectancy improves in some countries after big drops in 2020 – but US and others see further falls