Why many Ukrainians speak Russian as their first language 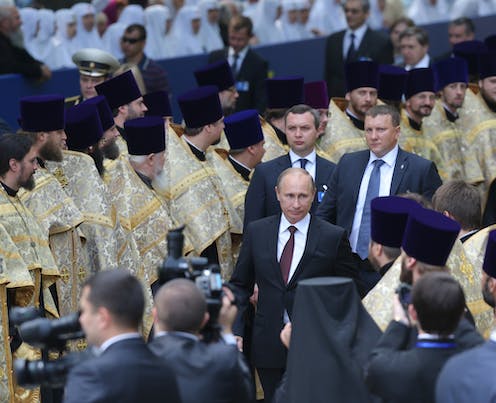 The issue of the Ukrainian language and who speaks it has become highly politicised during the Russian invasion. Vladimir Putin has even used it as a cover to annex some occupied areas of Ukraine with large numbers of Russian speakers.

Based on the 2001 census, about 14.3 million Ukrainian people (29% of the population) speak Russian as a first language, although by some estimates it is higher. The reasons for this lie in the history of the spread of the Ukrainian language and the formation of the borders of modern Ukraine.

Policies prohibiting the use of the Ukrainian language in different historical periods have meant that even ethnic Ukrainians often do not speak Ukrainian. If we look at the map of the spread of the Russian language, below, we can see that a significant part of regions such as eastern Ukraine, Crimea and even parts of Kyiv are Russian-speaking.

Percentage of Ukrainians speaking Russian as a first language

The formation of any language is a long and uneven process that lasts for centuries. One of the theories of the origin of the east Slavic languages, including Ukrainian, is that after the end of the proto-Slavic era, there was a common east Slavic period which lasted for more than 500 years.

This ended in the 11th to 12th centuries, during the feudal fragmentation of Kyivan Rus, an Orthodox medieval state which centred around the contemporary Ukrainian capital Kyiv. According to Ukrainian scholar Ahatanhel Krymsky, the Ukrainian language began to form in the 12th century.

But another theory of the origin of the Ukrainian language states that a common east Slavic period did not exist at all. According to another academic, George Shevelov, the Ukrainian language comes directly from the proto-Slavic language without any intermediate links. According to this theory, the three east Slavic languages Ukrainian, Belarusian and Russian, developed independently of each other. This theory undercuts the Kremlin’s concept of “brotherly nations” as proof of the common root of these three languages.


When Christianity came to Kyivan Rus, the dominant language in the region was Church Slavonic, which was used to write religious and official texts. However, modern Ukrainian is primarily based not on the written language of those times but on the oral language spoken by people in everyday life.

The Ukrainian Soviet Socialist Republic made Ukrainian the official language in 1989. After Ukraine became an independent state in 1991, the Ukrainian language became protected by law in the Ukrainian constitution of 1996. But despite this, parts of Ukraine continued to be predominantly Russian-speaking.

The movement of people and the frequent redrawing of Ukraine’s borders have all resulted in Russians being the largest ethnic minority in Ukraine.

Until 2014, one of Ukraine’s most popular social networks was the Russian social network VKontakte. A map compiled by Ukrainian language researcher Andriy Lopata shows how much Russian language content was consumed in Ukraine during 2015. Also, books written in Russian were widely published in Ukraine, Russian music was played on the radio, and there was a constant cultural exchange with Russia.

The pro-European revolution of 2014 resulted in a wave of protests against the Russian language as the language of an enemy aggressor country, and laws were passed introducing quotas for the Russian language and rules about its use in public spaces. All these political actions and restrictions were then mentioned by Putin in his 2021 influential article (On the Historical Unity of Russians and Ukrainians) as examples of discrimination against Russian-speaking Ukrainians.

Russia’s full-scale invasion of Ukraine began in February 2022, provoking a wave of refugees and internally displaced people. The eastern regions of Ukraine (the areas with the most Russian speakers) were the first to be attacked by Russia. Some residents from these regions fled west and there were reports of aggression from Ukrainian-speaking people against Russian speakers.

Some Russian-speaking Ukrainian refugees who have gone abroad have also sometimes faced misunderstanding and criticism from locals in their new home, as was the case, for example, in Poland.

There continues to be a misunderstanding that the Ukrainian language defines people as Ukrainian, but as with many other countries around the world, Ukraine is a multilingual society formed by a complex history.

Ievgeniia Ivanova does not work for, consult, own shares in or receive funding from any company or organisation that would benefit from this article, and has disclosed no relevant affiliations beyond their academic appointment.

2022-10-17
Previous Post: Somewhere Boy on Channel 4 review: it will knock your socks clean off
Next Post: The UK’s Homes for Ukraine scheme is failing both refugees and their hosts – here’s why