Ukraine war: with Russia bogged down on the battlefield, trouble has flared up again in the Caucasus 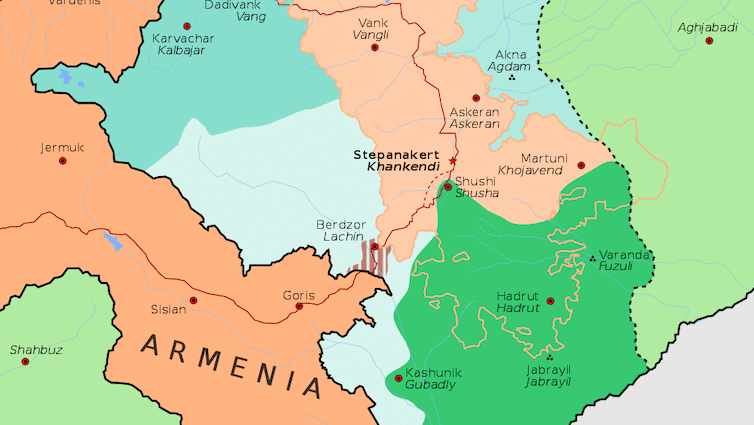 Almost two years ago, what is now referred to as the “Second Karabakh War” broke the uneasy truce which had been in effect between Armenia and Azerbaijan since 1994. After 44 days of intense fighting – with thousands of dead on both sides – it ended in a precarious, Russian-mediated ceasefire on November 10, 2020.

The nine-point document setting out the terms of the ceasefire in the disputed Nagorno-Karabakh region of the South Caucasus largely cemented the gains made by Azerbaijan during the war. Among others, it provided for a withdrawal of Armenia’s troops from Azerbaijan and the restoration of economic and transportation links between the two countries. This is particularly important for Azerbaijan, whose access to its Nakhchivan exclave is separated by Armenia’s Syunik province. The agreement also included arrangements for the stationing of Russian peacekeepers in Nagorno-Karabakh until at least 2025.

This ceasefire has been fragile from the start. But Azerbaijan’s recent shelling of several towns and villages across its border with Armenia is different from previous crises. These are by far the most violent hostilities since the war in 2020. And this time, they are taking place in the Republic of Armenia – a nominal ally of Russia’s – rather than Nagorno-Karabakh itself.

Two factors are at play in this latest series of escalations. The first is the tortuous effort – led by Russia and the EU – at negotiating the ceasefire and a final peace agreement. Now there is the added uncertainty brought by Russia’s setbacks in Ukraine, which has compromised Moscow’s position as a security guarantor.

Talks on a normalisation of relations between Armenia and Azerbaijan have notably stalled around the final status of Nagorno-Karabakh and of the transportation links through Armenian territory. For Azerbaijan, the Karabakh conflict is over – and it has ruled out Armenia’s demands for special status for the local ethnic Armenian population, which it classes simply as citizens of Azerbaijan.

Armenia, on the other hand, wants security guarantees and territorial status for the local Armenian minority. They have complained about a deliberate policy of cultural erasure and ethnic cleansing in territories under Azerbaijani control.

The two sides are also at loggerheads regarding the precise nature of their transportation links. For Armenia’s prime minister, Nikol Pashinyan, they involve simply opening the – hitherto closed – state borders to road and rail traffic under continued Armenian sovereign control. Azerbaijan, by contrast, is demanding the establishment of an extraterritorial corridor to Nakhchivan (see map, above) – and further to its stalwart ally Turkey – which would run through Armenia’s strategically important southern province of Syunik.

Efforts at negotiating a way out of the impasse have, so far, failed. They are now further complicated by Russia’s invasion of Ukraine. Three parallel negotiating frameworks have emerged as a result.

One, run by the OSCE Minsk Group co-chairs – France, Russia and the United States – was the dominant negotiating forum for the two sides before the 2020 war. It has been declared defunct by both Russia and Azerbaijan – although France, the US and Armenia appear to remain committed to its continued existence. A second consists of trilateral efforts by Russia with Azerbaijan and Armenia to put the 2020 ceasefire agreement into action and finalise a permanent settlement. Meanwhile, the European Union has recently emerged as a third mediator, actively pushing for a comprehensive peace agreement between Azerbaijan and Armenia.

These largely uncoordinated negotiations have been complicated by the mediators’ clashing interests and broader geopolitical developments – notably in Ukraine. Importantly, neither Russia nor the EU are disinterested parties in the region. As its longtime imperial power, Russia has an interest in maintaining – and extending – control through its peacekeeping presence in Nagorno-Karabakh. The sanctions regime imposed by the west makes the opening of direct overland transportation links to Turkey over Azerbaijani and Armenian territory a particularly appealing prospect for Moscow.

The EU, meanwhile, is primarily interested in safeguarding Azerbaijani natural gas supplies. It also wants to see Russian power in the region diminished – including, possibly, the departure of Russian troops from Nagorno-Karabakh itself. With Russia as Armenia’s primary security guarantor, Azerbaijan’s temptation to engage in armed diplomacy appears to wax and wane with Moscow’s fortunes on the Ukrainian battlefield.

This presents Armenia, in particular, with major dilemmas. Since its peaceful “Velvet Revolution” in 2018 replaced a semi-authoritarian regime with a more liberal administration led by Pashinyan, the country has maintained its decades-long pro-Russian geopolitical orientation while reforming its political system along liberal-democratic lines. Moscow, meanwhile – weakened in Ukraine and not interested in alienating Azerbaijan or Turkey – has shown itself reluctant to intervene directly in Nagorno-Karabakh beyond its peacekeeping presence there.

For Armenia, switching its national security orientation away from Russia at a time when it has arguably been at its weakest geopolitically since independence implies considerable – possibly existential – risks in the absence of a clear alternative. And Pashinyan’s government may not survive the humiliation of agreeing to offer Azerbaijan an extraterritorial corridor in a strategically critical location or having to leave Nagorno-Karabakh’s population to an uncertain fate.

With a shaky ceasefire again in effect and the US house speaker, Nancy Pelosi, scheduled to visit Armenia imminently, the next round of EU sponsored negotiations between the sides is scheduled for November. It remains to be seen whether the criss-crossing negotiations, conflicting interests and imbalances of power between the participants will allow for any kind of sustainable outcome.

In any case, the idea of a “rules-based order” appears as distant as ever in a South Caucasus subject to the laws of raw power. It doesn’t bode well for security in other parts of an increasingly unruly world.

Kevork Oskanian does not work for, consult, own shares in or receive funding from any company or organisation that would benefit from this article, and has disclosed no relevant affiliations beyond their academic appointment.

2022-09-16
Previous Post: Thinking about quiet quitting? Here’s why – and how – you should talk to your boss instead
Next Post: A fossil baby helped scientists explain how mammals thrived after the dinosaur extinction – new research