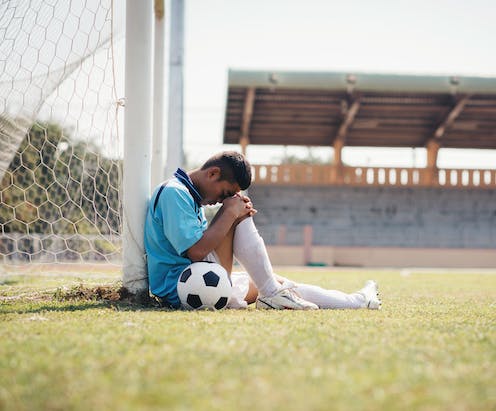 Boys who want to be footballers have a difficult dream to achieve. Of the 1.5 million boys who play organised youth football at any given time in England, only around 180 will be signed professionally by a Premier League club.

This dream can feel within a boy’s grasp, though, when he is signed to a professional football club’s academy. Academies run from the under-nine age group all the way up until the under-23s. From around the age of 12, players can be brought out of school to attend training. At 16, players are offered a two-year scholarship at their club and become full-time.

However, 50% of all academy players leave the academy system before they are 16. Recent data on former elite academy players has shown that 97% did not go on to play Premier League football. Vast numbers of boys are released from professional football clubs every year.

The impact of being released from football academies can lead to depression, anxiety and a loss of confidence. In 2020, former Manchester City academy player Jeremy Wisten killed himself, aged 18. He had been released from the club’s academy two years previously after a long-term injury.

Together with colleagues, I have recently published research exploring the experiences of young players released from professional football academies. We held in-depth interviews with four youth footballers, who were released from their academies between 19 and 20 years of age.

We found that the initial contract meeting, in which the players learned they were being released, was a traumatic experience. All of the players were brought from a changing room full of their teammates to learn their fate. One of the young men we interviewed said:

Yeah, it was emotional. Obviously you hold it all in but you’re sitting there and it’s like… I’ve been there for five years, you know the kit man, all the lads, the coaches and you literally get told no, and it’s within ten minutes, you’ve got all your stuff and you’re out and you never see them again. So it’s just kind of like from everything to nothing in a split second.

In the longer term, in some cases up to a year after their release, three of the four players experienced psychological difficulties including depression and anxiety. One of our participants said:

I won’t lie to you, yeah I did get down after I left. Like, properly … like I’m not gonna sit here and try and tell anyone it doesn’t affect you, it affected me more, like … a year after … or like, six, seven months after.

All of the players we spoke to reported that they received no support or aftercare from their clubs, which added to their difficulty transitioning away from the club. One said:

The club kind of just leave you to it which is hard because you’d been there for so long. Then they just brush you aside like you’re nothing.

The players found it hard to go to their parents for help, because they did not want to burden them with their emotional difficulties.

One player did note the excellent support provided by the Professional Footballers’ Association (PFA) and the counselling network they provide. Counselling from the PFA is optional, though, and the player was the one to contact them for support. Automatically scheduled counselling could make a difference to players released from academies.

Another spoke of the benefit of seeking support through independent counselling services:

I literally just remember … I was like, so down. I had counselling and I just remember I had four hour[-long] counselling sessions and I must have just cried for about 45 minutes of each. Yeah, I felt well better after … I think it makes you a better person now ‘cos you’re so resilient to most things.

Players released from academies also need more support from their clubs. Academies could develop pre-release programmes aimed at preparing players for release which could support their transition away from their club. This could include focusing on players’ coping skills, improving their ability to seek social support and developing their confidence and self-esteem.

In January 2022, Crystal Palace Football Club announced that they would offer three years of aftercare for released players between the ages of 18 and 23, with a “player care officer” allocated to released players to support them and help them find a new football club or move into education or a job.

In June 2022, new guidelines passed by the Premier League will require all Premier League and English Football League clubs to give a three-year “commitment of support” to released academy players. Initiatives like those at Crystal Palace are hopefully the start of a sea change in the British academy system. If more clubs follow suit, they can help prevent those childhood dreams from becoming nightmares for released players and their families.

Thomas Ryan McGlinchey does not work for, consult, own shares in or receive funding from any company or organisation that would benefit from this article, and has disclosed no relevant affiliations beyond their academic appointment.

2022-09-15
Previous Post: Young people may be more likely to believe in conspiracy theories that deny COVID facts – here’s how to respond
Next Post: Inside Federer’s life from 20 Grand Slams to mansions & 13-year marriage