Anti-monarchy protesters arrested – an expert on what the law says 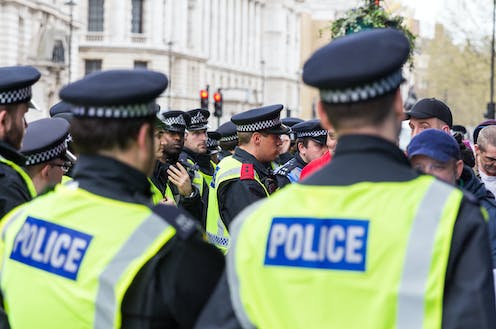 For many, the week following the death of the Queen has been a time of mourning. It has also been one of tension around the question of free speech and protest. There have been several instances of police arresting or questioning protesters expressing anti-monarchy sentiment in London, Oxford and Edinburgh.

It is difficult to see what criminal offences protesters might have committed by shouting “not my king” or “abolish the monarchy” as the royal procession of the casket made its way along the streets, or at public proclamations of King Charles III the new monarch.

The right to peacefully protest is protected in domestic law, and the European convention on human rights’ protection for free expression (article 10) is enshrined domestically in the Human Rights Act. European case law makes clear that these protections cover speech that offends, shocks or disturbs the state or any sector of the population.

The Metropolitan Police has said, “The public absolutely have a right to protest and we have been making this clear to all officers involved in the extraordinary policing operation currently in place.”

It’s not entirely clear what powers police relied on to make arrests in each case, but there are three likely possibilities: section 5 of the Public Order Act 1986, public nuisance (under the new Police, Crime, Sentencing and Courts Act 2022, and arrest to prevent breach of the peace.

In domestic UK law, there is no right not be offended, and so no crime premised mainly on causing offence. To breach section 5 of the Public Order Act, one has to be using threatening or abusive language that likely causes someone else harassment, alarm or distress (or engages in disorderly behaviour).

In the case of these arrests then, we have to consider whether the chants or placards in question were threatening or abusive. It would be very difficult for police to argue either – particularly in the case of protesters holding blank placards or simply shouting, “Who elected you?”

The case against protesters would have been stronger before 2013, when “insulting language” was deliberately removed from section 5 to provide greater free speech protection. There is a greater case against the Edinburgh protester who was arrested while holding a “Fuck imperialism, abolish monarchy” placard. She was arrested in connection with a breach of the peace rather than for threatening and abusive behaviour, under the Criminal Justice and Licensing (Scotland) Act 2010, the equivalent to section 5 north of the border.

In free speech cases, context is key. Unwittingly encountering such profanity is very different to any expected or warned-about profanity in theatrical performance. That said, if we arrested and prosecuted anyone who said “fuck” in public, our prisons would be fairly full. The issue here then is about differential policing, treating political speech differently, indeed counter-intuitively as lesser than other speech.

Even if the placards were considered to be abusive, section 5 of the Public Order Act contains a “reasonable conduct” defence. This is where the protection of free speech as a human right comes in. In short, protesters can argue that if all they are doing is exercising their free speech right under the European convention on human rights, that means their conduct is “reasonable”.

There is supreme court authority to that effect in the context of a disruptive roadblock: a protester should only be arrested, certainly only charged, with obstruction of the highway where it is proportionate to do so. With that balancing equation in mind, these arrests would very likely constitute a disproportionate response.

Public nuisance and breaching the peace

Equally, it is hard to see charges of public nuisance (newly created in the 2022 Police, Crime, Sentencing and Courts Act) being made good. First, it requires serious distress and serious annoyance to the public or a section thereof. And second, the act also contains a reasonable excuse defence. None of the arrests appear to have been made under the new act.

The likeliest justification for formal police intervention might be under the wide and uncertain power in common law to “prevent a breach of the peace”. The law here is slightly different, in terms of trigger test, in Scotland and England. Certainly, the arrests of republican protesters in Scotland were made under that power.

In England and Wales, case law establishes that the police have the power to take proportionate action to prevent breaches of the peace. While there are no reports of actual violence, the power to step in – and indeed arrest – might arise where the police reasonably believe violence to a person or property might imminently be done at one of these events.

The question is then: who should they arrest? The placard-holders and shouters, or those lining the route who are beginning to show irritation and could turn to violence?

It helps to look to a 1999 case, Redmond-Bate v Director of Public Prosecutions, where three strident and vociferous Christian fundamentalists were preaching in Wakefield. Several people objected. The preachers refused to quieten and were arrested for obstruction.

They appealed their arrest, and the court laid down this distinguishing test: were the preachers being so provocative that someone in the crowd might reasonably be moved to violence? Or were passersby taking the opportunity to react and cause trouble?

The answer to this is obviously a judgement call for officers on the spot. In the case of the republican demonstrators, without any evidence of likely violence, the police probably should not have acted. The rest is context-specific. Even with heightened current public sensitivities, being provoked by a simple sign proclaiming “not my king” is probably not reasonable.

Perhaps these arrests might now bring into question whether such an open-ended common law policing discretion – one never set out in an act of parliament – sits well in a liberal democracy.