Behind the scenes at the United Ukrainian Ballet: ‘This is the beginning of a renaissance’ 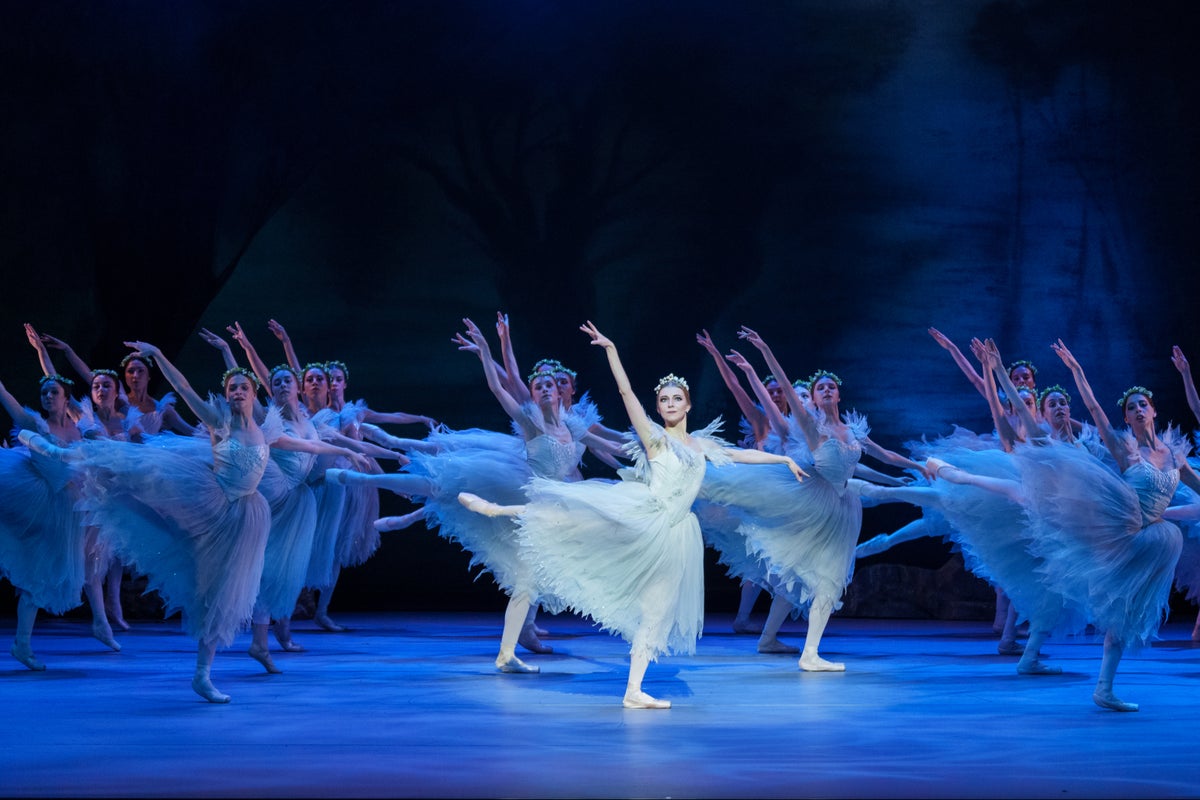 he first thing that strikes you on entering the old Royal Conservatoire in The Hague is the noise. Small children race around the reception desk, shouting in Russian and waving toys.

Then comes the detritus of everyday life. A pile of washing and an ironing board peeks out from behind a door. A Maine Coon cat regards us solemnly from behind a glass window; delicious smells waft up from a makeshift kitchen on one of the floors.

It all comes as a bit of a surprise in this most august of institutions – especially as the venerable building should have been long demolished by now. But then, nothing happening in the Royal Conservatoire right now is normal.

For thanks to a superhuman effort from the ballet world, volunteer organisers and even Olena Zelenska, wife of the country’s president Volodymyr, the United Ukrainian Ballet is set to perform Giselle at the London Coliseum this September.

The performance is an effort to celebrate Ukrainian culture and raise funds for humanitarian aid at a time when the war is starting to fade from the West’s mind.

And when Ukrainian ballet star Alexei Ratmansky – a former principal dancer with the Ukrainian National Ballet and the Royal Danish Ballet – got involved, it took the project to a whole new level.

“I’m inspired,” he tells me. “I want it to happen. I think it’s very important to show the world that Ukrainian ballet exists, it’s strong, there is a quality here and that we can deliver.”

Ratmansky is no stranger to the impact of the war. As one of the world’s leading choreographers, and the former artistic director of Russia’s Bolshoi Ballet, he left his posting there the day that war broke out – an experience that he describes as “surreal”.

Now, he splits his time between the American Ballet Theater (where he is the artist in residence) and the Hague, choreographing Giselle for these dancers in exile.

In the process, he severed his links with Russia, the country where he trained and that was his home for more than two decades – and with a culture that is inextricably linked with the identity of so many Ukrainians who live close to the border (like them, Ratmansky’s native tongue is also Russian).

“I find it very hard and I don’t have the answers to my questions,” he says. “It’s a big mess, because part of my identity is suffering, it’s shamed, it’s broken. And then you must find a way to heal.”

He has no intention of returning to Russia – “not until Putin is imprisoned”. Instead, he is determined to spotlight the power and potential of Ukrainian ballet, conducting a quiet rebellion from afar.

“Ukrainian ballet was always in the shadow of Russia,” he says. “Even the dancers at the Bolshoi or Mariinsky who were of Ukrainian origin were always called Russian.

“I think now they will look to history and find more and more distinction in Ukrainian ballet. I hope that it is the beginning of a renaissance of Ukrainian ballet, and Ukrainian art. I guess you’d say the same with artists; with literature; with cinema and theatre.”

He is adamant that Ukraine’s ballet tradition be kept alive: if nothing else, because ballet is an art form that requires experience to be passed down from generation to generation.

“The knowledge is passed down, and it’s not always verbal. It’s through the body, the sensations of the body. It’s a beautiful thing. We act; there is a theatre and presentation to ballet. There is the physicality of an Olympic sport. And there is a musicality. It’s really a unique blend of different arts.”

The story of the United Ukrainian Ballet starts with Dutch prima ballerina Igone de Jongh, who heard that two ballet dancers from her company had been crying in their dressing room.

When asked why, they said that their country had been invaded. In response, De Jongh and a team of industry experts called in several favours and set about creating a safe space for Ukrainian ballet dancers to stay as they fled their homeland.

When Ratmansky was asked if he wanted to join, the answer was a resounding yes. “Dancers lost their jobs, lost their homes, because they just didn’t feel safe,” he says.

“You know, a few theatres in Ukraine have kept performing; I think there are performances in Kyiv, but they’re very small scale and more like little galas. The majority of Ukrainian dancers have left the country. There is a big wave of immigrants.”

Many of them have ended up here. Now, the company is around 80-dancers strong (though they share the space with other refugees), comprised in equal parts of women and men – many of whom had to be given special dispensation to leave the country, turning up at the border with documents approved by Olena Zelenska.

Almost everything they have has been donated or loaned: the costumes for Giselle have come from the Birmingham Royal Ballet; the teachers (many of whom are big names in the ballet world) are volunteering out of dedication to the cause; the furniture has come from charity shops or has been given free of charge.

Walking through the Conservatoire is a surreal experience. Though the laundry, the cat and the children give the impression of chaos, this is a building that is run like clockwork.

Due to a lack of space, groups of three or four people must share repurposed classrooms, with roommates being allocated according to familial bonds or friendships. In one classroom, a group of small children and one teenager are being taught Dutch; on the floor above, men and women train with mechanical precision under the watchful eyes of their teachers.

In spite of their shoestring budget, the dancers’ belief in what they are doing is palpable – even if they are adamant that they would rather not be here at all. “In the first two or three weeks of the war, we didn’t know what to do,” Stanislav Olshanskyi says.

“We were lost: we danced, but only because our bodies knew how to dance. But we thought only about the war, and we felt guilty: why are we here? Why are my friends there; why are my family there? Why were we the lucky ones?”

Olshanskyi, the company’s newly-minted soloist, was one of the two original dancers in De Jongh’s company, and many of his family and friends are still in Ukraine.

Though he has never been busier – Ukrainian dancers are in demand around the world these days – the main emotion that comes through during his interview is anger.

“Before this situation in Ukraine, I was apolitical,” he says. “It wasn’t important. I was an artist: I just wanted to live, to be happy. But now I understand that it doesn’t work like this. You should be political. You should fight for your freedom, for your happiness; for all that you want. You should fight, every day.”

For him, being a part of this ballet is a way to show his support for Ukraine – with the space acting both as a base in sending on donations from the West, and as a way to showcase the country’s culture.

“Now we know how we can help,” he says, twirling a pen through his fingers. “We know what we can do. That’s why now we don’t feel as guilty. Because we’re here; we know we can help here. We can help much more than we would in Ukraine.”

This theme is one that comes through again and again in the stories of the dancers that I speak to: they want to help their country.

Many of them have overcome extraordinary odds to get here: the owners of the Maine Coon cat, ballet-dancing couple Veronika and Vlad, tell me how they travelled from Kyiv into Kharkiv when war broke out, in order to find their families.

In the first few weeks of the war, Veronika’s grandparents’ house was bombed. The picture she shows me of their street is apocalyptic: rubble everywhere, entire buildings sheared in half.

“My grandparents were inside. I don’t know how – they were really lucky because my grandmother was near the wall,” she explains. “And my grandfather was by the open door. So that’s why they were saved.”

After that, the family decided to leave, but the pair are all smiles as they recall how they managed to wrangle their cat (called Boston) into a car and flee the country with their families. Veronika left first; Vlad eventually followed, reaching the Conservatoire in May.

“But dance is a good opportunity to tell stories. So this is our instrument for telling stories, and maybe we can tell some stories about what happened in in Ukraine,” Vlad finishes.

After London, the company will be touring other cities in Europe, but precisely what will happen after Giselle is uncertain.

While everybody is aware that the Conservatoire is a temporary solution – and ideally one that shouldn’t exist at all – the United Ukrainian Ballet looks set to continue for as long as the war does, spreading its message around the world and offering its dancers refuge and purpose.

“Art is a mirror of reality. It can’t change anything, but it can help people leave through difficult times and heal wounds,” Ratmansky says.

“The essence of art is something that goes very deep to your heart and grabs it. The best quality art does that.”

One thing is for certain: despite the circumstances of its telling, theirs is a message worth hearing.

Giselle will be at the London Coliseum from September 13-17; londoncoliseum.org

2022-08-24
Previous Post: China property crisis: why the housing market is collapsing – and the risks to the wider economy
Next Post: This Giant Sprinkler System Can Protect Cities From Wildfires