BRITS are facing more summer holiday travel misery this weekend as yet another strike grips today.

Train services will face delays and cancellations across the country – just a day after tens of thousands of workers staged a walk-out on Thursday.

The chaos is set to last until at least Sunday amid strikes at Network Rail, across train services, on the London Underground and on bus routes.

Members of the Rail, Maritime and Transport (RMT) union, Transport Salaried Staffs Association (TSSA) and Unite are involved in the industrial action after ongoing talks failed to break the deadlocked rows.

Four out of every five trains will not run on Saturday, and there’ll be fewer services on Sunday as staff get back to work.

Yesterday, chiefs at Transport for London gave a grim warning to travellers hoping to make the most of the school break. 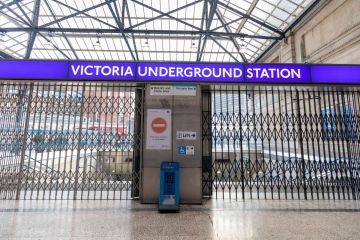 A spokesperson said: “Strikes on national rail services are expected to cause severe disruption.

“Only travel on national rail services if absolutely necessary.”

Buses in West and South West London, as well as parts of Surrey, will also be hit with problems.

The Tube was deserted yesterday because of strikes. Services will resume this morning after 8am, when a normal programme should begin again.

However, there will be disruption on the Overground, and no services either before 8am or after 6pm.

Avanti West Coast is advising customers to travel only if absolutely necessary today. The company will run one train per hour from Euston to Manchester, Liverpool, Birmingham, Preston, with a limited service on to Glasgow.

North Wales, Shrewsbury, Blackpool and Edinburgh will have no services. Stockport, Macclesfield, Stoke-on-Trent and Runcorn stations will be closed.

Chiltern are advising customers they will be running an extremely limited service, without a replacement bus service.

CrossCountry will be running a extremely limited service. Today, trains will only run between Derby and Edinburgh and between Southampton Central and Manchester Piccadilly.

All Gatwick Express trains are cancelled.

There will also be a huge number of cancellations on Great Western Rail, South Western, Southeastern, and both West and East Midlands Railway.

Anyone hoping to travel is urged to check for information before leaving.

RMT chief Mick Lynch said the strike “won’t be broken” until there’s a settlement to the dispute.

Speaking from a picket line at Euston on Thursday, he warned: “We don’t have a fixed programme – I don’t have a whiteboard saying it starts on this day and it ends on that day.

“We won’t be broken. We are determined to get a settlement.

“People have shown on the picket lines they are determined to dig in, we’re not going to waste our members’ efforts.

“We will continue the fight until we get a settlement.”

Transport Secretary Grant Shapps has hit back, blasting: “It’s clear, from their co-ordinated approach, that the unions are hell-bent on causing as much misery as possible to the very same taxpayers who stumped up £600 per household to ensure not a single rail worker lost their job during the pandemic.

“Sadly, union chiefs have short memories and will be repaying this act of good faith by ruining millions of hard-working people’s summer plans.”

Network Rail chief executive Andrew Haines said: “It saddens me that we are again having to ask passengers to stay away from the railway for two days this week due to unnecessary strike action, when we should be helping them enjoy their summers.”

2022-08-20
Previous Post: Damon Albarn hails ‘most local’ gig as Gorillaz headline All Points East
Next Post: Why you should have more sympathy for seagulls – and how to stop them stealing your chips