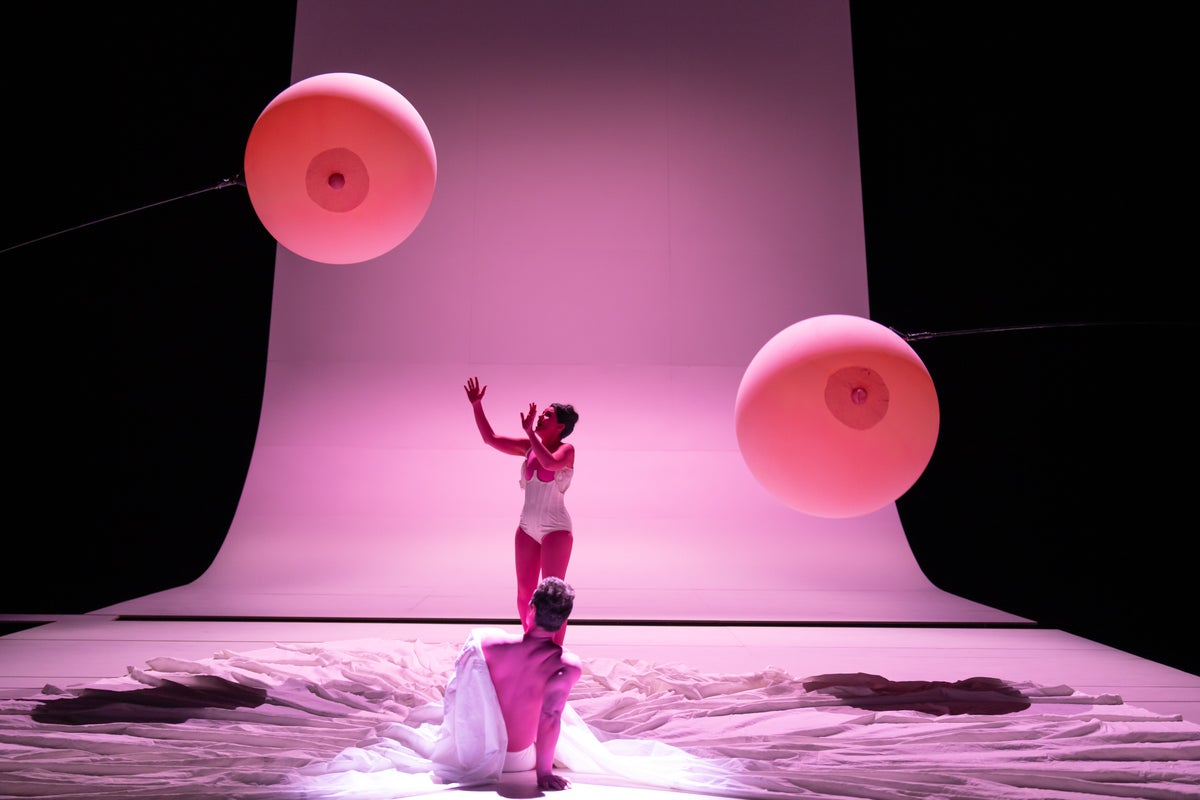 he eponymous appendages in Poulenc’s comic opera Les mamelles de Tirésias are deflated by their owner, Thérèse, on announcing she’s a feminist and wants to run the country – or go to war. She grows a moustache, leaving her function as a propagator of babies to be taken over by her husband, who demonstrates that anybody can do it, with a bit of ingenuity and willpower.

This somewhat unpromising scenario – and the exploding breasts are juvenile or hilarious according to taste – is introduced by the ironic announcement (or is it?) of the Theatre Manager, in a prologue, that the moral of the drama is that France must make more babies. President de Gaulle, the country’s new leader, said much the same thing in a speech immediately after the Second World War, urging the French people to produce “12 million beautiful babies in 10 years”.

What may seem like an opera on gender transitioning as we know it several decades ahead of its time, is actually nothing of the sort, and director Laurent Pelly, probably wisely, does nothing to nudge it in that direction. Written in the 1940s and based on an earlier play by the surrealist Guillaume Apollinaire, The Breasts of Tiresias may more plausibly be described as a timely contribution to the wider question of gender relations in interwar France, even if its point of view is worryingly ambivalent.

Poulenc’s easy-going, tuneful music is translated by Pelly and set designer Caroline Ginet into an entertaining poster-colour vaudeville, and Elsa Benoit and Régis Mengus lead a fine, predominantly francophone cast under Robin Ticciati’s ebullient direction. There are some stunning stage spectacles, not least that of the 40,000-odd puppet babies, the front row turning out to be chorus members. But the opportunity to tap into contemporary debates about gender roles for a modern audience is largely passed up.

Fortunately the work with which it is paired, also by Poulenc, La voix humaine (based on a play by Jean Cocteau, recently adapted too for the West End stage by the director Ivo van Hove, and for the screen by Pedro Almodóvar), offers a more penetrating treatment of a subject that barely needs updating. The protagonist, Elle (She), suicidally depressed by the break-up of a relationship, spends 40 minutes on the telephone, mostly talking to her former lover (when not dealing with crossed lines). Gradually and painfully she comes to acknowledge what she must have suspected: that he has abandoned her for another.

Poulenc’s laceratingly sensual score (admirably conducted by Ticciati) fills in the emotional turmoil that Elle tries hard to disguise. Here she sprawls on a slab – one hopes this isn’t the bed mentioned in the stage directions – whose occasional tilting neatly suggests the highs and lows of a depressive. Her psychological state is also evoked by a roseate horizontal strip which appears as she recalls happier times, but is finally snuffed out as realisation dawns.

One could conceive of directorial touches further enhancing the poignancy of the unfolding drama, but Pelly’s production serves well enough, given Stéphanie d’Oustrac’s mesmerising incarnation of the broken woman whose final telephone conversation we are probably witnessing.

2022-08-16
Previous Post: Tavistock Clinic fallout: what the courts would consider in litigation by former patients
Next Post: Why are gas prices still high despite oil getting cheaper – and what will happen next? Energy expert Q&A