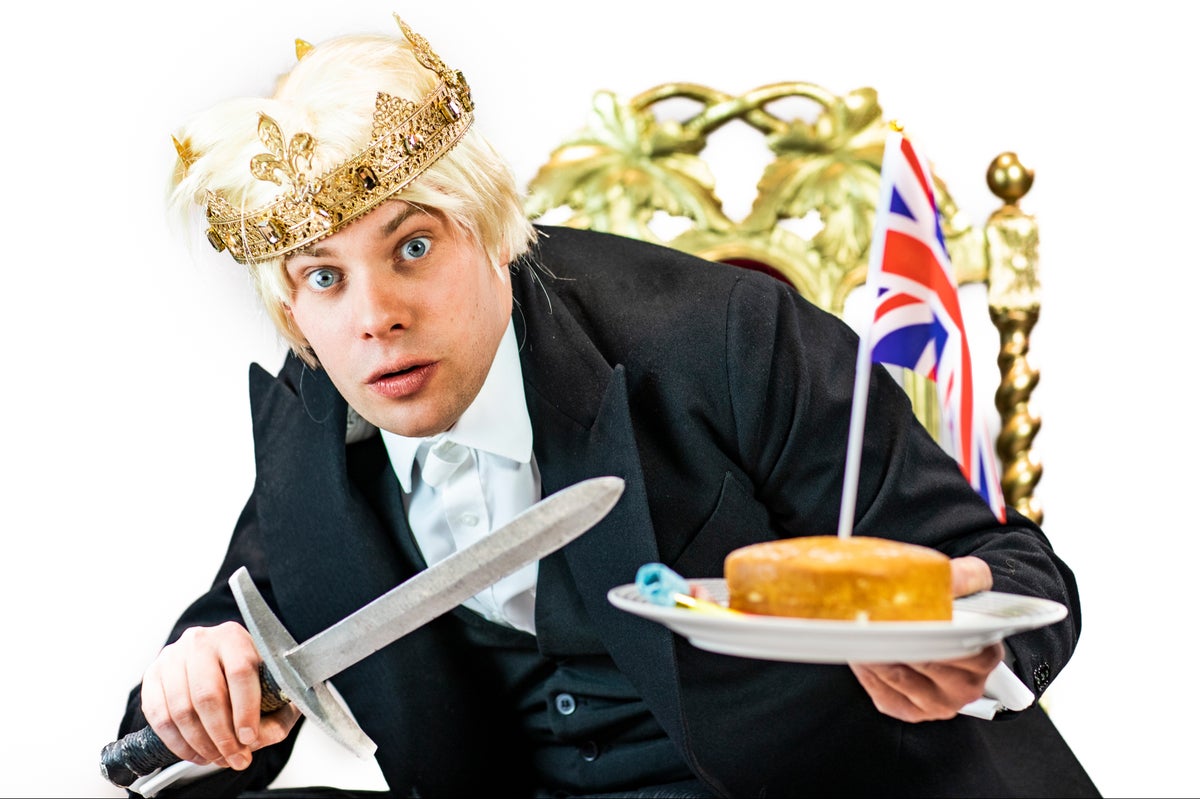 he queues stretch round the block for Adam Meggido’s Boris Johnson satire, and it’s easy to see why. This is an Edinburgh fringe whose line-up largely ignores recent major world events – it’s full of tender, thoughtful shows dreamt up pre-pandemic, pre-cost of living crisis, and pre-partygate. So the prospect of a little cathartic group rage is delicious.

As the auditorium fills, you can feel the audience bristling in anticipation, ready for an Orwellian two-minute hate session directed at their haystack-haired, hangdog-mouthed, belatedly-ousted leader. But unfortunately, this underwhelming comedy offers nothing to fuel the fires: it’s as limp and unappetising as a soggy biscuit.

Meggido bases his story on an intriguing snippet from Boris’s ignominious biography. Apparently, as an 18-year-old schoolboy, he played the title role in Shakespeare’s Richard III, failing to learn his lines and pasting the script to the set’s pillars so he could shamble his way through the action. So this comedy transports us straight back to 1982, as the Falklands War simmers, to a rehearsal room at Eton whose occupants are on the verge of mutiny.

Boris is late, as usual: he’s been held up at a “mass debating” competition, as one of his co-stars punningly complains. Meanwhile, his girlfriend/leading lady Katie is fuming after finding out that he’s slept with her sister Agatha, and the teachers are on his case after he hosted a “communal homework gathering” that looked suspiciously like an illicit dorm party.

This BoJo origin story presents the PM as fully formed from day dot, already on obfuscating, womanising, illegal party-holding form. And that sense is amplified by Mischief Theatre alumnus Harry Kershaw’s central performance. The real-life Boris often looks like a chastened schoolboy, but ironically, Boris seems unconvincingly grown up here: Kershaw replicates all of Boris’s familiar vocal tics, delivering his lines with a portly bluster that’s suggestive of decades of successfully getting away with it.

And instead of the kind of all-out mayhem this kind of farce needs, we get a series of contrived set-pieces. The student actors are led by a visiting professional director, whose ethnicity is used to demonstrate Boris’s racism in what feels like an underexplored way – in a fury, he calls her a “piccaninny”.  Conveniently, Agatha’s boyfriend is a marine, so he turns up to rage against the way the students use the Falklands War as jingoistic set-dressing for their own dramas.

Boris the Third is taking aim at all the right targets, but it only lands surface wounds. This is juvenile humour, seldom looking beyond the walls of the sixth-form common room, and with little suggestion that real world repercussions follow from these Etonians’ jolly japes. Instead, this is a thin, just-about-enjoyable bone, thrown to an audience that’s hungry for something more satisfying.

2022-08-11
Previous Post: Former world champ boxer David Lemieux’s father murdered at a bus-stop during horrific shooting spree in Montreal
Next Post: Curious Kids: is it possible to see what is happening in distant solar systems now?