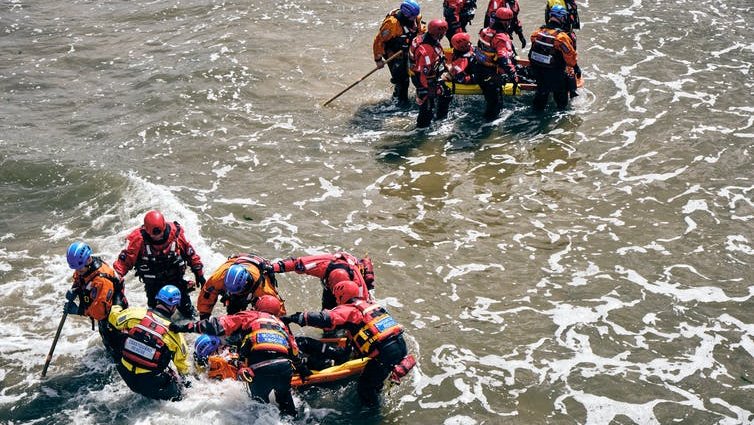 When London was preparing to host the 2012 Olympic Games, 250,000 people signed up to volunteer as official “Games Makers”. Of these, 70,000 people were ultimately selected to wear the distinctive purple-and-red volunteer uniforms. For 40% of them, it was the first time they’d done anything like this.

In the run-up to the Games, Sebastian Coe, chair of the London 2012 Organising Committee, highlighted how important this kind of community engagement was. “Volunteers are the lifeblood of the Olympic Games,” he said. “The 1948 Olympics in London saw the birth of the Games volunteer programme, and we are determined that London 2012 will be a wonderful opportunity for tens of thousands of people to help deliver the most spectacular Games ever.”

From the beginning, the idea was not only to get people involved in the event but to inspire them to keep volunteering well beyond the 16 days of the Games themselves. Further, this engagement was seen to be a strategic means of getting people into full-time, paid employment.

One key aim was to bring people as well as businesses, institutions and city authorities together to focus, as the Department for Media, Culture and Sport put it, on the long-term development of London. Volunteering at mega-sport events like the Olympics can give people a sense of pride and enthusiasm, and motivate them to find other avenues for staying involved in the community in the long-term.

But subsequent research has found that if people continued volunteering in the decade since the London Olympics, it was not down to any formal or coordinated effort on the part of the Games’ planners. In fact, many volunteers were unaware of such plans. Rather, their enthusiasm was born in more ad hoc ways out of people’s positive memories, personal experiences and London 2012 nostalgia.

What London 2012 volunteers did

For some people, volunteering at the London Olympics was mostly about the free tickets to the best sporting events in the world. For others, “wearing purple”, as one volunteer put it, also meant you had the opportunity to develop key skills.

Games Makers’ duties covered a wide range of tasks, from being event stewards, drivers and welcome staff to supporting athletes and checking tickets. Others provided assistance with costumes, equipment and accreditation, or performed at the event ceremonies.

For many volunteers, this meant taking on strategic and managerial roles with the view that this would give them further employment opportunities down the line. And indeed, some have since spoken about how skills developed at this time have proved useful in work-related situations or future volunteering. London 2012 looks good on a CV.

Government figures released in 2013 showed the proportion of people who volunteered at least once a year rose from 65% in 2010 to 71% in 2012. This was to be expected: the enthusiasm and anticipation in the lead-up to a major event creates what experts term the “inspiration effect”. Figures from 2021, however, revealed a dramatic decline in volunteering in England compared with 2013/14.

In 2016, one of us (Niki), together with colleagues, did a survey of London 2012 volunteers to investigate whether the Olympics had inspired them to carry on volunteering. Of the 77 people spoken to, 44 said they had indeed carried on volunteering in other sporting events or in the community.

For others, however, their London 2012 experience was more complex. Some said they felt like just “another pair of hands”, or that London 2012’s organisers had not invested in proper training or role allocation that would meet their unique needs.

Notably, many reported not being aware of Join In, the official legacy organisation set up in May 2012 by the Department of Culture, Media and Sport to provide opportunities for former volunteers in local sports clubs and communities or at sporting events after the Games. (These opportunities were circulated within the Games Maker database via email, and were also posted on the official website.)

Although London 2012 promised a strong volunteer legacy, research suggests that those responsible for delivery prioritised the execution of the event itself as opposed to longer-term social development objectives. It is common for Olympic organisers to take their eye off the ball when it comes to different types of legacy, from funding post-Games regeneration projects and protecting affordable housing stock to skills development associated with the Games’ volunteering programmes.

One of the key problems is that London lacked the right governance plans to ensure that its promised legacies would remain a priority for the country, and thus have a long-term impact. Despite projects like Join In being set up, there wasn’t enough careful consideration of how Games Makers would take up post-Games opportunities, and no clear skills development programme to build on what they had gained from London 2012.

It could therefore be said that the inspiration effect Olympic planners had been angling for did not arise as a result of a coordinated effort by any official body – be that the London Organising Committee, the UK government, the local volunteer sector or any other institution. This is partly because legacy plans are often defunded after the Games’ closing ceremony.

Those responsible for planning London 2012 aimed to leverage the volunteer programme for community growth. Yet research reveals that some segments of the UK population (people of low income; ethnic minorities; people with disabilities) were underrepresented in the Games Maker workforce.

London 2012 volunteers were primarily white-British (80%) and employed full-time (50%). Just over a third were from London (34%), with a fifth from the south-east (21%) and a further 13% from the east of England. About 4% had a disability. Scotland and Wales, meanwhile, both contributed 2% of the volunteers.


This highlights that while the Olympics can be a useful one-off project to simulate short-term benefits, unless such an event’s goals are fully aligned with the host city and country’s long-term development strategies, much of the good work and momentum the event generates will be lost.

Volunteering has been shown to be a stepping stone to further volunteering, paid opportunities and getting people back into work. If the kind of hefty investment in mega-sport events that London 2012 required is sold to the public on the basis that it will result in this kind of wider community engagement, exactly how this is realised needs much more careful thought. Recruitment needs to be inclusive, people need better training – and crucially, legacy plans need to be funded and attended to.

Dr. Mike Duignan has previously received funding from the International Olympic Committee (IOC), but for a topic unrelated to this article. Mike is also the Director of the Observatory for Human Rights and Major Events which is the UK's official Olympic Studies Centre and affiliated to the IOC's academic Olympic Studies Centre. However, the nature of this relationship is academic with the view to disseminate good social science concerning how we can enhance the social and economic benefits of hosting the Olympic Games for the host country, city and its citizens. This article was based on work funded by 2020 Marie Skłodowska-Curie Actions, Research and Innovation grant agreement no. 823815.

Dr Niki Koutrou received funding from the Olympic Studies Centre of the International Olympic Committee to explore Athens 2004 Games volunteer legacies following on from her research in London 2012 Games volunteering. She has also been employed as Fleet Scheduler at the London 2012 Transport Functional area, where she closely worked with Games Makers.