Ukraine war: Russia’s invasion is an attempt to rewrite its own history 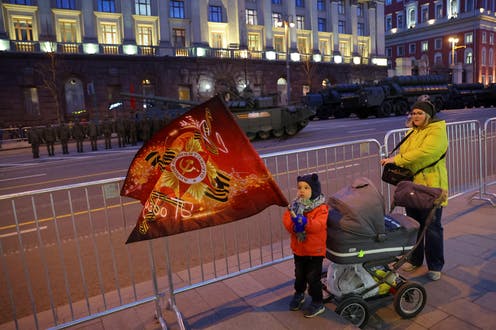 Vladimir Putin’s justifications for his country’s invasion of Ukraine – that is, legitimate anxiety at the erosion of Russia’s geopolitical security triggered by Nato’s expansion into eastern Europe – are looking increasingly wayward as the war enters its sixth month.

So it’s worth examining other factors that might be motivating the Russian president and his advisors. One of these was neatly summed up by historian Serhii Plokhy in his 2018 study, Lost Kingdom, A History of Russian Nationalism from Ivan the Great to Vladimir Putin:

Russia today has enormous difficulty in reconciling the mental maps of Russian ethnicity, culture, and identity with the political map of Russian Federation.

Most countries’ sense of collective consciousness depends on a certain degree of undisputed mythology that becomes widely accepted by the population as part of national history. But Russia, in its institutions and collective memories, is searching for that sense of certainty in its past, given it has lost the last great unifying idea of Soviet communism.

The consequences of this loss pose a direct challenge, feeding Russia’s existential insecurities that it has not been able to reconcile since the late Soviet and especially the post-Soviet times – a story about Russian victimisation and loss of national patrimony.

This is why Putin’s vision of Russia’s past clings to the idea of a ninth-century political entity known as the Kyivan Rus’, used by the president and his ideological allies as the anchor point for Russia’s nationhood.

Without it, Russia becomes a relatively young state, going back only as far as Ivan III, who came to the throne in the 1460s as the first monarch to assume the title of tsar (or emperor – even though this was never officially recognised). He was also the first to successfully challenge the nomadic Mongol Empire, under whose domination the Grand Duchy of Muscovy had found itself over the previous two centuries.

As such, Russia’s story – to counteract its political origins as a vassal state of the Golden Horde – must be retold through an encounter with another entity, Kyiv. But as we know, Kyiv is the capital of another state, Ukraine, which has its own history, collective trauma and national consciousness.

The net effect of this is historical incoherence, where multiple timelines and pasts compete for legitimacy – something the Kremlin has become masterful at exploiting. Hence, many of the most important historical memories – such as what is known in Russia as the “great patriotic war” (the second world war), are currently being marched out as some of the more outlandish justifications for the invasion of Ukraine. Once again, goes the Kremlin’s official line, Russia is fighting a new wave of fascism.

During the transition period of the post-Soviet years in the 1990s, there was still hope, that Russia would become more closely synchronised with modern, western liberal societies through free markets and investment. This was the soft power approach of “Wandel durch Handel” (change through trade) championed for two decades by the then German chancellor, Angela Merkel. But that change, or convergence never arrived.

How divergent the worldviews between the east and west have once again become was clearly visible in Russia’s Victory Day celebrations in May. This year, five year-old children were dressed up as tanks with the now infamous pro-war Z symbol painted on the front. They were chaperoned by their teachers who wore second world war-era uniforms.

Russia, as Kevin Platt, a specialist in Russia and eastern Europe, writes in the 2020 book, Power and Time, has an uncanny “ability to reach past boundaries of the present to lay claim to any element of the historical record”. This is how post-Soviet nostalgia is now mixed up with the rehabilitation of the Stalin era and his apparently single-handed defeat of Nazism. This is underpinned by the sacred mission of Russia as the heir of Kyivan Rus’, and through it the whole Byzantine, Orthodox Christian civilisation.

Two years into Putin’s first presidency, Russian director Aleksander Sokurov introduced the world to the cinematic version of Russia’s sense of history in the Russian Ark. The film is a continuous 90-minute one-take shot with no cuts or edits, recorded on a single day in the famous Hermitage art gallery.

The key to understanding Russia is this sense of curated continuity that persists by joining together various foreign elements – like an art exhibit that keeps travelling through time. “Our past hasn’t become past yet,” mused Sokurov in an interview about the project. “The main problem of this country is that we don’t know when it will become past.”

Russia is trying to forge a new past for itself on the battlefield in Ukraine. This is something akin to the process of what in mineralogy is known as pseudomorphosis – a false form – as was already observed in the 1920s in connection with Russia by German philosopher Oswald Spengler. Pseudomorphosis is where new contents fill out the old frames, forming entities “whose inner structure contradicts their external shape”, as Spengler writes in the Decline of the West:

I call historical pseudomorphosis those cases where an older alien culture lies so massively over the land that a young culture, born in this land, cannot get its breath and fails not only to achieve pure and specific expression-forms, but even to develop fully its own self-consciousness.

You would be hard pressed to find a better description of the current situation in Ukraine, where Russia is trying to impose its reading of the past on to another country’s present.

2022-07-28
Previous Post: Why the London 2012 Olympics had limited impact on volunteering across the UK
Next Post: Shawn Mendes cancels world tour to prioritise mental health