By: WMN
In: Politics, Sport 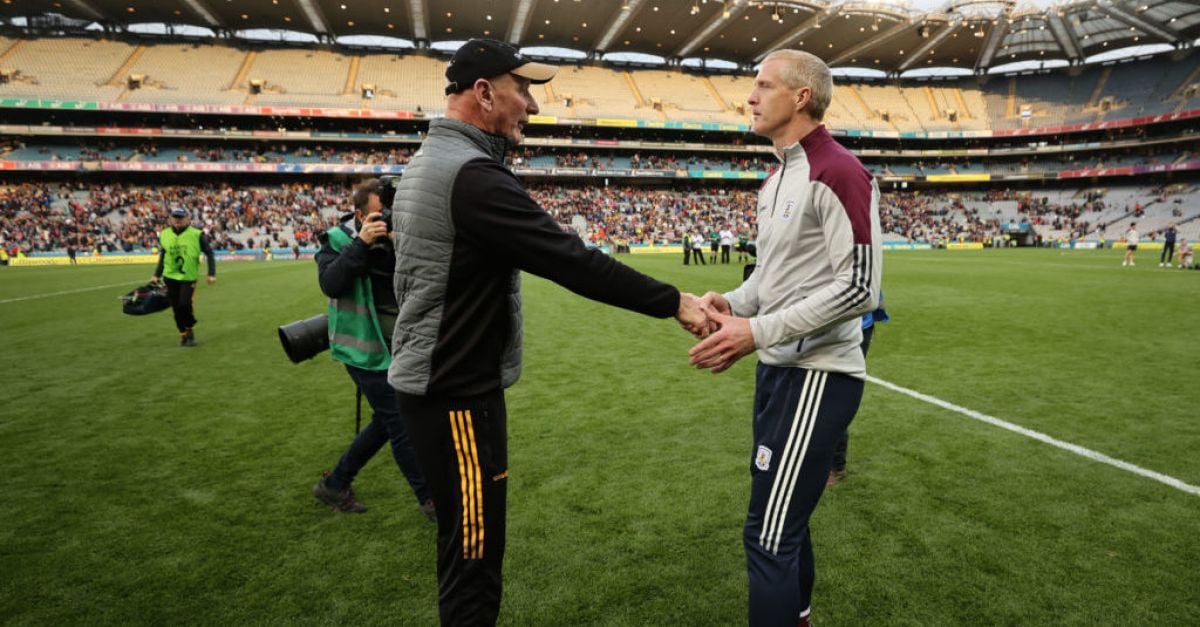 Former star Kilkenny player Henry Shefflin has led tributes to Brian Cody after he stepped down as Kilkenny senior hurling manager this afternoon.

In his 24-year tenure, Cody led the Cats to 11 All-Ireland titles, 18 Leinster championship titles and 10 National League titles, with Shefflin on his team for many of the wins.

Current Galway manager Shefflin, whose relationship with Cody has come in for scrutiny in recent times with on-pitch handshakes between the pair perceived as “frosty”, nonetheless offered his “best wishes” to Cody on his retirement.

“End of an era, memories which will be treasured forever,” he said in a tweet.

End of an Era, Memories which will be treasured forever. Best wishes Brian. https://t.co/FeLxuWBVcE

“One of the very very lucky ones to have witnessed Brian Cody up close in action,” Tyrrell tweeted. “His passion and love for Kilkenny hurling is unparalleled. Honoured to have been managed by the greatest manager ever.”

“There aren’t enough words to do the man justice,” Brennan tweeted. “I got to live a dream & play for Kilkenny.”

Larkin simply tweeted: “Brian Cody. Where do you want your statue ???”

A statement on behalf of James Stephens. Everyone in the club is so grateful for the years of service Brian Cody has given to club and county. pic.twitter.com/uyIjStt3PD

The 68-year-old called time on his Cats career after leading his side to another All-Ireland decider last weekend which they lost to Limerick.

His opposing manager on the day was John Kiely, who on Saturday described Cody’s success as “unparalleled”.

“An iconic figure in Gaelic Games for the last quarter of a century in his role as manager and before that as a player as well, so he has had unprecedented success, unparalleled and probably never to be equalled,” he told Newstalk radio.

“It’s staggering to think that almost a third of the 36 Senior All-Irelands won by this great county have come under Brian’s stewardship,” the club said in a statement.

“His single-minded determination fostered a ‘never say die’ attitude in all his teams that saw them over the line in many a tight battle over his 24 years in charge.”

Best wishes Brian Cody on your retirement, and thanks for your incredible contribution to hurling.

An outstanding player and manager with @KilkennyCLG.

You brought hurling to new heights, great joy and happiness to many, as well as some heartbreak to others!

Taoiseach Micheál Martin was also among those to pay tribute, saying Cody had “brought hurling to new heights”.

“Best wishes Brian Cody on your retirement, and thanks for your incredible contribution to hurling,” he tweeted.

“An outstanding player and manager with @KilkennyCLG. You brought hurling to new heights, great joy and happiness to many, as well as some heartbreak to others!”

Announcing Cody’s retirement earlier on Saturday, the Kilkenny County Board thanked him for his “commitment and passion” and called him the “greatest manager in the history of hurling.”