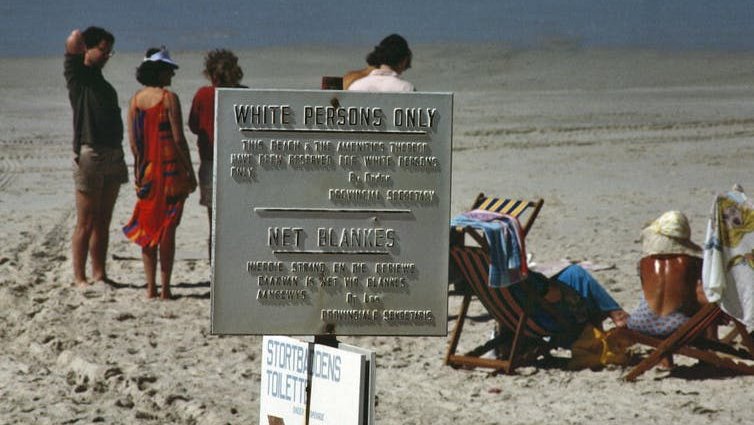 Whiteness is a modern, colonial invention. It was devised in the 17th century and used to provide the logic for genocide and slavery. The first recorded mention of “white people”, historians concur, is in English playwright Thomas Middleton’s 1613 play, The Triumphs of Truth.

Ever since the 17th century, people across the world – from the Dominican Republic and Morocco to India and New Zealand – have been variously granted or denied rights on the basis of being deemed white or non-white. Whiteness thus has consistently entailed opposition, power and subjugation.

Research shows that this theme of whiteness as power and unity has persisted even as the boundaries of whiteness have shifted.

As European powers colonised various parts of the world, they implemented and refined racial categories. In colonial Barbados, 17th-century labour codes described indentured Europeans as “white” and gave them more rights than enslaved Africans on that basis. This ensured that the two groups would not unite in rebellion against wealthy planters. As African American studies expert Edward B Rugemer has argued, this also “codified racial distinction as a tool of mastery” and was replicated in Jamaica and South Carolina. Crucially, it hinged on the fact that enslaved Black people had no legally recognised rights, whereas European-born white servants did. Slave status was for life, without recourse, and heritable.

In other Caribbean and Latin American colonies, the term “white” gradually replaced the term “Christian” as the designation for European settlers. In Haiti, French colonial officials grouped people into an array of categories that conflated race and class: “grands blancs” (big whites), “petits blancs” (little whites), “free coloureds”, and “slaves”, with the overarching distinction being between whites and non-whites.

Spanish and Portuguese colonisers in Latin America, meanwhile, developed the intricate and rigid casta system. At the top of this caste-based hierarchy were peninsular Spaniards (people from the Iberian peninsula), and at the bottom, enslaved Africans.

Whiteness as a political tool

What has made whiteness such an enduringly powerful tool is its “nonsense logic”, as writer Robert P Baird recently put it – how ill-defined it is as a label. It can, and has been, defined in whatever way best serves to consolidate power for the ruling group.

Echoing the division between enslaved people and indentured servants centuries earlier, working-class people in the 20th century were pitted against one another by appeals to whiteness.

In his 1995 book, How the Irish Became White, American historian Noel Ignatiev looks at 19th-century Irish immigration to the US. He details how these working-class newcomers emphasised their distance from Black labourers, thereby laying claim to whiteness.

As a radical socialist, he questions why they effectively sided with the oppressor (white Americans), rather than with the oppressed (Black enslaved people). “Imagine how history might have been different had the Irish, the unskilled labour force of the north, and the slaves, the unskilled labour force of the South, been unified. I hoped that understanding why that didn’t happen in the past might open up new possibilities next time,” he later explained.

When whiteness is used to enact violence

However, as much as whiteness enables power, it also fuels anxiety. Because the category is at once ill-defined but also bestows great power, people who find themselves in that category have consistently been at great pains to protect it. Historically, and still today, in the minds of many of those who stand most to benefit from it, whiteness must be kept “pure”.

Thus, colonial officials in the British Empire treated white settlers as citizens with rights, but Indigenous and enslaved people as threats to be suppressed and controlled.

For centuries, universities and schools across Europe formalised the notion of white supremacy through knowledge production and dissemination. The Swedish botanist Carl Linnaeus taught that every living being could be categorised and classified into types. The German naturalist Johann Friedrich Blumenbach claimed that human beings were divided into five “scientific” races based on skull shape with the “Caucasian” skull described as “the most handsome and becoming”.

In India, in the heyday of scientific racism, colonial scientists argued that ethnicity and caste were physical attributes, assigning hierarchical status and privileging proximity to whiteness. And as scientific racism became mainstream, whiteness was naturalised and framed as “common sense” for generations of students.

Even more sinister were the political and social programmes that whiteness justified: eugenics, forced sterilisation, and genocide. In the 20th century, the humanities and social sciences, too, were agents of white supremacy. Sociology sought to explain modernity by universalising the experiences of European and North American societies, while either depicting African and Asian societies as “primitive” or writing them out of history.

This stands in contrast to the way in which non-white and Black people are collectively othered and racialised. And it continues to have tangible, and often terrible, daily consequences.

Universities and schools impose white-centric curriculums and uniform policies that discriminate against Black pupils. Officers overpolice Black communities in the name of law and order. Authorities adultify Black children, which leads to their being treated as criminals.

In each case, whiteness enacts violence without being spoken. By remembering the history of whiteness, however, we might begin to address the legacies of empire and slavery.

Meghan Tinsley does not work for, consult, own shares in or receive funding from any company or organization that would benefit from this article, and has disclosed no relevant affiliations beyond their academic appointment.

2022-07-14
Previous Post: How Arsenal could line up with new midfield partnership as targets revealed
Next Post: Gossip has long been misunderstood – here’s how it can help your work and social life