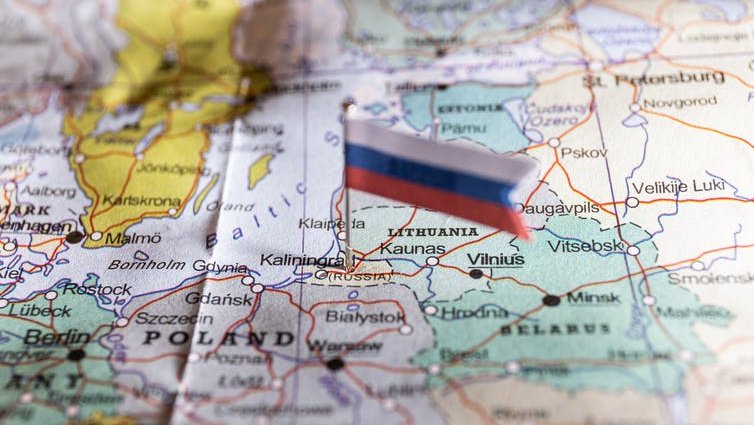 Tensions between Russia and Nato, already stretched considerably by the invasion of Ukraine, have ratcheted up even further over Kaliningrad, a small piece of Russian territory sandwiched between Poland and Lithuania on the Baltic coast and cut off from mainland Russia.

Kaliningrad is a Russian oblast (region), of just under half a million people on the Baltic sea. It sits between Lithuania to its north and east and Poland to its south and is about 1,300km from Moscow. It was claimed by the Soviet Union from Germany after the second world war and has been controlled by Moscow ever since.


When the sixth round of EU sanctions on Russia came into effect on June 17, Lithuania announced that sanctioned Russian goods to Kaliningrad would be banned from transit through Lithuania. The sanctions affect oil and refined oil products, and any technology that could be used for military purposes. Other products on the list were cement, construction materials and metal goods.

The decision jeopardises an agreement signed in April 2003 between the EU and Russia which allowed people and goods from Kaliningrad to obtain a transit document for train travel across Lithuania to Russia. The EU’s high representative for foreign affairs and security policy, Josep Borell, backed the decision, saying that Lithuania was correctly implementing EU sanctions.

Moscow reacted immediately and strongly, threatening “serious consequences”, which, as yet, have not been specified.

On June 20, Lithuania’s chargé d’affaires was summoned to the Foreign Ministry and told to cancel the restrictions or face the consequences. A senator on Russia’s upper house – the Federation Council – Andrey Klimov, called on the EU to “correct Vilnius’s impudent little stunt”, while the head of Russia’s Security Council, Nikolai Patrushev, stated that “appropriate measures” that would have a “serious negative impact on the population of Lithuania”.

The heightened tensions between Vilnius and Moscow follow hot on the heels of a discussion in Russia’s State Duma on June 8 – the lower house of parliament – about revoking the Soviet Union’s recognition of Lithuania’s independence. By making a stand over transiting goods to Kaliningrad, Lithuania is also highlighting its sovereignty.

Threat in the Baltic

The deteriorating relationship between Russia and the west after the former’s invasion of the Donbas in 2014 saw Russia deploy short-range Iskander missiles in Kaliningrad in 2016 that could reach the Baltic State capitals and two-thirds of Poland. In April 2022, the Russian Baltic Sea Fleet air force ran simulated bombing campaignsin Kaliningrad. With more than 1,000 personnel – and at a time of heightened conflict over Ukraine – this was a big concern for Vilnius.

On June 22, the Russian military simulated missile attacks on Estonia with the Baltic Sea Fleet heavily involved and helicopters violating Estonian airspace. Understandably, the Lithuanian authorities fear being cut off.

The Suwałki gap is a stretch of land 100 kilometres long stretching along the Lithuanian and Polish border dividing Belarus from Kaliningrad. The Suwałki gap has long been Nato’s weak point as Russia could quickly isolate the Baltic States. Although still an unlikely prospect this would be Nato’s weakest point. So Russian military drills in Kaliningrad are viewed with alarm in Vilnius.

And, while Lithuania has the smallest Russian minority in the Baltic States, Moscow’s propaganda makes much of the ethnic Russian population in a similar way to its insistence that Crimea and the Donbas region are intimately tied through cultural and linguistic links to the Russian “motherland”.

So the ban on the transit of certain goods to Kaliningrad represents an important stand by Lithuania against Russia. While the original ban was on the transit of sanctioned goods by train, Vilnius extended the ban to goods moved by lorry on June 21.

There is little Russia can do as it is unlikely to attack a Nato member. Russian flights were banned from EU airspace three days after invading Ukraine and shipping companies quickly stopped working in Russian ports. Russia will be left looking for available domestic shipping, which could take months.

Read more:
Ukraine war: as the conflict at sea intensifies, Russia’s prospects of victory look further off than ever


For Lithuania, it is a calculated risk. Since mid-2021 Lithuania no longer directly relies on Russia for energy, having connected to the European power grid. Therefore, it is a targeted action by Lithuania that leaves Russia with little scope for action.

Well before the Russian invasion – in July 2021 – Lithuania called for Ukraine to be given Nato membership. It has repeated this call since the conflict started in February. Lithuania was also among the first EU states to request that Brussels provide funding for Ukrainian refugees. Lithuania has been a principal advocate for Ukraine becoming an EU member and campaigned for Brussels to begin talks to facilitate that move.

The Russian government has called Lithuania’s actions a “blockade”. But people and unsanctioned goods can still transit across Lithuania and people from Kaliningrad can still enter Poland and Lithuania without a visa.

Reflecting Russia’s often surreal worldview, the authorities claim that it is illegal by international law to blockade Kaliningrad. But if it’s really a blockade, it’s a poor one – and Moscow knows all about blockades, having cut off Ukrainian ports, causing the current global food crisis. Lithuania has yet again shown that it is prepared to stand up to autocrats.

Stephen Hall does not work for, consult, own shares in or receive funding from any company or organisation that would benefit from this article, and has disclosed no relevant affiliations beyond their academic appointment.

2022-06-24
Previous Post: Why UK approach to replacing the Human Rights Act is just as worrying as the replacement itself
Next Post: PhD: High Performance Electrical Insulation Coatings for Next Generation Additively Manufactured Electrical Machines at University of Bristol