Building muscle: slowing down the tempo of your workout won’t help you get stronger faster – but it may still have benefits 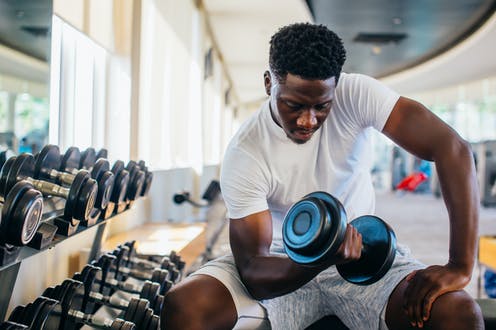 Everyone wants to get fit, but many of us lack the time or patience required to get results – especially if our goal is to build a more muscular physique. While there’s plenty of advice online telling people about the best ways to do this, not all of the information is trustworthy or backed by evidence. One suggestion often made by fitness enthusiasts is a training method called “time under tension”. This is the idea that slowing down the pace of your exercises – such as your squat or bicep curls – is the secret to helping you get stronger faster.

Put simply, time under tension refers to the length of time a muscle is working during a certain exercise. For example, if you were doing a push up, you might aim to take two seconds on the way down, then two seconds as you push back up from the ground – meaning you’re keeping the muscle under more tension (theoretically making it work harder) than if you were to rush through your push ups. So if you did ten push ups, it would take you around 40 seconds to complete a set.

Advocates of time under tension claim that by maintaining longer periods of muscle tension – usually 40 to 60 seconds per set – you’re more likely to experience muscle growth. It sounds great in theory, but in practice it’s not that straightforward.

In order to build muscle, training volume is the most important factor. This refers to the overall amount of weight lifted throughout the workout. So for example, if you do four sets of a barbell squat, and perform eight repetitions each set lifting 100kg, your overall training volume for that exercise would be 3,200kg. However, the number of muscle fibres we recruit during an exercise (which depends on the amount of force needed to perform an exercise or lift a weight) is also important.

Blood flow also plays an important role in muscle growth. As our muscles contract during a resistance training exercise, the blood vessels that feed the working muscles become compressed. This reduces circulation to the muscle, temporarily preventing enough oxygen from reaching the muscle (known as hypoxia). Although we’re not clear on the reasons why, we do know that hypoxia leads to increased muscle growth, and that exercises with prolonged time under tension reduce blood supply to muscles for longer periods of time. This is why many people believe that longer time under tension will lead to greater muscle growth.

However, the research tells a different story.

Studies have repeatedly found that slowing down the tempo of a lift or movement has no more benefit for building muscle than lifting at a regular or even fast pace. This is true whether the workout is for the whole body, based on compound lifts (exercises that engage multiple muscle groups at once, such as a back squat), or using resistance machines.

In fact, some research has even suggested that while no difference in muscle growth is achieved at slower speeds, muscle fibre activation, overall training volume and even strength gains are all lower in people who train at a slower – rather than their natural – tempo.

Our muscles are comprised of different types of muscle fibres. One type are slow-twitch muscle fibres (known as type I fibres), which are important for endurance as they don’t fatigue as quickly as other muscle fibres. This makes them essential for activities such as long runs or bike rides, high rep sets, or isometric holds (such as the plank).

Short durations of exercise with very heavy weights are unlikely to make our slow-twitch muscle fibres tired. But research shows that time under tension may help us better develop these important muscle fibres.

Of course, many of us aren’t highly experienced weightlifters or bodybuilders but time under tension may still be beneficial to us – and can also be a great place for people to start, especially if they haven’t lifted heavy weights before. In fact, in clinical exercise settings we use time under tension as a way of reinforcing good technique. This helps reduce the risk of injury and helps people learn how to optimally recruit their muscles.

All in all, there’s no real “hack” to building muscle, despite what proponents of time under tension may claim. If you want to build muscle, it requires consistency, proper nutrition, and trying to challenge yourself each workout by doing a bit more or lifting a bit heavier.

Jack McNamara does not work for, consult, own shares in or receive funding from any company or organisation that would benefit from this article, and has disclosed no relevant affiliations beyond their academic appointment.