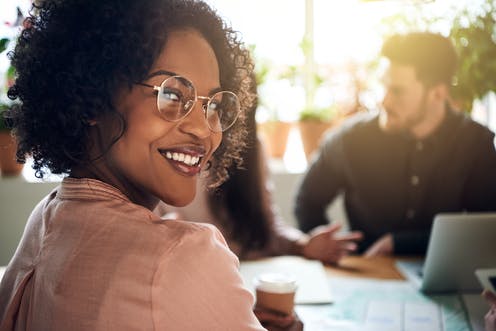 Diversity and inclusion initiatives are supposed to make a workplace more equal and welcoming. But not everyone agrees on quite what that looks like or whether it’s important. Indeed, some people can be dismissive or even opposed to the idea.

Let’s be clear: people from marginalised groups shouldn’t have to engage in debates about their dignity or worth, as some would have them do. But on other more general issues like inclusion or positive action initiatives, people can act resistant or dismissive if they don’t understand the concepts being used or aren’t clear on what an initiative is for. It’s what workplace psychologists term “diversity resistance”.

Having as many people as possible take part in inclusion efforts really helps to actually make progress. So at least trying to have a conversation is important. And even if that person isn’t convinced, you may be helping onlookers to understand. Here are five steps that can help you get started.

Approaching someone about diversity can seem confrontational. It’s also easy to get angry when someone appears to be threatening or belittling.

So before you don your armour and grab your sword, try to take a moment to cool down. As Lemony Snicket says, “If everyone fought fire with fire, the whole world would go up in smoke.” Instead, approach the conversation with curiosity. You can learn from this person in the same way that they can learn from you.

There’s a limit to this of course. You should never have to put up with harassment or a hostile working environment, even if it is ostensibly framed as someone’s lack of understanding or “just playing devil’s advocate”. Some will never get on board, and you should work out when to stop engaging, if necessary. There’s also a balance to be struck between talking about inclusion and actually taking action.

Research shows that we often depend on scripts for social situations, especially those that are potentially tense, emotional or confrontational. Think of how we use certain stock phrases at funerals, for example, to avoid saying the wrong thing.

To keep the conversation on track, and to stick to step one, it can be useful to have a script ready, before you engage. Set out your stall and the reason for the conversation. Try to avoid phrasing that makes it seem aggressive or confrontational. The words you use will be best chosen by you as befitting your style and context, but it’s worth taking the time to consider them carefully before you speak.

Before you engage, try to work out why the other person is reacting negatively. Is it “reactance”? Psychology scholars use this term to describe the uncomfortable feelings, and subsequent negative reactions, that may arise when someone feels (correctly or incorrectly) that their free will is somehow being curbed.

Reactance has been used, for example, to explain the resistance to wearing a face-mask. Similarly, someone might react negatively to an inclusion initiative – particularly if it is something like mandatory unconscious bias training – if they feel that they feel that they are losing autonomy.

Or is it fragility? Fragility relates to the negative reactions (anger, fear and guilt) and behaviours (arguing, deliberate silence, or exiting the conversation) one has when confronted with issues of discrimination or privilege. Discussions and initiatives concerning racial diversity and inclusion, for example, often trigger “white fragility”.

Many people don’t want to openly criticise an inclusion initiative publicly (at an all-staff meeting, for example). They might however mutter about it among their team or close colleagues.

This could be because they think that it will be ineffective. They may be right. We often don’t know how effective an inclusion initiative will be. Maybe their experience of the organisation or technical insight could be useful here. That could be one way of getting them to join the conversation, even if they don’t necessarily understand all of the background concepts or topics in depth.

It could also be that they don’t see the point or importance of the initiative. In this case, a one-to-one conversation that allows the person to openly question the concept or initiative may be useful. You might be the right person to initiate that conversation. Or, if you aren’t, think about who might be.

5. Acknowledge that you don’t know everything

No one knows everything. I’ve researched equality, diversity and inclusion for over a decade and I still benefit greatly from the insights my students, co-authors and colleagues share. Inclusion is a complex and constantly evolving topic.

Acknowledging your own ignorance drops the temperature. You go from a teacher-and-student dynamic to two people trying to figure things out together. Share what you do know. Signpost to resources from those with that lived experience. And listen.

The person you’re talking with might also give you insight into what they’re thinking, their experiences, or how they arrived at their current thinking. These are all important things to know for future conversations. And the hope, really, is that you will keep talking.

Ciarán McFadden has previously received funding from the Irish Research Council, the Fulbright Ireland Commission, and the Carnegie Trust.

2022-05-30
Previous Post: Man who began raping and sexually assaulting his five sisters when he was 10 years old is jailed
Next Post: Liverpool CEO Billy Hogan ‘in complete disbelief’ by French sports minister claims and demands apology after final chaos