‘You can’t even talk English, so don’t talk!’ How linguistic racism impacts immigrants in the UK 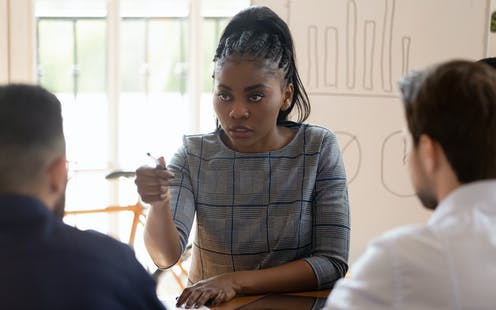 When Holan Liang was 17, she spent her holidays working at her father’s computer parts company. In her recent book, A Sense of Belonging: How to Find Your Way in a Fractured World, Liang, now a psychiatrist, recounts the racist ways in which customers would respond to her family’s Chinese roots.

Her father, who had a PhD in hydraulic engineering, was called “a useless Chinaman” who “can’t speak a bloody word of English”. Liang points out that he actually could speak fluent English, but did so with an accent and some grammatical errors because English was his second language.

What Liang’s family experienced – discrimination due to accent, dialect or speech patterns – is called linguistic racism or linguicism. It is directed at people who speak in ways considered to be non-standard or “foreign-sounding”. It is not based on the proficiency or intelligibility of a language speaker, but rather on their accent and verbal delivery.

Accentism sees people suffer comments and ridicule for regional accents and dialects. But as an extension of racism, linguistic racism in the UK centres whiteness by deeming any so-called non-standard ways of speaking English to be abnormal and inferior.

Our respective doctoral research projects, which focus on Zimbabwean and South Asian communities in the UK, show that bilingual immigrants suffer from linguistic racism, due to their English accents being influenced by their mother tongue and the community’s particular speech patterns.

We have found that this discrimination can affect their access to education, employment and social opportunities. It also impacts their self-esteem, resilience and efficacy.

Christine researches young people within the Zimbabwean community, who have reported experiencing playground bullying, mocking and exclusion from peer social groups at school, due to linguistic racism. “At the beginning, it was rough,” one participant in the research said. “I had a different accent to everyone else and hadn’t caught the London accent so people would try to pick on me, and no-one wanted to hang out with me.”

Young people described how linguistic racism impacted their self-esteem and sense of belonging, leading some to become ashamed of their ethnic identity. For some this in turn affected their relationships with their parents, often due to resentment of their heavy foreign accents.

One girl said of her mother, “When she does talk English, her accent is annoying. You know like, a person’s who’s got a really strong Zimbabwean accent, trying to talk in English? It annoys me, actually aggravates me. I don’t even want her to talk to my friends, because she’s embarrassing, because she just tries to talk and be all normal with them, in English, and it’s just like ‘Mum, you can’t even talk English, so don’t talk!’”

Other participants said they would avoid being seen in public with their parents or try to prevent them attending school events.

Zanib has interviewed south Asian-heritage Muslim women at Apna Haq, a Rotherham-based charity. Most of the women reported facing accent-based microaggressions daily, despite many being proficient English speakers, born and raised in the UK.

One interviewee reported an incident in a library, where a stranger mockingly shouted out, “You talk Bud-Bud English!” “Bud-Bud” is a derogatory term that supposedly mimics south Asian accents.

This type of interaction led the women to experience feelings of deep shame and a loss of confidence in speaking English publicly. This limited their engagement with social and professional opportunities.

In 2020, sociolinguists at Queen Mary University of London conducted research into the effect of accentism and linguistic racism in job recruitment. They found that this discrimination affects interviewer perceptions of candidate suitability for particular occupations.

They also found that candidates’ success at interview was disproportionately lower the further their accents were from received pronunciation, regardless of how strong their qualifications, skills or interview proficiency were. This mainly affected non-white candidates.

France set a positive example in 2020, when it passed a ground-breaking law banning what French sociolinguist Philippe Blanchet terms “glottophobie”, racism based on regional or foreign accent. The new law attracts a maximum penalty of three years’ imprisonment and €45,000 fine.

Unfortunately, in the UK, there is little clarity on linguistic racism within the Equalities Act (2010), and therefore no real protection. Unchallenged, linguicism endures as a pretext for perpetuating racism under the radar.

Christine Makuve does not work for, consult, own shares in or receive funding from any company or organisation that would benefit from this article, and has disclosed no relevant affiliations beyond their academic appointment.

2022-05-16
Previous Post: Do these three popular anti-ageing skincare ingredients work? Here’s what the evidence says
Next Post: What’s the Deal With Synesthesia TikTok?