BOSTON CELTICS host the Milwaukee Bucks on Sunday evening in a crucial Game 7 with a place in the NBA’s Eastern Conference Finals on the line.

The reigning champion Bucks had the chance to sew up the series at home on Friday night, but succumbed 108-95 to the brilliance of Jayson Tatum.

The Greek Freak could hardly have done more to try and will his side to victory in Game Six, dropping a mammoth 44 points, 20 rebounds and six assists in 41 minutes.

But when Mike Budenholzer’s men, minus injured All-Star Khris Middleton, threatened to make a fourth quarter comeback, at one point cutting the deficit to just four points – Tatum took control of proceedings.

The 24-year-old logged an incredible 46 points on the way to victory – including 16 in an imperious fourth quarter display. 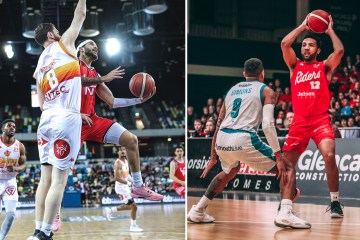 After the game, the Duke alum said: “It means everything.

“The best atmosphere in the NBA. Game 7s are the biggest and best games. Looking forward to it, truly.

“Its basketball’s biggest moments, biggest stage. What it boils down to is now go out there and just have fun.”

Tatum was backed up by 22 points from sidekick Jaylen Brown, as well as 21 points from recently crowned Defensive Player of the Year Marcus Smart.

Most read in Other Sports

Giannis, meanwhile, was let down by his supporting cast – with Jrue Holiday only managing 17 points and Pat Connaughton the Bucks’ next top scorer on 14.

On Tatum’s outstanding performance, Smart said: “That’s why he gets paid the big bucks for moments like that.

Lying in wait for the winner is the No1 seed Miami Heat.

Erik Spoelstra’s side have enjoyed the weekend off, after seeing off Joel Embiid and the Philadelphia 76ers in six earlier this week.