Is AI-generated art really creative? It depends on the presentation 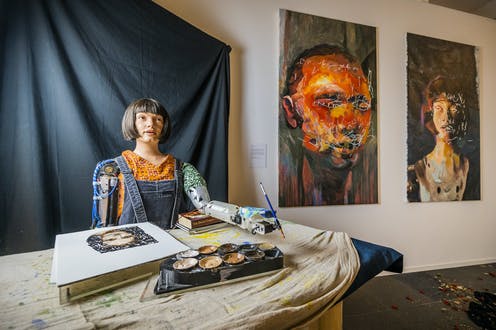 Ai-Da sits behind a desk, paintbrush in hand. She looks up at the person posing for her, and then back down as she dabs another blob of paint onto the canvas. A lifelike portrait is taking shape. If you didn’t know a robot produced it, this portrait could pass as the work of a human artist.

Ai-Da is touted as the “first robot to paint like an artist”, and an exhibition of her work called Leaping into the Metaverse opened at the Venice Biennale.

Ai-Da produces portraits of sitting subjects using a robotic hand attached to her lifelike feminine figure. She’s also able to talk, giving detailed answers to questions about her artistic process and attitudes towards technology. She even gave a TEDx talk about “The Intersection of Art and AI” (artificial intelligence) in Oxford a few years ago. While the words she speaks are programmed, Ai-Da’s creators have also been experimenting with having her write and perform her own poetry.

But how are we to interpret Ai-Da’s output? Should we consider her paintings and poetry original or creative? Are these works actually art?

What discussions about AI and creativity often overlook is the fact that creativity is not an absolute quality that can be defined, measured and reproduced objectively. When we describe an object – for instance, a child’s drawing – as being creative, we project our own assumptions about culture onto it.

Indeed, art never exists in isolation. It always needs someone to give it “art” status. And the criteria for whether you think something is art is informed by both your individual expectations and broader cultural conceptions.

If we extend this line of thinking to AI, it follows that no AI application or robot can objectively be “creative”. It is always us – humans – who decide if what AI has created is art.

In our recent research, we propose the concept of the “Lovelace effect” to refer to when and how machines such as robots and AI are seen as original and creative. The Lovelace effect – named after the 19th century mathematician often called the first computer programmer, Ada Lovelace – shifts the focus from the technological capabilities of machines to the reactions and perceptions of those machines by humans.

The programmer of an AI application or the designer of a robot does not just use technical means to make the public see their machine as creative. This also happens through presentation: how, where and why we interact with a technology; how we talk about that technology; and where we feel that technology fits in our personal and cultural contexts.

In the eye of the beholder

Our reception of Ai-Da is, in fact, informed by various cues that suggest her “human” and “artist” status. For example, Ai-Da’s robotic figure looks much like a human – she’s even called a “she”, with a feminine-sounding name that not-so-subtly suggests an Ada Lovelace influence.

This femininity is further asserted by the blunt bob that frames her face (although she has sported some other funky hairstyles in the past), perfectly preened eyebrows and painted lips. Indeed, Ai-Da looks much like the quirky title character of the 2001 film Amélie. This is a woman we have seen before, either in film or our everyday lives.

Ai-Da also wears conventionally “artsy” clothing, including overalls, mixed fabric patterns and eccentric cuts. In these outfits, she produces paintings that look like a human could have made them, and which are sometimes framed and displayed among human work.

We also talk about her as we would a human artist. An article in the Guardian, for example, gives a shout-out to “the world premier of her solo exhibition at the 2022 Venice Biennale”. If we didn’t know that Ai-Da was a robot, we could easily be led to appreciate her work as we would that of any other artist.

Some may see robot-produced paintings as coming from creative computers, while others may be more sceptical, given the fact that robots act on clear human instructions. In any case, attributions of creativity never depend on technical configurations alone – no computer is objectively creative. Rather, attributions of computational creativity are largely inspired by contexts of reception. In other words, beauty really is in the eye of the beholder.

As the Lovelace effect shows, through particular social cues, audiences are prompted to think about output as art, systems as artists, and computers as creative. Just like the frames around Ai-Da’s paintings, the frames we use to talk about AI output indicate whether or not what we are looking at can be called art. But, as with any piece of art, your appreciation of AI output ultimately depends on your own interpretation.