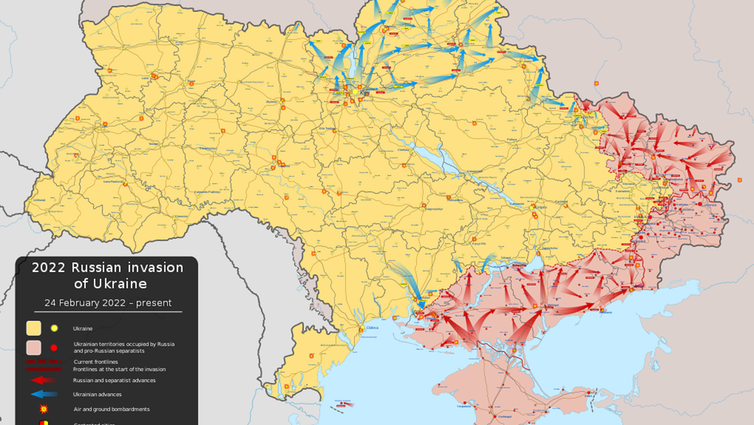 Russians gathered on May 9 for the annual Victory Day celebrations, a hugely symbolic commemoration of Nazism’s defeat in the second world war. Elsewhere in the world, there is general agreement that Russia’s military has so far failed to achieve the strategic territorial gains that would have allowed Vladimir Putin to declare Moscow’s war aims achieved in time for the event. And so denied the opportunity to declare his own victory in Ukraine, Putin merely repeated a version of his worn-out diatribe against Nato and the west in his speech on Mosocow’s Red Square.

But Moscow’s climb-down began long before. Having failed to take Kyiv and to force a Ukrainian surrender in the first days and weeks of the invasion, Moscow announced slightly more modest, albeit not necessarily more achievable, goals for the second stage of its aggression against Ukraine in April.


In the course of this second stage of the war, Russia hopes to establish full control over Donbas and southern Ukraine, including Odesa, and consolidate a land corridor to Moldova’s breakaway region of Transnistria. This is reminiscent of the Novorossiya project pushed by the Kremlin briefly in 2014 to justify Russian territorial claims to southern Ukraine and Crimea. It is based on the historically dubious claim that these areas, conquered by the tsarist Russian Empire in several 18th-century wars with the Ottoman Empire, have always been Russian and should therefore be a part of modern-day Russia.

Little progress has been made in this regard so far. Russia has achieved some initial territorial gains to the north of Luhansk, but has been pushed back around Kharkiv. Similarly – and also dating to the early days of the invasion – Russia captured much of the Kherson region but had to abandon plans for a referendum there, initially scheduled for April 27, and is struggling with the introduction of the Russian rouble.

Similarly, about half of the Zaporizhzhia region, including the capital after which it is named, remains in Ukrainian hands. Russian forces have not been able to advance towards Mykolaiv, the capital of the neighbouring region of the same name, either and have, in fact, been pushed further away from this strategic city by a Ukrainian counteroffensive. Nor has the Kremlin been able to take all of Mariupol, where Ukrainian defenders are still frustrating Russian efforts amid a humanitarian catastrophe.

While the Russian offensive in eastern and southern Ukraine has stalled, it has not ended. Russian forces have made small gains around Izyum and Popasna since the war effort was redirected to Donbas, and there remains a danger that Ukrainian forces will be encircled in the government-controlled areas of Ukraine’s Donetsk and Luhansk regions.

Russia: from offence to defence?

But Russia’s incremental gains have come at significant cost in terms of personnel and material, both of which are increasingly difficult to replace because of a lack of available combat-ready troops and western sanctions, which make production and repair of new equipment more difficult. But the continuation of heavy fighting in Donbas and of long-range attacks on major population centres and critical infrastructure in central and western Ukraine indicate that Moscow retains significant combat capabilities and is willing to bring them to bear.

The highly determined and successful Ukrainian defence efforts, supported by western military aid to Kyiv and simultaneously increasing economic pressure on Moscow, raise the question of how long Russia will invest in an unjustifiable aggression that is more and more difficult to sustain and lacks any sign of tangible progress. Over time, therefore, a war of attrition is more and more likely. As Russia “switches” to defence, it will entrench itself firmly in the territories it holds by then, and, in a reversal of the current situation, Ukraine will find it hard to push Russian forces back much further.

Negotiations on the horizon?

Ukraine’s western allies, meanwhile, have pushed increasingly ambitious war aims. This includes US defense secretary Lloyd Austin saying that Russia should be weakened “to the degree that it can’t do the kinds of things that it has done in invading Ukraine”. UK foreign secretary Liz Truss, meanwhile, has demanded that Russia be pushed out of Ukraine completely.

This goes beyond Ukrainian president Volodymyr Zelensky’s minimum goals in any negotiations: that Russia withdraw beyond the front lines as they existed prior to the start of the invasion on February 24, 2022. But Zelensky has also made it clear that a precondition for Ukraine entering into negotiations was the successful evacuation of civilians (which has now been completed) and fighters from the besieged Azovstal steelworks in Mariupol.

There are, as yet, no signs that the war will end with anything but a negotiated deal. To assume otherwise would be to overestimate the potential for pushing Russia out of Ukraine and underestimate the human and material cost and time-frame of this. Moreover, after almost three months of war, both sides are exhausted and may crave a break in the intense fighting – to rest, regroup and resupply their forces. However such a ceasefire might come about, it would also create an opportunity for negotiations, not least because any subsequent change in the status quo achieved by then would only be possible at probably intolerable costs.

The increasing engagement of the United Nations in mediation efforts and the recent “Presidential Statement” from the UN Security Council, which was also supported by Russia, indicate that a return to negotiations may be feasible in the near future.

As a “no war, no peace” situation may develop similar to what happened in 2014-2015, the west must remember the ill-fated Minsk Agreement of February 2015. New negotiations with Russia now need not, and should not, entail any concessions that legitimise Putin’s aggression. Moscow needs to fail in Ukraine and visibly so to deter future adventurism. But for that to be possible, negotiations need to happen and they will not even start as long as one side still believes that it can win on the battlefield. Even once the realisation sets in that this may not be possible, both sides will still aim to improve their positions on the ground before the war grinds into a stalemate.

The west therefore needs to further increase pressure on Russia. This means, for example, implementing the EU’s sixth sanction package and subsequently extending it in line with the G7 statement of May 8, 2022. At the same time, military support of Ukraine needs to continue and expand. Weakening the Russian war effort and strengthening Ukraine’s defence capabilities will be critical to minimise Kyiv’s losses – territorial and otherwise – and enhance its bargaining position in future negotiations.

Stefan Wolff receives funding from the United States Institute of Peace. He is a past recipient of grants from the Economic and Social Research Council of the UK, the British Academy, the NATO Science for Peace Programme, the EU Framework Programmes 6 and 7 and Horizon 2020, as well as the EU's Jean Monnet Programme. He is a Senior Research Fellow of the Foreign Policy Centre in London and Co-Coordinator of the OSCE Network of Think Tanks and Academic Institutions.