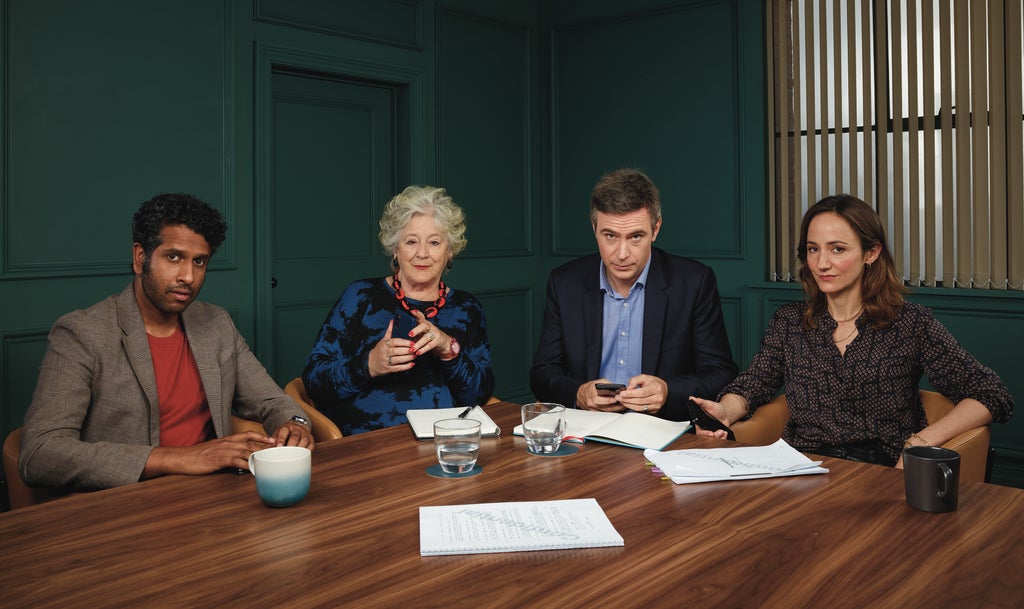 id the world need a British version of Call My Agent!, the très fabulous French comedy about a talent agency? When it was first announced, the fact that it was to be made by John Morton, the brains behind W1A, was an encouraging sign – his send-up of the BBC and its smug, jargon-laden circle-jerk departments was wincingly enjoyable. But after watching it? I’ve decided the world would probably have been happier with another series of the original Call My Agent!, and another series of W1A. This? Comme-ci, comme-ça.

The original series began with the founder of ASK, a leading Parisian talent agency, kicking the bucket on holiday. Things got cutthroat quickly, with the agents squabbling over his top clients, their wide-eyed assistants mutely watching the action unfold with incredulous eyes. The action here cleaves close to the original – at least in the first two episodes available for preview – with Jim Broadbent as Richard, the smiling patriarch who has a heart attack and leaves the agency (renamed Nightingale Heart) in total disarray.

The characters are the same, too – Jack Davenport is Jonathan, the same hawk-eyed operator as Roger Allam lookalike Mathias; Lydia Leonard is Rebecca Fox, the no bulls*** stylish trouser-wearing role that made Camille Cottin a star; Prasanna Puwanarajah is Dan, AKA the nice, scruffy Gabriel, and Maggie Steed is Stella, otherwise known as the wise, dog-carrying Arlette. Fola Evans-Akingbola is the wannabe actress receptionist, Rebecca Humphries is Jack’s ruthless assistant (“I’ve put you next to Charlotte because she’s your wife,” she explains of her seating planning), Hifu Quasem is the newbie who knows one of the agents better than she’s admitting, and Harry Trevalydwyn is… well, he’s Hervé.

Even the cameos have the same storyline: an actress told she’s too old for a role (Kelly McDonald), and two stars told they’ve both got the same part (Olivia Williams and Helena Bonham Carter). The main difference is that everyone says, “yes, no, absolutely” a lot, in the manner of meetings in W1A.

There’s something slightly self-conscious about it from the start. In the first episode’s opening moments, everyone paces around saying Phoebe Waller-Bridge a lot – “you can’t move lunch with Phoebe-Waller Bridge!!!” – to impress upon us that we will be dealing with famous people. The place is adorned with film posters to show that the famous people have done famous things. I spotted a poster for The Wicker Man, and two latter day Richard Curtis films. Did the props department get a job lot from a divorcing couple?

But the main sticking point is that it feels like the squandering of a brilliant opportunity. Call My Agent! worked wonderfully as a satire sending up the rich and famous, and the excesses of their silly, ego-fuelled world. This could have been just as good, if not even better, because… this is London! Land of the luvvies! But where the original was chaotic in a chic way, this all feels a bit bumbling and stuffy. It’s not Siobhan Sharpe, it’s Ian Fletcher. There was a warning sign early on when a cameo from Lorraine Kelly was criminally unmilked.

One addition that does go some way to nailing the strange mix of sentimentality and insincerity in the luvvie world is Simon Gould, a tragic, wispy haired thesp played by Tim McInnery. Always on the verge of tears, always one step away from sabotaging his teetotalism, he pops up calling everyone “darling man” and strongarms them into favours they’d be otherwise too depressed not to give. He’s excruciating, but most importantly – he’s excruciating in a British way. It magnifies the show’s biggest mistake, which is a timidness about adding its own sense of character.

If you haven’t seen Call My Agent!, which was one of the most sumptuous pleasures of lockdown telly bingeing, you might enjoy this more than me. It’s perfectly watchable. But if you have… you may find it’s just missing that certain je ne sais quoi.

Ten Percent is on Prime Video from April 28

2022-04-25
Previous Post: Jez Butterworth’s Jerusalem is back in the West End – but is it still a great play?
Next Post: National service in Britain: why men who served don’t think we should bring it back