COVID was leaked from a Wuhan lab in the “cover up of the century” that is “worse than Watergate”, former intelligence chiefs and diplomats have claimed.

The Wuhan Institute of Virology (WIV) – a high security facility specalising in coronaviruses – has been in the eye of the storm as questions rage over whether Covid could have escaped from its lab. 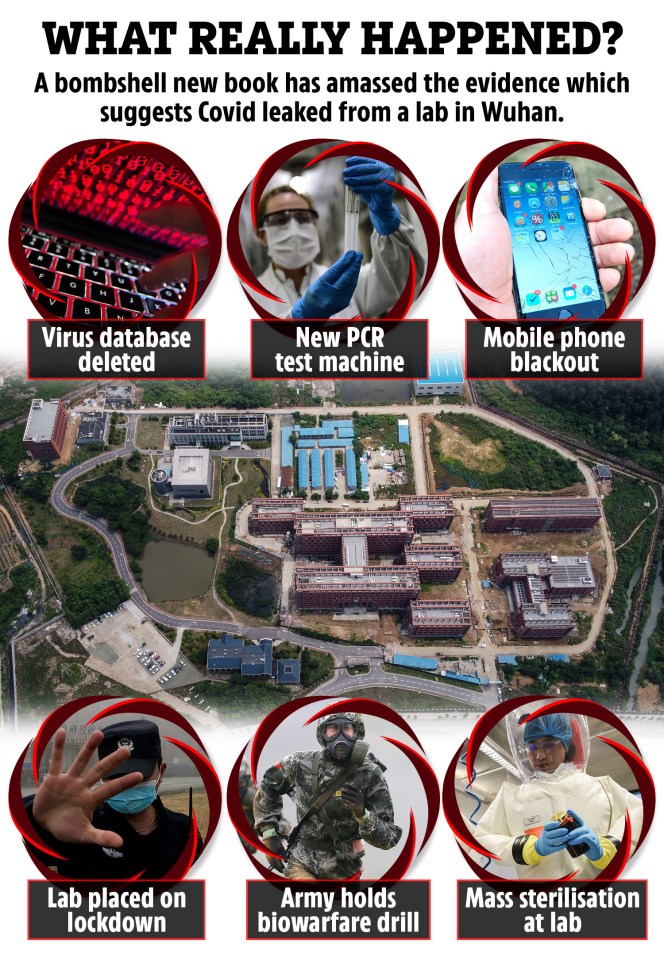 Both China and the lab have furiously denied any allegations, but top former intelligence bosses said the evidence of a lab “accident” is clear to see – and there has been a calculated cover up “from day one”.

Evidence of a lab leak has been piling up over the last year as scientists, researchers and governments hunt for answers.

Dozens of scientists have suggested Covid could have escaped from the Wuhan lab through an infected researcher, improper disposal of waste, or potential breaches in the security at the site.

There was also an “intense” period of “unusual and explained activity” in Wuhan in the weeks leading up to the pandemic – raising suspicions about a virus outbreak and mass sterilisation at the lab.

The city’s airport was locked down for days, there was a blackout period at the WIV with no signs of mobile phone activity, and security was massively ramped up at the site.

But China has refused to cooperate with a full-scale probe into the origins and experts said the the cover up is continuing today.

Drivers must display £1.50 sticker or UK number plate while abroad from today

MA'AM WITH THE GOLDEN GOWN

Desperate search for two girls, 12, who disappeared after school drop off

Sharri Markson’s What really happened in Wuhan has uncovered a string of clues pointing to Beijing’s “comprehensive well-thought-out” effort to hide the evidence.

And former Secretary of State Mike Pompeo told Markson: “You launch a full-scale cover up only when there is something you very much want to make sure doesn’t become the factual narrative.

“I must say this was a comprehensive well-thought-out, Beijing-centred, constant ongoing effort to obfuscate any capacity for the WHO, any Western country or any scientist to determine patient zero and the origination of this virus.

“And it’s ongoing, This is one of the things that people don’t realise, the cover-up continues.”

This is the cover-up of the century. This makes Watergate look easy

America’s former top diplomat in East Asia, David Stilwell, said: “This is the cover-up of the century. This makes Watergate look easy.”

“People are for some reason bent on insisting on having a slam-dunk, air-tight case that China produced this virus,” he added.

“Of course the PRC is not going to let you in there to see their labs, but so many people have used that problem to stop further inquiry.

“This isn’t a legal case, we are not looking for indisputable evidence; there is enough circumstantial evidence.”

Some of the key evidence of inexplicable activity which Markson presents in her book is the ongoing question about wiped virus databases at WIV – which some have speculated may continue key data about the origin of Covid.

The databases containing 22,000 viruses were taken offline in September 12, 2019, three months before China officially warned the world about the virus.

And on the very same day WIV appeared to kick off a spending spree as they ramped up security at the lab, replaced their air ventilation systems and purchased a new medical waste incinerator.

Two months later in November, the lab also purchased a new PCR testing machine – a bit of kit that has become so familiar to the world since the pandemic.

Meanwhile, there appears to been a mass sterilisation cleaning of the lab and a lockdown in October 2019.

Roadblocks are reported to have been erected around the lab and there was a blackout of mobile phone data around the facility, with one intelligence source telling Markson some considered this a “smoking gun”.

And a former Donald Trump administration official described this activity as “consistent with the protocol for a biological incident occurring at a laboratory”.

During this same period airline flights leaving Wuhan were stopped – with an unusually high number of cancellations.

And meanwhile an anti-coronavirus military exercise was also carried out at Wuhan airport and in the city’s hospitals just months before the pandemic.

For investigative journalist Markson, this evidence combined with the wealth of other interviews and research has lead to the conclusion that the virus most likely came from the lab.

And some scientists have also argued the virus itself is covered in the “fingerprints” of genetic manipulation.

And former MI6 chief Sir Richard Dearlove said the “weight of evidence” suggests Covid leaked from a lab during gain-of-function research at the WIV – but it was deliberately covered up right from the start of the outbreak in 2019.

“If you look at the evidence coldly, the likelihood is this is an escape from a laboratory, and it’s up to the Chinese to demonstrate conclusively to us that it isn’t, not just to tell us,” he told Markson.

He added: “I’m not saying they deliberately released it, I’m saying this is a Chinese accident but there was a cover-up from day one.”

Sir Richard said it wasn’t just China setting the narrative – he said the government was running a “full-blown disinformation campaign”.

“I always thought whether it was the wet market or the lab was somewhat immaterial given the history of past health crises; they keep coming out of China and affecting the entire globe,” he said.

“What amazes me is the whole world hasn’t banded together and just said, enough is enough, you guys need international supervision. “

Peter Jennings, former Deputy Secretary of Australia’s Defence Department, also highlighted the huge amount of evidence which all comes back to China’s interest in biological weapons, and the WIV’s classified research on coronaviruses.

“If you put those together that creates a compelling case to say the possibility of a lab accident is actually very high,” he said, adding the cover up has appeared “hysterical” by China.

A high-level Five Eyes intelligence source described the lab leak evidence as “compelling” – but said there has been “active Chinese disinformation”.

Pompeo, who served under Trump as director of the CIA from 2017 to 2018, said it took months to “knock down” the scientific consensus that Covid must have a natural origins.

“This was Chinese propaganda facilitated and put forward by some American scientists as well and if they were professionals they had to know better and yet that was the language,” he said.

In April 2020, Pompeo received a bombshell US dossier about the origins of the pandemic spreading across the globe.

Obtained by Markson, the report compiled by Miles Yu and David Asher said the Wuhan lab was the most likely origin.

Yu, who served as Pompeo’s China policy and planning adviser, believes the lab was researching a Covid vaccine before the outbreak.

China had filed a “user patent” application for Gilead’s Remdesivir – a groundbreaking treatment for Covid – on January 21, 2020.

And this was before China admitted the virus was spreading from human to human.

Yu said the patent suggests “WIV had possessed the novel coronavirus in its lab and had known of its lethality and pathogenicity for a while”.

“It had been actively researching a vaccine before anyone else could succeed, thus giving China the sole patent right,” Yu said in the report.

In his report, Yu described China as a “country obsessed with dangerous viruses” and scientists “often neglect biosafety, with catastrophic consequences”.

Markson, 37, who lives in Sydney with her husband and child, said the US intelligence community appeared to “fall victim” to China’s disinformation campaign.

Prestigious scientific journals blocked the publication of papers from highly respected researchers which pointed to the possibility of a lab leak, and many Western scientists claimed it was a debunked conspiracy theory.

Free speech was censored by social media platforms, with Facebook wiping any content which questioned whether the virus originated in a lab, Markson said.

Although Covid appears to have been ready made to infect humans, Markson highlighted how political leaders, health authorities and global regulatory bodies looked the other way.

She slammed the lack of investigation into the origins of Covid as “unforgiveable failures on so many levels”.

China has repeatedly stated it is not responsible for the global pandemic and dismissed accusations from those who say the virus was manipulated by humans.

Do you have a story for The Sun news desk?

Click here to get The Sun newspaper delivered for FREE for the next six weeks.