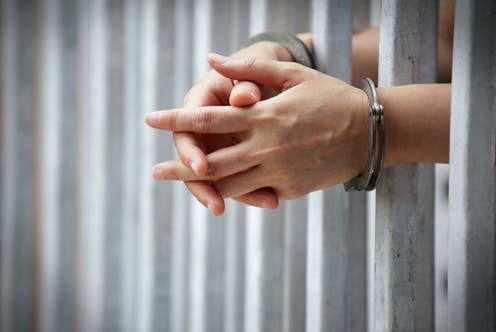 “Ms A”, an 18-year-old woman held on remand in HMP Bronzefield women’s prison in Middlesex, England, gave birth to her first child alone in her cell after her calls for help were ignored.

A new report from the prisons and probation ombudsman provides details on Ms A’s case and the tragic death of her newborn baby.

The report reinforces what campaigners, charities and researchers have been saying for years – and what the prison ombudsman herself admitted – prison is not a safe place for pregnant women.

The details of this case are hard to comprehend and truly harrowing. Ms A described how she became unconscious, and when she awoke, she found she had given birth to a baby who was not breathing. She bit through the umbilical cord, tying it in a loose knot, in an attempt to revive the baby. Ms A was found the next morning in her blood-covered cell, with her bed covers pulled up to her chin and her dead baby daughter tucked in bed with her.

My 2018 doctoral research highlighted the dangers to pregnant women and new babies in prisons, through interviews with 28 women and ten staff members.

I found that women were often left in a similar situation to Ms A where call bells were not answered, especially at night. The staff I spoke with for my report described babies who survived birth in prisons as “lucky”.

According to the ombudsman report, Ms A was regarded as “difficult” and fearful of authority, which staff perceived as challenging behaviour. The report blames maternity services for being “unimaginative and inflexible” in providing her care. My research found that the more pleasant a prisoner was, the more likely she would be to receive appropriate healthcare and entitlements, such as an additional pillow.

How Ms A was subsequently treated was also criticised. Unlike the prison staff, she wasn’t offered bereavement counselling. This lack of emotional support to what was clearly a traumatic event was recounted by a woman in my study:

To have to deal with [a cell birth] is such a trauma, then to come back [to prison] and somebody tell me that, “Oh, we could have lost both of you”, but not explain that, was awful, absolutely traumatic. I’m surprised actually I didn’t go into some form of depression, because all I kept thinking was, well, what do they mean? … I even asked if somebody would contact the midwives, or if they would contact the hospital and just find out what he meant, and nobody was willing to do that. Nobody was willing to find out anything. I still don’t know exactly what happened that night.

The report found that in the case of Ms A “there was no paediatric or neonatal emergency equipment in the prison and no staff were trained in neonatal resuscitation”. The ombudsman recommended stocking prisons with this equipment, but the proposal was rejected.

Newborns often need basic resuscitation as they adapt to life outside the mother. It is indefensible not to attempt to resuscitate a baby because of a lack of equipment or training.

Basic, inexpensive equipment would consist of a bag, neonatal valve and mask, warm clothing and a hat. Some organisations already provide some training for prison officers that would be straightforward to roll out in women’s prisons.

If the government continues to insist on imprisoning pregnant women, many problems will need to be addressed to improve safety.

My research made several recommendations including specialist prison midwives leadership, 24-hour access to maternity care for all pregnant women and midwifery representation on the prison inspectorate.

In May 2016, the Birth Charter was distributed to all prisons in England. This document outlined recommendations for the care of pregnant women and new mothers in prison, and was written by charity Birth Companions with the Royal College of Midwives, with guidance from Unicef.

The Royal College of Midwives put out another report highlighting best practices for maternity care in prisons. While these documents made similar recommendations, they have never been widely put into practice.

Prison systems are impenetrable for those on the outside. This includes midwives, who may be unfamiliar with the complex and rigid prison system, and who have to rely on staff to take them into prisons with their strict timetables. Yet even with the best midwifery services, if a call bell from a woman in labour is not answered and she is not swiftly transferred to the local maternity unit -– the outcomes are likely to be devastating.

Ms A had nobody to advocate for her. Having peer support may have helped to break down barriers for Ms A who, understandably, had concerns with authority. Midwives are not in prison at nighttime, but peer supporters may offer a supportive conduit between the woman and maternity services. The charity Birth Companions trains and supports prisoners to be maternity volunteers, so they are available through the night, similar to “listeners” trained by the Samaritans.

New mandatory guidance was published this month, separate from the ombudsman report. It lays out requirements for how prisons should support pregnant women and new mothers in prison, including those who are incarcerated in mother and baby units, and those who are separated from their young children (up to age two).

But if these instructions are not applied in practice, all this new guidance does is improve what we see on paper, especially if very basic responses to cries for help are left unheard.

Laura Abbott does not work for, consult, own shares in or receive funding from any company or organization that would benefit from this article, and has disclosed no relevant affiliations beyond their academic appointment.