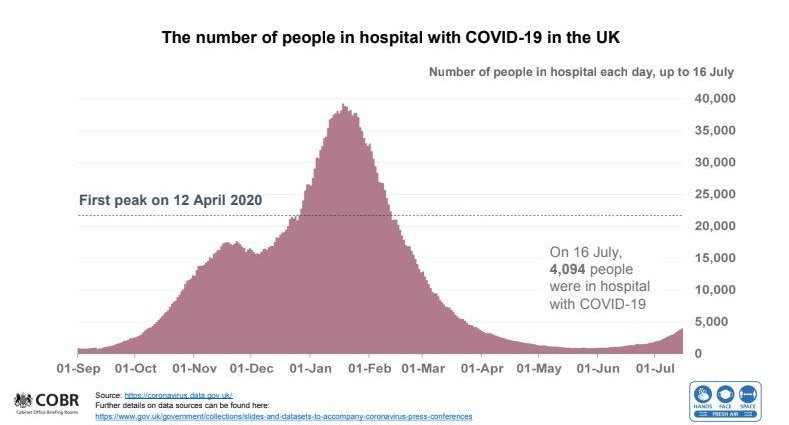 AROUND 60 per cent of Brits being admitted to hospital with Covid-19 have received two vaccines, a government adviser has said.

Millions of people have now received two doses of the Covid vaccine, as the country stepped out of the final set of restrictions for Freedom Day today.

Data from the government’s coronavirus dashboard shows that at present, around 4,094 people are in hospital with Covid-19.

Of that, around 573 people are currently on a ventilator, with the number of people being admitted on a daily basis currently at 742 each day.

Addressing the nation this evening alongside Prime Minister Boris Johnson Britain’s Chief Scientific Adviser Patrick Vallance said: “In terms of the number of people in hospital who’ve been double vaccinated, we know it’s around 60 per cent of the people being admitted to hospital with Covid.”

Experts have hailed the vaccine as the reason why Covid deaths have not surged – despite the fact that a further 39,950 infections were recorded today.

Vaccines help prevent against severe cases of Covid – but no vaccine is 100 per cent effective.

Today’s data shows that hospitalisations have risen by 44 per cent in the last two weeks and that fatalities increased by 19 today.

Deaths have dropped from the 29 recorded a week ago and also remain below the 23 reported a fortnight ago.

However, Sir Patrick’s comment tonight shows you can still catch and carry the virus even if you’ve had both jab – which is why it’s still important to take tests and isolated when you are instructed to.

Speaking this evening, Mr Johnson urged Brits to continue to get their vaccines after it was earlier announced that kids over the age of 12 who were vulnerable will get a jab – alongside those on the cusp of turning 18.

Sir Patrick also explained that freedoms such as nightclubs being opened – which saw Brits partying last night, were only possible because of the vaccine rollout.

“Right the way across the world we’ve seen that nightclubs and venues where you’ve got lots of people indoors, crowded together, are a focus for potential super spreading events, and that has also been seen in terms of what’s happened in Holland and Israel where nightclubs opened, and you saw a big increase in cases.

“And I would expect that with opening of nightclubs, we’ll continue to see an increase in cases and we will see outbreaks related to specific nightclubs as well.

Explaining hospital admissions he said it was “a somewhat different picture” as the numbers are expected to increase, although not to the same extent as before.

We do expect there to be over 1,000 people per day. Being hospitalised with Covid because of the increase in infections, but the rates should be lower than they have been previously because of the protective effects of vaccination,” he said.

Most regions of England now have more Covid-19 patients in hospital than at any point since mid to late March, the latest figures show.

What to expect from post-pandemic voting behaviour

Covid cases fall for a fourth day with 31,795 new infections in 24 hours