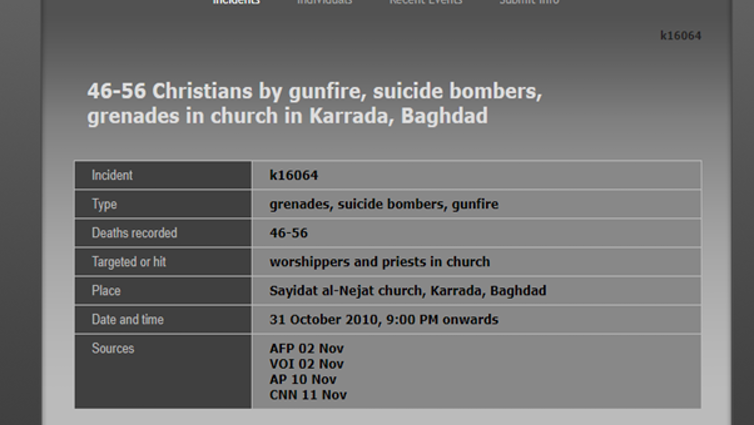 Recording casualties during a conflict can provide a body of evidence of how violence has affected particular communities or groups, such as the Yazidis in Iraq and the Kurds in Syria. When the Islamic State entered Iraq in 2014, they immediately started committing gross human rights violations and displayed violence of an increasingly sectarian nature against religious and ethnic groups, including Christians and Yazidis.

But as Pope Francis makes the first papal visit to Iraq, it’s important to note that violence against Christians in the troubled country had started years earlier – shortly after the overthrow of Saddam Hussein’s regime in 2003. The insecurity that followed the power vacuum enabled extremist elements to form deadly groups – such as al-Qaida in Iraq – to target those that the Iraqi dictator, who had ruled as a secular leader, had been protecting.

Since 2003, Iraq has been in a state of insecurity that allows terrorist and insurgent groups, tribes and militia to express their intolerance and hatred towards religious and ethnic “others”. When the Islamic State took control of Mosul in the summer of 2014 and began its atrocities against civilians, the ground was already very fertile.

The invasion of 2003 was an example of regular warfare: a coalition of states attacked and invaded another state. But when the war was declared over, an irregular war began that continues to this day – a war that has affected the lives of over a million of Iraq’s Christians.

Nine months later, on March 13 2008, the body of Paulos Faraj Rahho, Archbishop of Mosul, was found buried in a shallow grave. He had been kidnapped two weeks earlier, after speaking out against religious extremists.

The biggest attack against Christians, however, came two years later, when gunmen and suicide bombers entered Sayidat al-Nejat church in Baghdad, killing 56 people, a four-year-old child and two babies among them.

The al-Qaida-linked Islamic State of Iraq claimed responsibility for the attack. It was a precursor of the catastrophe that was to unfold in 2014, when the Islamic State of Iraq and Syria issued a decree that all Christians must either leave their homes, or be killed. Mass exodus followed, leaving Mosul almost without Christians, whose land and property fell into IS hands.

The choice was between genocide and ethnic cleansing. The vast majority chose the latter, and by October 2014 an estimated 1.8 million Christians and Yazidis had fled their homes, according to the UN Human Rights Office and the UN Assistance Mission for Iraq. Branding others as “apostates”, religious extremists have justified attacks such as abductions and executions against “others” who do not conform to its takfiri doctrine sanctioning violence against non-believers, as well as the destruction of places of religious significance.

Iraq in 2021 is a state still ruled by the fear of daily attacks by militia, terrorists and insurgents. Small numbers of individuals, operating in cells and groups, have consistently and deliberately targeted the unarmed population to spread fear and death. Insurgents have conducted attacks using guerrilla tactics designed to inflict ever-increasing losses on the government.

Methods used have included hit-and-run raids, ambushes, mortar and rocket attacks and IEDs. There have been dramatic attacks killing hundreds, but mostly smaller and less dramatic day-to-day violence that kills one or two people at a time.

In 2021 we continue to witness a violent struggle in Iraq, among state and non-state actors, for legitimacy and influence. In the first two months, 107 civilians and 218 combatants were killed. Iraq Body Count recorded those deaths, those lethal incidents. But there are hundreds more incidents painting the picture of a country still at war, with IEDs exploding with predictable regularity, as well as suicide bombers, shootings, abductions and airstrikes.

My recent book Body Count; the War on Terror and Civilian Deaths in Iraq, narrates the impact of regular and irregular wars on the unarmed population, moving beyond statistics to tell the story of the casualties that need to be remembered not as collateral damage or mere numbers, but as the individuals they were.

Academics tend to think of the world in terms of power, states, interests and structures. But as a casualty recorder it is Archbishop Paulos Faraj Rahho, abducted and killed at 65; it is subdeacons Basman Daoud, Wahid Esho and Gassan Bidawid, shot dead because they would not convert. It is ten-year-old Rafid Georgis, blown up as he sat in church. It is those teachers, farmers and children that drive me to record and document this violence against the innocents.

Lily Hamourtziadou does not work for, consult, own shares in or receive funding from any company or organisation that would benefit from this article, and has disclosed no relevant affiliations beyond their academic appointment.

2021-03-05
Previous Post: ‘Backup’ pacemaker discovery in goats could have important implications for human hearts
Next Post: Why Nicola Sturgeon and Alex Salmond were grilled by Scotland’s parliament – a legal expert explains