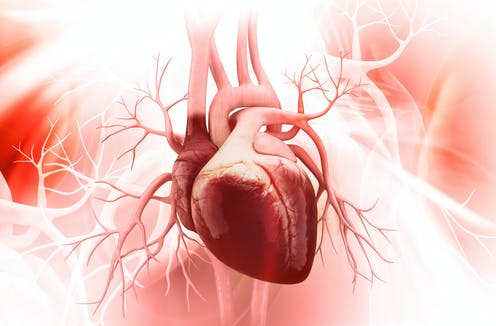 Around sixty times every minute, your heart beats, delivering nutrients and removing waste from every cell in your body. It has been doing this since you were in the womb – the heart forms 18 days into foetal development and begins to pump blood about three days later.

But for all we know about this vital organ, researchers are still learning new things about it.

In fact, a recent study in goats found the heart has a built-in “reserve pacemaker” which has the potential to take over when the mechanism which normally ensures the heart keeps beating, known as the SA node, fails.

This could have important implications for humans, whose heart is very similar in structure, particularly in studying conditions that affect the SA node, such as arrhythmias.

The heart is made of a cardiac muscle. Unlike other muscles in the body (like those controlling our eyes and legs), we can’t control it. Instead, the heart’s speed is controlled by the autonomic nervous system.

The nerves that relay input about our required heart rate connect to a specialised centre in the wall of the right atrium (one of the heart’s four chambers), known as the sinoatrial (SA) node.

The SA node is composed of specialised pacemaker cells, which send out an electrical impulse throughout the cardiomyocytes (cardiac cells), ensuring the heart beats properly.

But the SA node can be dysfunctional. These faults can be acquired or inherited. Acquired dysfunction is more common, often caused by age, certain medications and lifestyle factors such as an increased BMI, diabetes and hypertension. Many people who have a dysfunction may not have symptoms.

One of the most common symptoms of a dysfunctional SA node, experienced by approximately two million people a year in the UK, is an arrhythmia. This is where the heart beats too fast, too slow or irregularly.

There are a variety of treatment options for arrhythmia including medication, cardioversion (electric signals used to get heart rate back to normal), pacemakers (a medical device that delivers electrical impulses) and cardiac ablation (using energy delivered through tubes inserted into your vessels to destroy the heart’s damaged or malfunctioning tissue).

These techniques have mixed levels of success and any surgical intervention carries risk.

New research might change our understanding of how the heart works. A study from researchers in the UK, Pakistan, and Poland found that other areas of the heart located around the SA node can also act as a pacemaker – particularly in instances where the SA node has stopped functioning, such as in the case of an arrhythmia.

The researchers found that the nearby subsidiary atrial pacemaker takes over when the SA node fails, and keeps the heart beating as normal.

Although the study was conducted on goats, these results are still promising for humans, as our hearts share many similarities in structure and function.

The findings are particularly exciting as they may present new opportunities for treating SA node dysfunction through potentially less invasive means, where natural populations of cells near the SA node, such as in the subsidiary atrial pacemaker, show the ability to take over as the dominant pacemaker of the heart, and keep it beating as normal.

The development of the SA node and how it grows is still not fully understood, so it comes as no surprise to some that there are other similar cells present in the heart with similar capabilities.

The subsidiary atrial pacemaker that has been discovered will require further investigation to see whether these cells come from SA node cells as they develop, or if they migrate to their location or form from elsewhere in the heart.

When the study’s researchers performed an electrocardiogram (ECG), which checks the heart’s rhythm and electrical activity, they found remarkable similarities between the activity of both the SA node and subsidiary atrial pacemaker. The electrical activity of the heart and its output was maintained even when the SA node had failed, showing that the cells of this “backup” pacemaker are more than up to the job. The presence of certain key proteins shows these subsidiary cells can generate enough power to keep the heart functioning as normal.

The discovery of this “backup” pacemaker may provide the answer as to why performing a cardiac ablation on people with a dysfunctional SA node isn’t always successful.

As we begin to understand more about this new structure, it may be that there is a reduced need for artificial pacemakers to be fitted for SA node conditions.

2021-03-05
Previous Post: What’s really behind Rishi Sunak’s decision to move part of the Treasury to Darlington?
Next Post: Pope Francis in Iraq: visit highlights recent history of atrocities against Christians