What’s really behind Rishi Sunak’s decision to move part of the Treasury to Darlington? 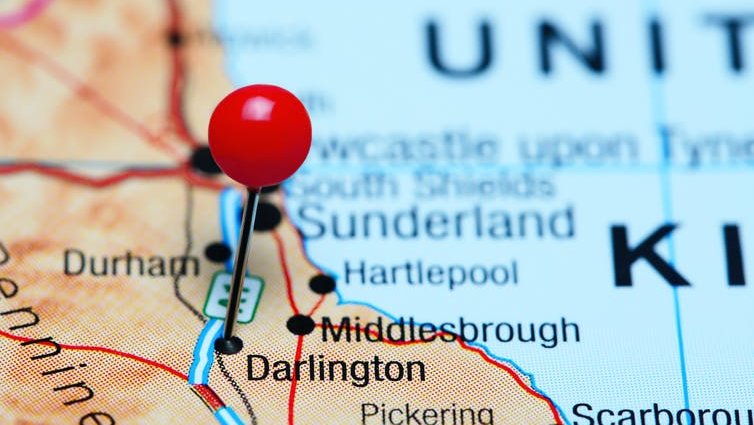 The idea of relocating Whitehall departments to the regions has a long but rather mundane history in the UK. Already, more than 80% of civil servants are based outside London – probably higher than most of us assume, given Britain’s highly centralised political system.

If we exclude the Ministry of Defence (which is concentrated in the south west), the north east has more civil servants than any English region beyond the capital. This is one of the many reasons why the Treasury’s decision to partially relocate itself to Darlington, which straddles County Durham and Teesside, is rather surprising.

The expectation that other departments will follow the Treasury to the market town as part of an economic “campus” will be particularly hard to swallow for Sheffield, for instance. The city experienced the closure of its Department for Business, Energy and Industrial Strategy office in only 2018, resulting in hundreds of job losses.

Nevertheless, even if the civil service is less London-centric than we might believe, the headcount outside the capital has taken a bigger hit from austerity since 2010 than those in departmental headquarters. This compounds cuts to local government throughout the regions. Darlington will gain 750 Treasury employees but its council reported in 2017 that it had lost 730 jobs since 2010 as a result of budget cuts.

The distribution of power within the civil service is also geographically uneven. Hardly any senior civil servants are based outside London. To use the above example again, Sheffield remains the home of the government-owned British Business Bank, but all of the organisation’s policy and executive staff are located in London.

As a secondary base for Britain’s central finance and economics ministry, Darlington is not without advantages. The town serves as the gateway between the Yorkshire dales and the north east region. It is close to the graduate-producing cities of Newcastle and Durham, but significantly closer to London in terms of journey times. It also happens to be the closest large town to chancellor Rishi Sunak’s North Yorkshire constituency.

As many have pointed out, however, a government serious about recruiting a more geographically diverse cohort into the upper ranks of officialdom might opt instead for one of the north’s major cities, such as Manchester or Leeds. Those cities would offer a significantly larger pool of “talent” for the Treasury to draw upon than what could be available in Darlington or even the wider north east region – though it should be noted that Leeds, while missing out on the Treasury, will be home to the new National Infrastructure Bank.

But this argument is hardly flawless. How much would adding another public sector employer – indeed, just one or two divisions of what is actually Whitehall’s smallest department – bring to diverse economies like Manchester or Leeds? These cities already provide an array of employment opportunities for their middle-class graduates – a very large proportion of which are migrants from elsewhere in the UK. Many local economic development experts are locked into a city-led development model which has failed to benefit the less well-off residents of large northern English cities.

The politics of towns

It is revealing that the chancellor has chosen a so-called “red wall” town for this project. This decision is unlikely to have resulted, however, from any serious analysis of the flaws of city-led development. Rather, it arises from – Sunak’s work/life balance aside – the political value of places like Darlington to the current government. Boris Johnson’s electoral coalition combines traditional Tory heartlands in the affluent south east with Brexit-voting areas in the north and midlands.

Because of this, new local government funding pots such as the Towns Fund and the Levelling Up Fund are skewed heavily towards towns and small cities in Conservative-held constituencies. The “levelling up” agenda in general is a move away from the Treasury’s pre-2019 practice of focusing regional policies on Labour-held cities – even under Conservative-led governments. The notion of devolving policy powers to cities and regions has also disappeared, despite 2016’s promise of “taking back control”.

However, while Darlington probably seems like the archetypal red-wall constituency in the privilege-infused worldview of the Johnson government (it returned a Conservative MP at the 2019 election, by a very narrow margin, for the first time since Thatcher) others see things rather differently.

For example, Andy Preston, independent mayor of Middlesbrough – one of Darlington’s Tees Valley compatriots – has argued that relocating the Treasury to Darlington, “doesn’t make any sense. Darlington doesn’t have any more need of levelling up than many towns in the south, so the government’s decision looks odd at best”.

Darlington’s traditional strength in the railway and engineering industries has given way in recent years to a more gentrified economy. This might come as a relief to Treasury mandarins about to venture northwards for the first time. But it demonstrates that genuine spatial rebalancing is less of a concern for the government than its rhetoric suggests.

Craig Berry is a member of the Labour Party.

2021-03-05
Previous Post: How the world ran out of semiconductors
Next Post: ‘Backup’ pacemaker discovery in goats could have important implications for human hearts