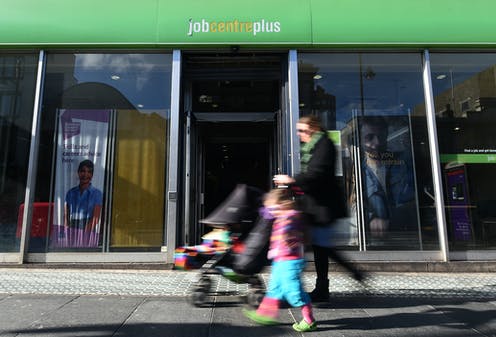 As part of the UK government’s latest budget, Chancellor Rishi Sunak has announced that the £20 weekly universal credit uplift introduced at the start of the pandemic would be extended until September while working tax credit claimants will be afforded the equivalent of a one-off £500 payment. To understand how these changes will impact claimants, we first need to look back at how the system has functioned since the pandemic.

Amid soaring demand after the first lockdown, the “flagship” working-age benefit universal credit received 1.8 million new claims in the five weeks spanning the end of March and beginning of April 2020. Although the Department for Work and Pensions (DWP) moved swiftly to process these cases, our research raises major concerns about aspects of that application process and payment levels during that time.

This budget is a critical moment for the benefits system, especially when it comes to extending the increase in payments introduced at the start of the pandemic. But as our research indicates, it’s important to understand just how challenging it will be for benefits claimants to continue to survive in the months ahead, even with that extra £20 a week.

Drawing on a national survey of 6,431 claimants and 74 in depth interviews (the largest project in the UK on the benefits system during the pandemic) our report has called for a major review of the system. Authors of the report also include Ben Baumberg Geiger, Daniel Edmiston, Andrea Gibbons, Jo Ingold and Eleni Karagiannaki.

The process of claiming

Although the digital by default system has been central to successfully processing universal credit applications, the importance of human interactions can’t be underestimated. Looking in greater detail at the first few months of the first lockdown, our survey shows that almost half (46%) of new claimants experienced some sort of difficulty applying for benefits. Issues tended to relate to telephone accessibility, calculating household income and expenses, providing information about housing or childcare costs, providing supporting documentation to prove eligibility and submitting joint claims as couples.

Tina, a new universal credit claimant told us how the system threw her into “utter panic” because there was “no one to ask” for guidance. She said talking to someone “to either tell me where I’m going wrong or put me on the right path” would’ve been helpful. Many claimants were particularly confused by the amount of benefits they were eligible for, but also the disparity between what they thought they would receive when they used the benefits calculator and what they actually received. Jacob, another new universal credit claimant we spoke to told us that he “used a claim calculator” that told him he was “entitled to £1,000 something”. When he received the money, however, it was £200 short of the estimate.

Although a number of claimants spoke with what they described as kind and caring staff on the telephone, many were less confident about staff having the expertise and experience to answer their queries. This was likely because of the redeployment of staff from other roles or departments. Because of these issues, it was common for people to seek extra advice and support outside the DWP, sometimes through networks that could be providing less accurate advice, such as social media and family and friends.

The DWP’s changes to the working-age benefits system by raising the basic element of universal credit by £20 per week had a huge impact on how people survived. Benefit claimants who didn’t receive the increase, such as those on “legacy” benefits (e.g. jobseekers’ allowance and employment and support allowance), were most likely to have experienced food insecurity, for example, in our research.

However, claimants who did receive extra money still struggled with a considerable gap between their basic cost of living and the amount of benefit they received. Almost 60% of new benefit claimants and 43% of existing claimants (those who had been claiming since before the pandemic) experienced a drop in their income which they weren’t able to manage by simply reducing their spending. Around half of claimants experienced some form of more severe financial strain, including falling behind on housing costs or not being able to afford daily fresh fruit and vegetables.

People used a range of strategies to “get by”, including relying on credit cards, overdrafts or bank loans, or borrowing from friends and family. It was evident that people had to make difficult choices about their income, with housing costs often being the most difficult to cover.

When we conducted our first wave of research from May-September 2020, autumn of 2020 was the goal for returning to employment. Complex COVID-19 tier systems and national lockdowns have since disproportionately impacted sectors of the economy and regions of the UK, putting a time limit on claimants’ ability to cope financially as resources and coping strategies begin to run out.

As time goes on, the challenges of poor job market conditions and prolonged benefit claims remain, meaning these strategies for “getting by” are more likely to be exhausted. The budget should have been a chance for the government to think more ambitiously about what “success” means within our benefits system. Keeping the £20 uplift as a permanent measure and extending it to all benefit claimants was always going to be vital. But without addressing fundamental issues about payment levels, the system will continue to leave people struggling.

Lisa Scullion receives funding from the Economic and Social Research Council as part of UK Research and Innovation’s rapid response to COVID-19, and also from the Health Foundation.

David Robertshaw receives funding from the Economic and Social Research Council (as part of UK Research and Innovation’s rapid response to COVID-19 and via the Digit Innovation Fund). He is also a member of the Labour Party. He is writing in a personal and non party-political capacity, and the views expressed in this article should not be interpreted as the official position of any of those organisations.

Kate Summers receives funding from the Economic and Social Research Council as part of UK Research and Innovation’s rapid response to COVID-19.

Robert de Vries receives funding from the Economic and Social Research Council as part of UK Research and Innovation’s rapid response to COVID-19.

2021-03-03
Previous Post: Male fertility: how age affects men’s chances of having children
Next Post: Answer to the 2021 Budget, Luke Pollard, the MP for Plymouth Sutton and Devonport